Study looks into cause, prevention of long-term cancer-treatment effects 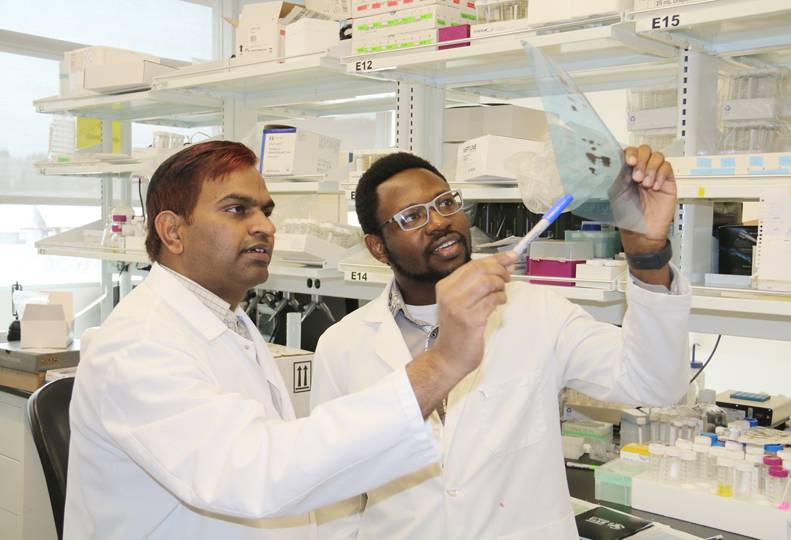 Washington State University researchers are studying long-term side effects of radiation therapy in some cancer patients that can lead to heart disease and eventually heart failure.

New research conducted by Shobhan Gaddameedhi and Panshak Dakup, of the WSU College of Pharmacy and Pharmaceutical Sciences, in Spokane, suggests that attention to a patient’s biological clock could help prevent heart damage during radiation therapy, specifically for those being treated for breast, lung, and esophageal cancer.

The biological clock, also known as the circadian clock, is the system in the body that controls the occurrence of natural processes such as waking, sleeping, and aging.

“Biological clock is important for sleep cycle and up to 50% of gene regulation,” says Gaddameedhi. “It’s why we wake up active, and after a good day become tired and sleep. However, with social demands such as night shifts and other external disruptions, such as light at night, we begin to see negative effects on our health, including increased risk for cardiovascular issues, cancer, and other diseases. Understanding how biological clock regulates natural processes can help us find ways to prevent some of these effects in people whose lives are regularly experiencing those disruptions.”

The two researchers say their study started in summer of 2017 as part of a predoctoral fellowship awarded to Dakup through the American Heart Association, with additional support from the National Institutes of Health. In the study, the pair of researchers used lab rodents to determine whether the biological clock is involved in heart toxicity from radiation therapy and if it could be used as part of a strategy to reduce this toxicity.

He explains that the first group consisted of mice with DNA that had been manipulated while they were still embryos to eliminate certain genes that control the body’s master biological clock.

“We targeted the regions of that gene that would be important, inserting a mutation that would cause it to dysfunction,” he says. “This would help determine that removal or dysfunction of those genes was definitely connected to increased damage.”

Dakup says the groups first had their heart function measured to establish a baseline of function before any treatment.

“We then exposed them to a similar dose of radiation as breast cancer patients receive mid-point of their radiation therapy,” he says.

Although breast cancer patients usually are exposed to such levels of radiation over a multi-year treatment plan, Dakup says the mice had to be exposed over a shorter period of several weeks due to their comparatively short lifespans.

“After radiation, we monitored the mice’s heart function for six weeks, measuring the decline in heart function—the heart’s ability to pump blood out into circulation—as a percentage,” he says.

“We were able to see that the two groups with disrupted biological clocks had significantly worse heart function and more heart scar tissue than the control group of mice,” he says.

Gaddameedhi and Dakup say the study also included additional analyses to determine how a particular biological clock protein, known as Bmal1, helps protect the heart from radiation damage. They describe Bmal1 as a cyclic protein, meaning different levels are present in the blood at different times in a 24-hour cycle, responsible for regulating circadian rhythms and the expression of different genes.

“We noticed we found less of Bmal1 in the clock-disrupted groups compared to the control mice. The control mice had higher levels of Bmal1 and less DNA damage, which we felt was significant,” Gaddameedhi says. “So, we tried removing Bmal1 through genetic depletion and pharmacological inhibition, and in both conditions, there was increased damage in the heart cells, which in turn may diminish heart condition and function.”

Gaddameedhi and Dakup also found that Bmal1 interacts with other DNA damage response genes that are important in fighting against radiation-induced DNA damage and cell death.

“If Bmal1 is present and able to bind to those genes, it can help them repair damage,” says Dakup. “The groups that had Bmal1 removed had more damage after radiation, which confirmed for us that it’s an important tool in protecting from radiation.”

The Journal of the Federation of American Societies for Experimental Biology published the study in December.

Originally from India, Gaddameedhi came to the U.S. in 2002 to pursue his doctorate in pharmaceutical sciences at North Dakota State University and later went on to postdoctoral studies at the University of North Carolina School of Medicine, Chapel Hill.

“I spent six years or so researching and understanding the biological clock’s role in regulating our genes, particularly those that are responsible for repairing DNA damage,” he says.

Gaddameedhi says he first became interested in a connection between biological clock and radiation damage to the heart after reading an article on the subject in Science magazine.

“The article talked about cancer patients who were dying of coronary heart disease and heart failure as little as 10 years after receiving radiation treatment,” he says. “Scientists felt there should be research into how treatment was causing heart damage, and I knew from my own studies that circadian clock plays a role in DNA repair. This led me to explore how it might help prevent or minimize heart damage in those patients.”

For Dakup, improving radiation treatments for cancer patients comes from seeing his own grandfather’s struggles with cancer treatment.

Dakup is from Nigeria and moved to the U.S. in 2011 to pursue a bachelor’s degree in chemistry from Columbia College of Missouri.

“When I left home, my grandfather was going through radiation therapy, and that experience stayed with me. It was always in my mind that I wanted to do research to help make those treatments less toxic and painful,” he says.

He adds that he discovered WSU through an undergraduate research fellowship in 2014 and was inspired to come back to pursue his doctorate.

Looking ahead, Dakup and Gaddameedhi say they’re hopeful that the discoveries made in the study will lead to improved treatment strategies and better outcomes for breast cancer patients.

“We now know that maintaining a healthy circadian clock is important, especially in patients undergoing radiation therapy,” Gaddameedhi says. “Working to maintain that healthy clock could protect the heart from damage in years to come.”

While further research potentially will take up to five years, depending on funding availability, the researchers say their next step will be to test their hypothesis in a cancer model, which will enable them to understand how the biological clock works in tumors versus healthy tissues.

“The goal of the cancer model would be to develop treatments that minimize heart damage while maximizing the ability to kill tumor cells,” says Dakup. “We’d also like to work on therapies based on Bmal1 levels and clock rhythms to find the best dosage and time to minimize toxicity in radiation therapy. Ultimately, all of our research contributes to the greater picture of creating personalized medicine, tailoring therapies to best meet individual patient needs.”