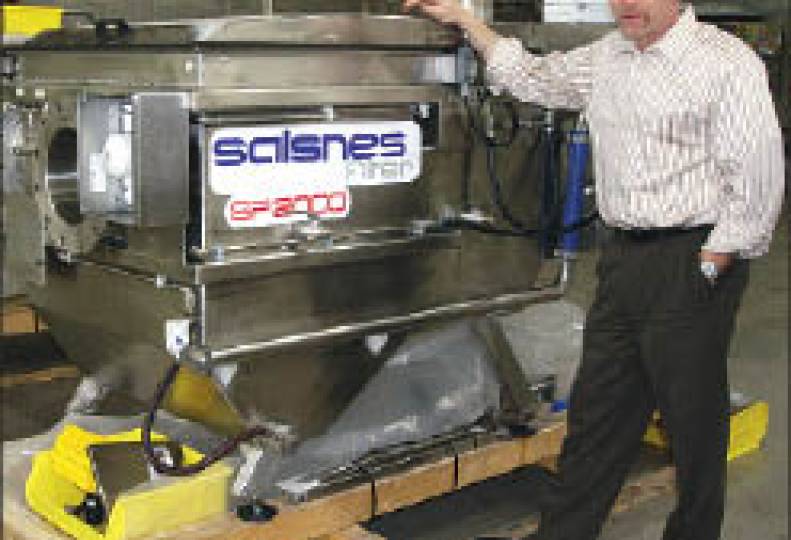 -—Staff photo by Paul Read
Blue Water President Tom Daugherty shows off a Salsnes filter, which would be used in its planned renewable energy system.

Blue Water Technologies Inc., a Hayden-based concern known for its technology that removes phosphorus from wastewater, quietly has been adding to its resume the elimination of other contaminants, and now hopes to perfect a way to produce electricity from the biosolids collected at sewage treatment plants.

The seven-year-old company has been selling its products, all used as components in wastewater treatment plants, in small-scale applications all over the country and as far away as Korea, but, so far, demand for its products hasn't blossomed fully, says company President Tom Daugherty.

Blue Water employs 24 people, many of whom are engineers or scientists, at its 20,000-square-foot headquarters and manufacturing facility near the Coeur d'Alene Airport. Although Daugherty declines to disclose the company's annual sales, he says they'll be somewhere between $5 million and $10 million this year, and that he expects Blue Water to reach profitability next year.

It recently landed a contract to provide about $1 million worth of phosphorus removal equipment for a treatment plant in Marlboro, Mass. Closer to home, it currently is installing similar equipment, under a $400,000 contract, for the city of Plummer, Idaho.

In all, it has roughly 50 installations under its belt, and another nearly two dozen projects in the pipeline or under construction, Daugherty says.

The company's principal technology, which originally was developed by University of Idaho scientists, uses chemically enhanced sand to extract phosphorus from wastewater as a last step before the treated water is discharged back into the environment. In the past couple of years, though, Blue Water has adapted that technology to remove nitrates, and, recently, mercury.

Three years ago, it also became the exclusive distributor in the lower 48 U.S. states of a Norwegian-made filtering system that removes solids from wastewater at the front end of a treatment plant.

It's that equipment, called a Salsnes filter, that would be the centerpiece of Blue Water's next new business line, renewable energy, says Daugherty.

In most wastewater treatment plants, solids that come into the plant typically are separated from liquid sewage using biological digesters and dewatering equipment—or in more primitive plants, using settling lagoons, he says. In many cases, the extracted solids must be trucked away to landfills.

A Salsnes system separates solids from liquids using a specialized filter belt and auger system. Untreated sewage comes into the Salsnes at one end, and on the other end, a pipe sends liquid sewage onto the next phase of treatment, while an auger conveys the solids—in a form known in the industry as "cake" and still containing about 60 percent water—to collection bins for disposal.

That technology alone can save a facility money or increase its capacity, by removing solids that otherwise would have to be digested or removed further along in the process, Daugherty says. The thing about the cake, though, he says, is that it contains methane fibers and other combustibles.

"You could light it with a match," he says.

So Blue Water wants to take the solid-removal process one step further, by burning the collected biosolids to make energy, he says.

To do that, Blue Water would add what's called "gasification" to the process. With gasification, the cake extracted from the sewage would be heated in an environment with little or no oxygen, which would "gasify" it into a synthetic gas, or syngas, that would then fuel a gas turbine to create electricity.

Late last month, Blue Water also announced that it had hired former city of Spokane Mayor Dennis Hession as director of special projects, specifically to help lead what the company is calling its renewable energy group.

Hession, who is a lawyer by trade, earned minors in chemistry and biology in college, and has an interest in environmental matters, Blue Water says. His experience as mayor, and earlier as president of the City Council here, also give him connections in and insight into municipal governments, which are a primary market for the company, Daugherty says.

Next, he says, Blue Water will look for a city with which it can collaborate to test such a system in a demonstration project that it hopes to have operational by late next year. He says the company is looking for a municipality with a treatment plant that processes 8 million to 10 million gallons of sewage a day, which would handle a city of roughly 70,000 residents.

Daugherty says that while the components of such a system are understood individually, used together, "We have to understand better how they would affect the plant's operation. Engineers like data, so we need to give them data."

He says the electricity generated by a system could be used to power other portions of the plant or be sold, but says the energy really would be "icing on the cake," because the real savings from such a system would come from removing more solids at the front end of the system, easing the treatment process further down the line and reducing the need to truck collected solids to a landfill.

He says that once a demonstration project is on line, he expects to win sales of the system relatively quickly, perhaps even in 2012. Costs for such a system aren't known yet. The Solsnes filter alone sells for $150,000 to $300,000, depending on its size. The largest can handle flows of about 3 million gallons of wastewater a day, but multiple filters can be linked together to provide more capacity.

At least in this region, phosphorus removal has become a big issue for municipalities and others that discharge water into rivers. New environmental rules are expected to reduce greatly the amount of phosphorus such point-source polluters can discharge, to well below 50 parts per billion, says Daugherty. He says Blue Water's Blue Pro system is capable of hitting those new thresholds easily.

Although the system is intended primarily for smaller wastewater treatment plants, both the city of Spokane, which handles flows in excess of roughly 40 million gallons a day, and the city of Coeur d'Alene, with its daily flows of about 3.6 million gallons, have bought Pro Blue technology for testing.

Blue Water's technology uses a process that removes phosphorus from wastewater by filtering the water through chemically-enhanced sand. The sand used in the system is coated with hydrous ferric oxide, which gives it absorbent qualities to pick up waste particulates such as phosphorus.

The treated sand works its way through wastewater that normally would be ready for discharge, and as it does so, its coating rubs off and the coating absorbs phosphorus in the water. The system then separates by density the sand, clean water, and denser water that contains phosphorus. The clean water is piped out for discharge, and the dirty water is sent back for further treatment. The sand is recoated and reused.

Daugherty says, though, that phosphorus isn't as much of a hot button in every region of the nation, but rather is watershed specific. Some regions, he says, have greater battles with nitrates or mercury, which is why Blue Water modified its technology to remove those pollutants as well. Removal of mercury is especially important in regions, such as on the East Coast, where there are more coal-fired energy plants, which emit mercury.

Its systems also have been shown to remove lead, zinc, copper, and cadmium, he says.

Meanwhile, another business segment that Blue Water hopes to tap is operating small wastewater treatment facilities, rather than just selling technology for them, Daugherty says. It does that for the Silverwood Theme Park, near Athol, Idaho, where it also oversaw development of the theme park's own wastewater treatment plant two years ago, he says.

"That was great experience for us," he says. "We hope it serves as a springboard."

Daugherty says Blue Water has done two other design-build projects since then, and is talking with the city of Plummer about a possible operational contract at Plummer's new wastewater facility.

Blue Water got its start using technology that it licenses from the University of Idaho, and still uses that technology, but also has broadened its capabilities with technology it has developed on its own. It also acquired some filtration technology from a Texas company, Applied Process Technology Inc., in 2006. In all, it now owns one patent of its own and has three other patents pending, Daugherty says.

Blue Water Technologies is privately owned by about 67 investors. He says that although the company hasn't made an annual profit yet, "Our revenue isn't chicken feed," and that it has seen some profitable months. He says the company has enough capital to get it through to its first profitable year, expected in 2011.

In the meantime, he says, expect Blue Water to pursue further acquisitions of technology used in wastewater treatment. Now with equipment used at both the front end and back end of the treatment process, it might look to add technology to its lineup that would be in the middle of the process.