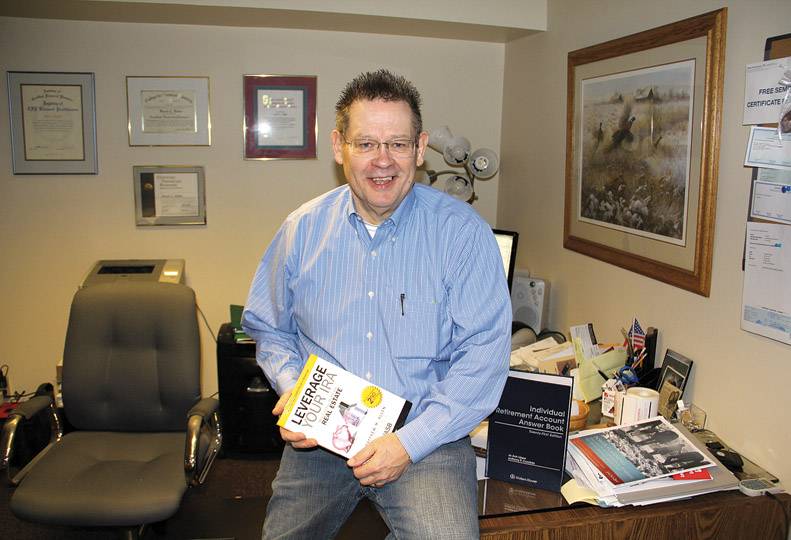 Using a Roth individual retirement account to invest in real estate is a little-known strategy that can provide interesting diversification and attractive benefits for certain investors looking to try something different, says David L. Baker, a longtime financial planner here.

“In the big scheme of things for retirement planning, there’s just no competition,” asserts Baker, who also has extensive experience in the real estate industry.

“When you have an asset in a Roth IRA that’s producing income, like stocks or bonds or mutual funds, when those assets go down, you sell them, but you deplete your principal. You’re going to run out of money at some point,” he says. “With (residential income) real estate, no matter the value of the real estate, you always have an income stream.”

A Roth IRA invested in such real estate can generate a lifetime retirement income stream of as much as 6 percent to 8 percent of asset value annually, the income would be income tax free for life, and would pass to heirs income tax free upon the investor’s death, Baker says.

Other advantages include that that the investor would never have to sell off the principal to realize the income, and the income stream and asset value would reflect the annual rate of inflation, and would grow over time, he says. Also, the income stream wouldn’t be affected by an economic downturn, as so many investments were during the Great Recession, he contends.

The investment strategy is outlined in a book Baker recommends, titled, “Leverage Your IRA: Maximize Your Profits With Real Estate,” written by Matthew W. Allen.

Allen is a speaker and author on the topics of self-directed IRAs and IRA nonrecourse loans and also is director of IRA lending at North American Savings Bank F.S.B., a publicly traded company on the Nasdaq exchange under the symbol NASB.

Based in Kansas City, Mo., NASB describes itself as a nationwide lender that provides $1 billion in mortgages each year for home purchases, mortgage refinance, and investment real estate. The bank says Allen has been instrumental in launching what it claims is the country’s first nonrecourse loan program for self-directed IRAs, and that he teaches investors how to compound their retirement money while diversifying into real estate.

Here’s an example, provided in Allen’s book, of how it works:

Sharon is interested in buying a duplex with her IRA funds. She found the desired property in her community, and the duplex is fully occupied. The asking price is $200,000, but she only has $125,000 in her IRA. She is about to finance 50 percent with an IRA nonrecourse loan specially designed for this type of transaction. Therefore, her IRA has funded directly 50 percent of the purchase price, and she has financed the remaining 50 percent with an IRA nonrecourse loan of $100,000.

Rental income from the residential duplex now flows directly back to Sharon’s IRA as a return on investment. Her IRA uses a portion of the income to pay off expenses related to the running and maintenance of the property, such as the monthly mortgage payments to the bank, insurance coverage, property taxes, upkeep, and repairs.

At the end of the year, Sharon’s IRA has a net income of $4,000, after all expenses are paid. If the real estate then appreciates at an average of 4 percent per year, then that gain is in addition to the rental income.

Baker says the return can be higher for Roth IRA account holders who finance less or none of their income real estate purchase.

Baker, who hosts a radio talk show on financial planning and property management every Tuesday at 5 p.m. on 1230 AM (KSBN) Business Talk Radio, says his interest in investing in real estate through a Roth IRA was triggered not by Allen’s book, but rather by Mark Whittaker, a Spokane CPA.

Baker used to have an office in the same building as Whittaker, who was his personal and business accountant and also is a trusted friend.

“He kept beating me with the idea that the Roth IRA is a tool you can’t compete with in terms of using it for real estate,” Baker says.

His research into the strategy, and watching the havoc the recession wreaked on other types of investments, convinced him that it was a strong potential option for certain investors. Since then, starting last year, he says he’s helped two clients invest through Roth IRAs in three duplexes.

“They were willing to invest in real estate if I could solve the 4T problem,” he says, meaning that they didn’t have to deal with tenants, toilets, trash, and turnover.

Now, he says, “They’re doing very well. They’re very happy (with their real estate investments). They can sell the asset at any time and totally get out of it, or they can change (property) managers or they can change (financial account) custodians. They just can’t keep their fingers in the pots and self-manage.”

One of the conditions of owning real estate through a Roth IRA is that “you can’t be self-dealing. You can’t manage it yourself,” Baker says.

Matthew Allen’s book and Baker say many Americans simply aren’t aware that Roth IRA account holders can use those accounts to acquire real estate for investment purposes, offering them the opportunity to take advantage of both capital appreciation and immediate cash flow into their IRA.

One of the creative tools adapted for use in investing Roth IRA funds in income real estate, Baker says, is the previously mentioned IRA nonrecourse loan. That type of financing specifically enables investors to use their tax-advantaged retirement funds to build a real estate investment portfolio.

As most investors are aware, a standard IRA enables an investor to save and invest money on a tax-deferred basis, which means they don’t pay taxes on the money contributed or its earnings until withdrawal, when presumably the investor could be in a lower tax bracket. A Roth IRA is different in that the investor makes contributions with money that is already taxed, so that upon withdrawal, the principal and the earnings can be withdrawn tax free.

One alternative to the typical IRA that’s set up and invested through banks, brokerage firms, mutual fund companies, and insurance companies and that Allen’s book says is becoming increasing popular is a “self-directed” IRA, or one through which the account holder can choose their own investments.

With a self-directed Roth IRA, account funds can be invested in such nontraditional assets as mortgages, raw land, commercial buildings, vacation rentals, and multifamily homes, to name a few, Allen’s book says. The account holder doesn’t need to cash out their IRA to do this type of investing. Instead, they make the investments within the self-directed IRA. Additionally, they’re able to roll current retirement funds from an existing IRA or 401(k) account into a self-directed Roth IRA to do this type of investing penalty-free, although the money is subject to ordinary income tax in the year it’s moved.

“They all have to be self-directed IRAs,” Baker says of the accounts used to invest in real estate.

He says he encourages Roth IRA account holders who are interested in investing in income real estate to confine their investments to single-family homes and duplexes because “you get better-quality tenants than you do in apartment complexes.”

He says, “What an investor is buying, in my mind, is tenants. The better the quality of the tenant, the better the asset performs.”

Roth IRAs invested in real estate provide a “built-in safeguard against inflation,” Baker contends. Unfortunately, in-vestment real estate held in an IRA can’t be used as a tax write-off, he says, “but at the other end, the tax-free benefits far exceed what you’re giving up for tax write-offs.”

One of the reasons why there isn’t more public awareness about this investing option, Baker believes, is that most financial planners have little involvement with fee-simple real estate, referring to the highest form of real estate ownership in which the owners is entitled to full enjoyment of the property.

“They’re not structured to get paid for it. They only promote what they get paid for,” he says.

Baker’s education and professional expertise encompass both business sectors. He is both a certified financial planner and has been a licensed managing real estate broker. He owns Spokane-based Baker & Associates LLC, a financial planning services company that he founded here in 1983 and that also offered property management services until he sold that portion of the business to Madison Real Estate & Property Management Inc., owned by Eric Bassett and Ron Dickerson, in June 2012.

As part of that transaction, he moved his Baker & Associates office from 9507 N. Division into part of Madison Real Estate’s office space at 910 N. Washington, on the periphery of downtown.

“I’m one of their real estate agents. I have my real estate license with them, and my financial planning practice is here under my own name.”

His credentials include involvement in various other real estate-related organizations, including serving as state director of the Washington Association of Realtors in 2007.