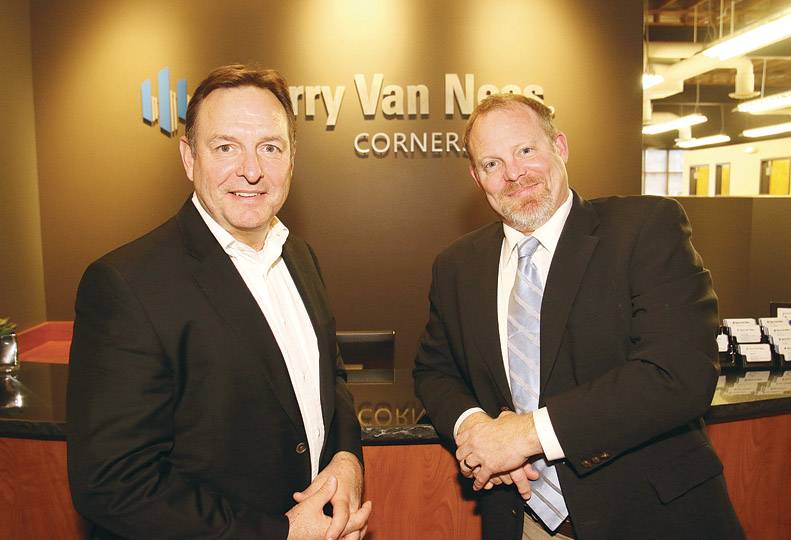 -—Mike McLean
Guy Byrd and Matt Byrd, cousins and principals of Sperry Van Ness|Cornerstone, say they expect to be able to expand now that the brokerage is affiliated with a national franchise.

“They found us,” Guy Byrd says. “We were content to be a boutique brokerage, operating and competing against larger brokerages.”

As a boutique brokerage, however, Cornerstone was on its own to set a new tack with every change in economic winds and real estate trends, Byrd says.

“We were reinventing the wheel every so often,” he says. “SVN takes on that task now, so we can pay more attention to business.”

Adds Matt Byrd, “They knocked on our door and got us thinking about how to take the next step.”

SVN brings with it a well-developed platform with networking tools and software, Byrd says.

“They’ve got it figured out,” he says. “They’ve got good training programs, making it easy to service clients.”

Guy Byrd says SVN|Cornerstone is the second all-commercial brokerage in Spokane to carry a national brand.

“We will be networking regionally and nationally,” he says. “We can cast larger nets when helping clients sell, buy, lease, and develop properties.”

Matt Byrd adds that such collaboration has helped close transactions since the SVN|Cornerstone franchise was announced.

“Already in the first couple of months, we’ve had regional offices contact us,” he says.

Byrd says the collaborative culture shared by SVN’s independently owned offices is a good fit for the brokerage here.

“We share 50 percent commission with cooperating brokers 100 percent of the time,” he says.

Other brokerages might try first to connect property sellers with investors that they know so they can work the commissions from both the seller’s and buyer’s side of the transaction, he says.

Byrd says, however that 65 percent of investors in the Spokane commercial real estate market are from outside of the Spokane area.

“You can know all of the commercial real estate investors in the area, but that’s only 35 percent,” he says, adding that a far-reaching network provides a competitive advantage.

For example, SVN|Cornerstone already has shared information with SVN franchises in Everett and Seattle to assist with transactions with clients from those markets, he says.

SVN|Cornerstone has 11 licensed agents and a support staff of three based here.

The Byrds acquired the building in 2008 and moved into it in 2010 after extensive renovations.

“We bought it as we were headed into the recession,” Matt Byrd says. “We had helped other clients develop similar properties, so it was a natural thing for us to do to prove we could walk the talk.”

The building is fully occupied with a diverse mix of five other tenants, including retailer Fleet Feet Sports, a Re/Max Inland Empire real estate office, and the Spokane office of the Washington state Board of Industrial Insurance Appeals.

Byrd says he expects to see significant improvement in transaction types and volumes in 2015 and 2016.

Except perhaps for the multifamily sector, commercial real estate hasn’t reached 2007 levels of activity locally or nationally, he says.

Guy Byrd says the next major commercial growth area likely will be along the Regal Street corridor on the upper South Hill, especially from 44th Avenue south to 57th Avenue.

“Now that Target is here, two other developments are in the planning stages,” he says.

The two other envisioned commercial centers could add a combined 175,000 square feet of mostly retail space.

Byrd says one potential development is envisioned on property known as the KXLY or Radio Park site. The site, which is on the west side of Regal, across from Regal Plaza, is being planned as a lifestyle center that would have up to 100,000 square feet of commercial development with residential components, similar to Kendall Yards, northwest of downtown, or Riverstone, in Coeur d’Alene, he says.

SVN|Cornerstone is more directly involved in early planning for a retail center tentatively called Commons on Regal, which would be located on 9 acres of land formerly occupied by South Regal Lumber at 5414 S. Regal.

Commons on Regal would have up to 75,000 square feet of commercial space, he says.

Marketing illustrations for the development show seven to 11 buildings, some of which would have multiple tenants in spaces ranging from 1,200 to 25,000 square feet.

“We’re dealing with several commercial interests that would like to enter the market,” Byrd says, although he declines to name them.

He says comparatively high socioeconomic demographics on the South Hill are attracting the attention of retailers.

Byrd adds that the success of a Trader Joe’s specialty grocery store, which opened in 2011 in the Lincoln Heights Shopping Center on the South Hill, demonstrates that certain new development on the South Regal corridor could attract consumers from far beyond the surrounding neighborhood. Cornerstone helped broker the Trader Joe’s lease.

“I think in the evolution of Regal, it’s going to become a destination-oriented corridor,” he says.

Matt and Guy Byrd founded the brokerage in 2004.

The cousins started working together in 1985 at Vern Byrd & Associates Inc. real estate brokerage, which was founded by Matt Byrd’s father.