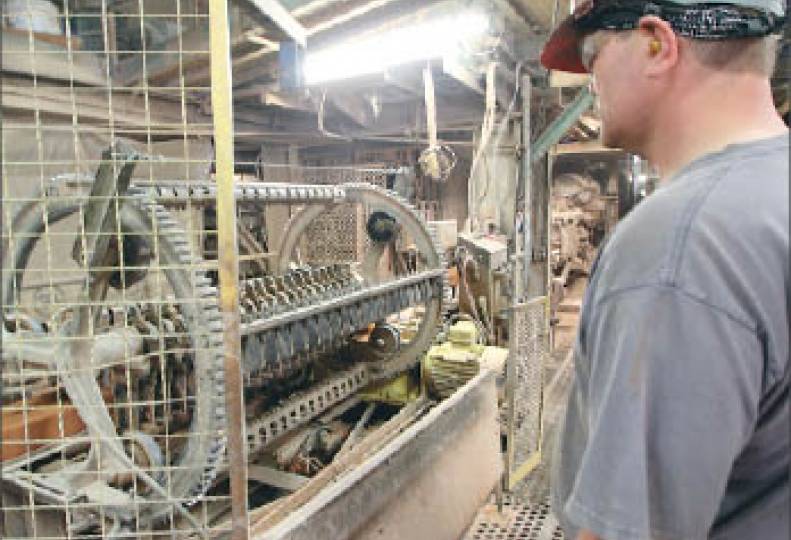 -—Staff photo by Treva Lind
Mutual Materials' plant in Mica, a few miles south of Spokane Valley, currently is producing about 22 million bricks a year. In busier years, it's made more than 40 million bricks.

The bricks that enhance the appearance and structural integrity of many highly visible buildings in the Spokane area have their origins as a high-temperature-fired clay product crafted only a few miles south of Spokane Valley.

Along state Route 27 in Mica, a brick plant owned by Bellevue-based Mutual Materials Co. has manufactured multiple sizes and colors of bricks for more than 100 years. Its brick became the featured material of choice for a number of Inland Northwest commercial buildings, schools, fire stations, and public facilities.

"Our brick really touches a lot of people's lives in Spokane," Mutual Materials plant manager Joe Taff says. "It was used in building all the new high schools—U-High, CV, Mead, Mount Spokane—River Park Square, Gonzaga, Whitworth. It's all, over the years, our stuff."

Taff says the Mica complex is one of two Northwest brick plants that Mutual Materials operates—the other is in Gresham, Ore.—with the one here currently producing about 22 million bricks a year that are shipped across the U.S. and worldwide.

That's down from more than 40 million bricks annually when the plant is operating at full capacity, as it was prior to the economic slowdown around 2009. The plant currently employs 45 full-time workers, which is down from about 60 employees five or six years ago.

Production is starting to pick up, Taff says, and Mutual Materials about a year ago landed a worldwide contract with Starbucks Corp. that's bringing it some added business. Starbucks is using a particular Mutual Materials brick product for interior wall veneer in its new outlets and in stores being renovated, Taff says. The product is thinner than standard bricks, glazed, and resembles textured tile, and Mutual Materials is producing it in four colors exclusive to Starbucks.

"It basically looks like tile, but it's brick," he says, adding that the surface of tile is typically smooth and uniform. In contrast, the Mutual Materials product has varying texture, and every brick is different, he says.

"Starbucks has embraced it as something unique to add dcor to their new stores and ones they are upgrading, and it's going to (Starbucks stores) all over the U.S. and all over the world. We've sold over half a million of these pieces so far," he says.

Each tile-like piece is about half an inch thick. Mutual Materials makes a separate retail line of them in other colors and sells them at a retail outlet it operates here, at 6721 E. Trent, which also carries the company's other brick and masonry products as well as mortar, concrete, and equipment, Taff says. The Mica plant doesn't handle any retail sales from its location. Mutual Materials has commercial and residential sales representatives based in the markets it serves, including the Spokane market, who sell the masonry products directly to contractors and building owners.

The plant also is known for making a broad spectrum of brick colors and sizes, Taff says.

"The colors and custom sizes, that is unique in the industry," he adds. "A lot of brick companies, especially back East, have automated, and produce maybe a couple of colors and a couple of sizes. We make at least 50 colors. Each color maybe has four different textures."

That capability is an advantage the plant has kept in modern times because it has production lines still staffed for custom work, he adds. Referring to the plant's 45 current employees, he says, "If we speed back up to full capacity, we'll need eight more people."

While parts of the facility date back over a century, Taff says the main plant that covers about five acres was built around 1965. In 1990, Mutual Materials bought the property with buildings and 400 acres from Interpace Corp., of Kirkland, Wash.

The plant recently completed some energy upgrades with assistance and energy incentives from Inland Power & Light Co., including lighting improvements and a 300-horsepower electric motor to run a large brick extruder. The upgrades are expected to save about $10,000 a year in electricity costs. He says the plant is about to start work on another project with Inland Power for another 200-horsepower motor that runs a slightly smaller extruder.

In recent years, the plant added robotic arms for one of its brick extrusion lines to lift standard-sized bricks. Overall, though, much of the basic equipment and brick-making process has remained the same for decades, Taff adds.

Taff says plant employees extract about 50 percent of the plant's clay soil material from the Mica property to make the bricks. Another 49 percent comes from the company's Worley, Idaho clay pit, he adds, with the remaining 1 percent gathered from other clay pits in the region.

The raw material is stored in a huge covered shed on site, and includes both a white clay and a red clay. For the manufacturing process, the material is ground to a powdery texture. Manganese or chromite is added to achieve custom colors, Taff says.

Mutual Materials mostly manufactures veneer brick products at Mica, but also makes structural load-bearing brick for building walls, Taff says. A majority of the brick products start with a grounded clay and water mixture that goes through an extruder to form the clay into a long rectangular shape that is then cut into the individual bricks.

The plant also manufactures what are called fire bricks used in fireplaces and woodstoves. The fire bricks separately are formed by being pressed using the plant's two large presses, Taff says, so they don't go through an extruder.

Taff says the plant's three extrusion lines include one with robotic arms to handle standard-sized bricks, another that is staffed by workers for custom shapes, and a third for flue bricks, which are round pieces used to line the flue of a chimney and made in different sizes.

"Not many plants make them anymore," Taff says of the flue bricks. "We ship all over the place. It's the same with fire bricks for fireplaces and woodstoves. We ship a load to Phoenix about every month. A lot are ordered for decoration."

After being formed, the bricks are dried inside one of five 200-feet-long dryers. A majority of the bricks then go through a 400 foot-long tunnel kiln, while the flue bricks are fired inside two of seven historic "beehive kilns," dome-shaped structures located on the property near the main plant.

Most of the activity, however, surrounds the tunnel kiln, where the temperature for hardening the brick gradually heats up to 2,100 degrees Fahrenheit in the middle, then slowly cools by the end.

To pass through the tunnel kiln, roughly 3,000 bricks are loaded on what is called a kiln car, which is a flat platform that sits low with steel, flanged wheels. They run end-to-end on what is basically a rail system through the tunnel and are pushed by a hydraulic ram just inside the entrance. Each kiln car is covered by high-temperature refractory brick that protects the kiln car frame, and the unfired brick is stacked on top of the refractory brick that serves as insulation, Taff says.

"It's a continuous process 365 days a year," he says. "We never turn it off. There is always someone here."

He adds, "It takes about five days from start to finish for the entire process."

For the distribution of bricks, a railroad spur runs along the side of the plant, Taff says, and most products are loaded onto rail cars.

"We ship a lot of stuff into the U.S. as far as New York City," he says. "Most of that stuff will go by rail, occasionally trucks. Most of the trucks are for Northwest deliveries. We also ship to Toronto, British Columbia, and Alberta."