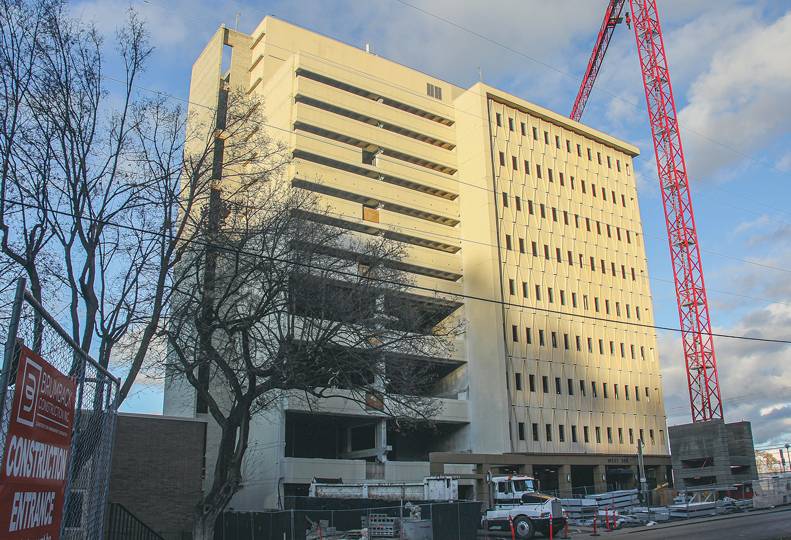 Donald G. Brumback, who goes by Gib, remembers when his son Nicholas Brumback was 10 years old and would ask, “Dad! Why don’t you build a skyscraper?”

Gib says he would respond, “Son, that’s just not where we’re at,” referring to the lack of need for such structures in Spokane decades ago.

“In downtown Spokane 20, 30, 40 years ago, outside of banks, rents didn’t justify building a skyscraper,” he explains. “But if you go downtown today, all at once you see cranes, which is new to Spokane. And that’s because of the growth and future prospects of what Spokane is going to become.”

Now, Nick is 40 years old and working on his first high-rise project, a renovation of the former QualMed Plaza building, located at 508 W. Sixth.

“It’s been a 30-year dream,” Nick says of the $16 million project. “For some reason, tall buildings with tower cranes always fascinated me. We’ve used tower cranes before, but this project is another animal. It’s finally our first high-rise.”

Nick and his father, respective co-presidents of Brumback Inc., bought the 55,000-square-foot building 1 1/2 years ago for $1.2 million with the intention of converting and renovating it into medical offices. Gib has over three decades of experience building medical and dental offices in addition to other commercial properties. He founded Brumback Inc. in 1979.

But when it all was said and done, it was Nick who called him and said: “Dad, I’ve been working on the numbers, and with everything going on in Spokane right now in terms of growth and success, I think we need to look at converting this parking garage and medical office building all into apartments.”

The QualMed building was built in 1964 as a nine-story medical office building with an attached 14-story elevated parking garage and an elevator running through the middle of the parking structure that was meant to move and organize the vehicles. But the elevator was never operational, and the parking operation failed.

“It was shuttered in 1967, and basically sat as an empty concrete shell for 50 years,” says Nick.

“He has a tremendous mind in understanding construction, and that comes from being on construction sites 20-30 years,” Gib says of his son. “We’ve had professionals, people we respect very much who are amazed at what we are doing. That’s nothing against anybody. It’s just a complicated project that needed someone who could think outside the box and have a vision, and Nick had it.”

Nick worked on sites while earning his MBA at Eastern Washington University. He went into banking immediately after graduating, working in derivatives and traditional investing for three years with two companies, but says he knew in the first week that he didn’t love it. When his dad called him and asked him if he wanted to help out with a project he was having trouble with, he jumped onto the opportunity and has been heavily involved with the family business ever since.

Over the past five years, he has helped restructure the company by assisting in the hiring of the current team and management and retuning the construction-filled systems and business-systems. Four years ago, he began to phase out single-family homebuilding, he says.

“The company’s long-term goals will focus on mid- and high-rise. That’s what we want, and we feel Spokane is there. Coeur d’Alene is there,” he says.

Before Nick took a leading role with Brumback, the company focused mostly on brokerage, commercial, and management services. Gib is 76 years old and still involved in the company’s operations.

He says it’s important to him for the family business to be involved in the community.

“As crazy as it sounds, probably the most important project I’ve been involved in over my career—and it was a volunteer situation—was when I headed up development of Plante’s Ferry Park Sports Complex,” he says.

As a parent with two sons, he came to realize the need for a sports complex in Spokane Valley. He met with the county parks department and began the project in 1995 with the help of several volunteers and companies within the community and completed the 75-acre sports complex in 2005.

“I literally had people from all over the country asking me, how did you do this? And it was done based on the tremendous community effort,” Gib says.

Gib now has grandkids who play soccer and other sports at Plante’s Ferry.

“That was 25 years ago,” Gib says. “Now, Brumback has become a major regional developer and my son, Nick, heads the organization up. He will become such a major contributor in the next 20 to 30 years in Spokane.”

The company currently has several projects in the works in addition to a two- to three-year backlog of work, says Gib.

Gross revenue is projected to be $5 million plus this year. From year to year, projects’ construction values range from $15 million to $40 million, he adds.

But the company’s current number one project is the QualMed building, says Nick. It will have 117 rental units, the majority of them one bedroom and studio apartments, as well as tenant amenities similar to those seen in big cities such as Seattle and New York.

The basement of QualMed will have a dog-grooming station and a gym. The 10th floor will have penthouse units, a lounge with a small bar, and a rooftop with tenant access. The first floor will have a coffee shop in addition to the existing hair salon and the Sixth Avenue Pharmacy.

Nick says Brumback first entered the apartment business 10 years ago, when the company developed Cedar Crossing, a 5-acre mix use of retail, commercial and apartments buildings on the former Tidyman’s supermarket site, near the northwest corner of Francis Avenue and Cedar Street, on Spokane’s North Side.

The $5.5 million, 36-unit apartment building was designed like “very traditional Spokane apartments” he says. They were spacious units, mostly with two bedrooms, some with three bedrooms, but not many one-bedroom units. The one-bedroom units were rented first, and the rest took a long time to be occupied, he says.

A couple of years later, his next apartment project was in the South Perry District. Half of the units for that project were one-bedroom units, and the other half were two-bedroom units.

He found a repeat of the Cedar Crossing situation—the one-bedroom apartments were immediately leased, and it took longer to find tenants for the larger units.

When he began designing the apartment building in Five Mile, he decided to simply make it one bedrooms and studios. Of the 26 units, 22 already have been leased.

“We know Spokane is not Portland, Seattle, or New York,” Nick says. “But that trend is there, even though it’s a smaller city.”

It’s not just Nick who has noticed the market shift. Other developers from Portland currently are building mid- and high-rises in downtown Spokane. The Boxcar apartment site for example is headed by Tom Cody, a Portland developer whose seven-story structure has 140 units of studio and one-bedroom apartments, much like the QualMed building.

“The big out-of-town developers are here, and that’s a sign. That tells you there is a shift in Spokane,” Nick says.