Changes part of push to eliminate fossil fuel use 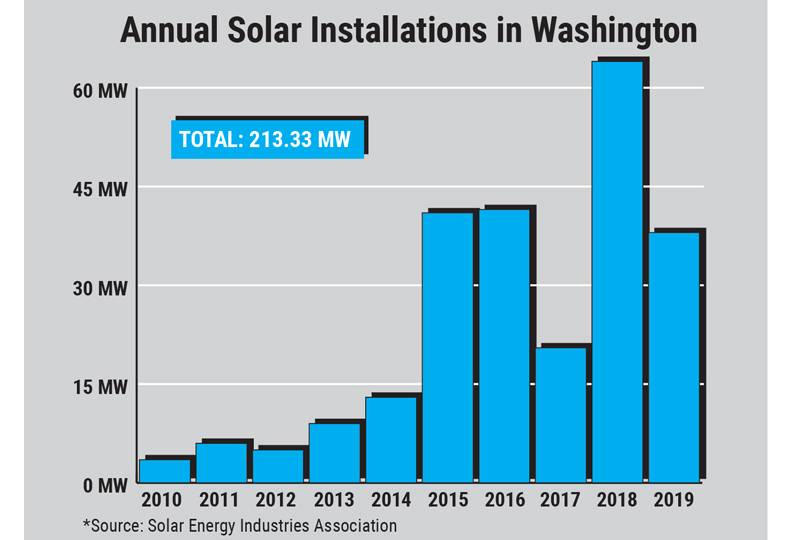 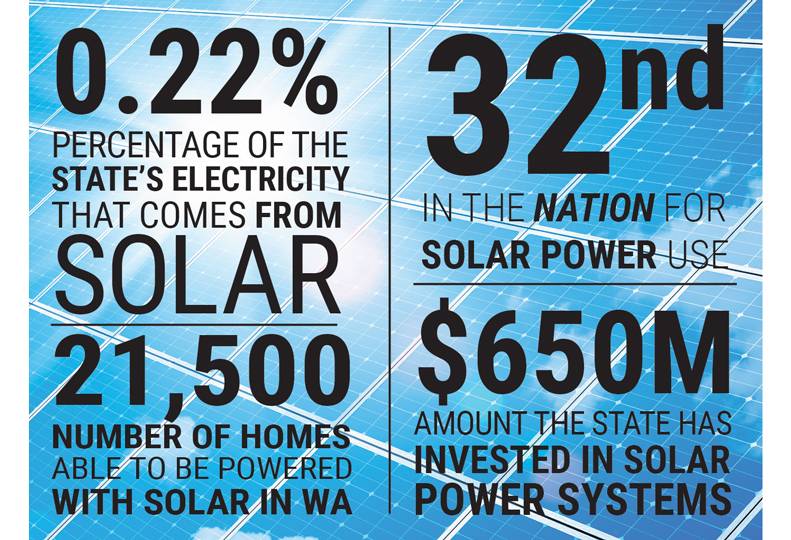 Washington state is now encouraging higher adoptions of solar energy systems in homebuilding as part of its drive to eliminate fossil fuel-generated electricity from the grid.

An energy credit in the building code refers to the amount of energy efficient measures implemented while building. Each measure, such as installing a gas furnace, water saving faucets, or energy efficient windows, is worth between 0.5 credit and three credits.

Only ductless, split-system heat pumps and an electric water heater that meets specific standards also allow for three energy credits, according to the 2018 building code, making solar power systems one of the easiest ways to earn energy credits.

Gavin Tenold, co-owner of Northwest Renewables LLC, a solar installation company, says, “We do expect that this will increase solar installations statewide on the part of residential construction. It lowers the homeowner’s operating costs and adds value to the property.”

The new codes were to go into effect July 1, but Gov. Jay Inslee delayed the implementation of the codes until Nov. 1 because of the coronavirus and concerns it would overburden construction projects.

Other benefits of solar power systems include an exemption from state sales tax and federal income tax credits of up to 26% of the builder’s system price, says David Camp, a board member of grassroots climate-action nonprofit 350 Spokane.

Camp further explains, if a builder pays $11,000 to install a system worth three energy credits and values the system at $15,000, the homebuyer could receive a federal income tax credit of $3,900.

On a broader scale, solar power systems are getting less expensive to install, according to a report by the International Renewable Energy Agency. The global-weighted average cost per kilowatt installed of utility-scale solar projects dropped below $1,000 in 2019, an 18% drop from 2018 and a 79% drop compared with 2009 costs.

The National Renewable Energy Laboratory defines utility-scale as a solar farm producing at least 5 megawatts, which is roughly enough to power 555 homes in Eastern Washington.

Overall, since 2010, the cost of solar energy has dropped 82%, according to the report. The drops were attributed to improved technology, supply chain competition, and the increased experience of system developers to make the technology more efficient.

Residential solar costs alone fell 47% to 80% in the last decade, depending on the region, according to the report.

Pricing is done on a case-by-case basis for existing construction, Tenold adds, but the company has established builder rate pricing for the installation of such power systems on new construction.

Northwest Renewables currently has 11 employees. Its annual revenue for 2019 was nearly $3 million, Tenold says, up from 2018. He adds that he expects to see another year of growth for the company this year, with dozens of projects currently in the pipeline.

Since opening in 2016, the company has installed systems capable of producing a total of 1.5 megawatts of solar power. That’s roughly enough energy to power 166 homes, says Joy Fryer, products and services manager for Avista’s renewables division.

The average solar power system lasts for 30 years with proper maintenance and monitoring, Tenold contends, and only the inverter would need to be replaced during that period, as it lasts between 12 and 15 years. Northwest Renewables offers a 25-year warranty on its solar panel systems, and contracts with clients to monitor the systems.

Homeowners who install solar power systems also see lower power bills, as utilities are required to credit them for any surplus power they distribute back to the grid.

Avista Utilities currently offers net metering benefits for systems under 100 kilowatts, according to its website.

Despite the push to increase solar power use, Washington is ranked 32nd in the nation for solar energy by the Solar Energy Industries Association.

According to the association, the state has enough solar installed to power just over 21,500 homes, and only about 0.22% of the state’s electricity comes from solar as of the fourth quarter of 2019.

The state has invested under $650 million in solar, the association states, well below California, which is ranked first in the nation and has invested $66 billion, with nearly 7.7 million homes powered by solar.

Tenold attributes the slow adoption of solar power systems in Washington to its residents’ long-time reliance on hydroelectric power produced in the Columbia River system.

“There’s a tremendous resource there,” he says. “It definitely has a future to play in the state’s clean energy future. The state’s Clean Energy Transformation Act is working to eliminate the use of fossil fuels for power production. It does not in any way talk about taking down the Columbia River Power Plants.”

CETA was signed into law in May 2019 and commits Washington state to an electricity supply free of greenhouse gas emissions by 2045. The Washington state Department of Commerce is working with stakeholders on rulemaking.

To encourage higher use of solar in new construction, Tenold says he would like to see the act include more utility involvement in customer-generated energy, which could lead to more sourcing of energy generated by customers as opposed to complete reliance on large power plants to energize the grid.

“I think the Clean Energy Transformation Act will encourage that kind of customer to utility interaction,” he contends. “It’s what’s called integrated resource processes, which utilities are required to do. Distributed generation hasn’t really been a part of that to date.”

Camp argues one of the barriers that widespread solar adoption has faced is the perception by builders that solar panels reduce curb appeal and salability, which recent studies have shown isn’t always the case.

For example, a Zillow study that analyzed homes sold between March 2018 and February 2019 shows homes with solar-energy systems sold for 4.1% more on average than comparable homes without solar power.

Studies also show that solar adds between $11,000 and $16,000 in resale value to the median American home price, which currently is $248,857. Spokane prices hover above the national median, at $280,000 year-to-date, according to the Spokane Association of Realtors.

Despite these gains, Bruce Gage, co-owner of Eco Depot Inc., a Spokane-based certified solar installation company, says via email that few builders in the Spokane area actively use solar, and he doesn’t foresee many builders adopting solar systems as a standard practice.

Longtime Spokane-area developer Greenstone Homes, which is based in Liberty Lake, provides prewiring for solar systems, a representative of the company says.

Gage adds that to his knowledge, only Passive House construction currently requires solar power systems, as the goal is to achieve a net zero home, meaning the home produces as much energy as it consumes. Sam Rodell Architects AIA, of Spokane, and Tenold are both certified in Passive House building techniques.

Passive House is a German design style taught by the Passive House Institute of the U.S. that builds airtight structures to maximize energy efficiency.

Only California has adopted laws requiring new homes and low-income apartments have rooftop solar panels installed. The law went into effect this year. Since, the California Energy Commission approved the Sacramento Municipal Utility District’s plan to build its own large-scale solar site that homeowners can tap into, which allows builders to forego the need to place solar panels on each new home.

The law does include a provision allowing remote solar sites for buildings that can’t support solar on site.