Building demand for aging in place 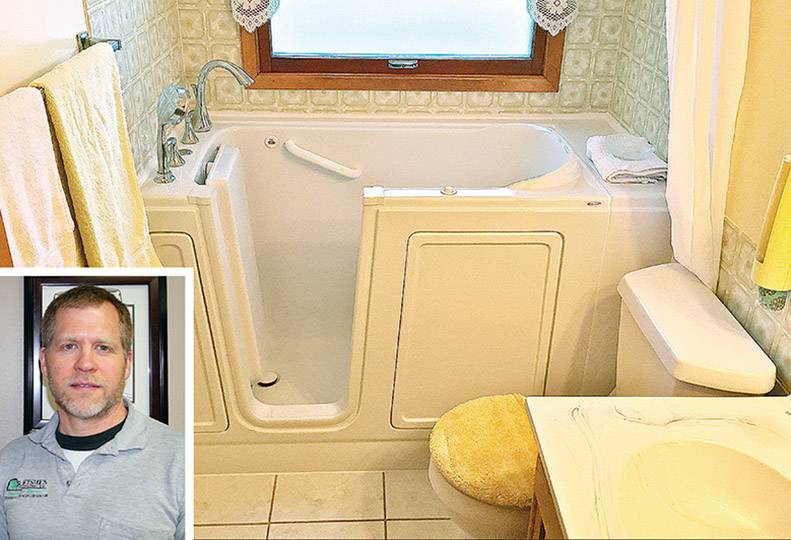 The term “age in place” is used to describe those homeowners who desire to safely, independently, and comfortably remain in their homes and communities as long as possible.

As the next wave of homeowners approaches retirement, looking to add age-related improvements to their homes, HomeAdvisor.com and the National Aging In Place Council have created a new online resource to help them do so. However, while HomeAdvisor’s data seems to indicate aging-in-place projects are on the rise both here and across the country, aging in place specialists here don’t necessarily agree.

A subsidiary of InterActive Corp., Golden, Colo.-based HomeAdvisor is a digital home services marketplace designed to provide homeowners with resources for home repair, maintenance, and improvement projects. The site pairs homeowners with pre-screened, local professionals in order to complete projects.

HomeAdvisor’s services are available nationwide, and it claims its network has received more than 8 million service requests in the last year.

While it wouldn’t disclose the total number of age related projects requested, HomeAdvisor says its data for Washington state shows a 49 percent increase in the number of age-related projects submitted between Jan. 28, 2015, and Jan. 28, 2016, compared with the prior 12-month period. Of those projects, the site’s data indicated hiring a professional to retrofit a home for a disability increased the most, up 108 percent from the previous year.

The website reports aging-related project requests also have risen in the Spokane area, up 150 percent for the same time period, compared to the previous year. Data again indicated hiring to retrofit a home for a disability as the service that had increased the most here.

Jim Breidenbach, president of Spokane-based Craftsman Construction Inc., is a certified aging-in-place specialist with the National Association of Home Builders’ Remodelors Council and a member of the Spokane Home Builders Association. Breidenbach says the Spokane area has a wide range of vendors, contractors, remodelers, and handyman services with experience in aging-in-place projects.

“The key is finding one who is CAP certified,” says Breidenbach. “The training involved shows a level of competency and knowledge base you can’t get elsewhere.”

Breidenbach, who has been certified since the early 1990s, says the NAHB program was designed to train remodeling contractors in the unique needs of the aging and was created with the help of the AARP, the big membership and interest group for people age 50 and over.

Rather than doing specific age-related projects, Breidenbach says it’s more common for his company to add elements of what is called universal design into remodeling projects for homes that clients intend to stay in long term.

“People don’t like the term aging, so as the years go by these kinds of designs are being called universal design,” explains Breidenbach. “These are things like additional lighting, or levered doorknobs, characteristics that can be used by all ages,” he says.

As to whether the number of age-related projects is growing, Breidenbach seems skeptical.

“I’d say it’s been a trend for the last 15 years or more,” he says. “I don’t think the number of aging in place projects has increased all that much. What I would say has changed is that building technology has gotten better with safer, more energy-efficient designs. It’s far superior to what it was 10 years ago.”

HomeAdvisor’s housing expert, Marianne Cusato, compiled the website’s 2015 Aging-in-Place report, which consisted largely of data obtained through an August survey of the 237 professionals within HomeAdvisor’s network. Of those who were surveyed, 186 reported completing aging-in-place tasks for homeowners.

“We shared that report’s findings at one of our HomeAdvisor insights forums,” says Cusato. “It was through a forum discussion that we evolved this partnership with the NAIPC, which in turn began the launch of a webpage of our shared resources.”

She adds, “The U.S. Census Bureau reports the number of residents 65 of older will grow to nearly 73 million by 2030, and this report shows that at least 90 percent of those homeowners are planning to age in place.”

The Aging-in-Place report included data on the ages of homeowners looking to complete aging-in-place projects and the most common types of projects requested, and revealed a need for more education and resources for both professionals and homeowners.

Cusato says that need was what led HomeAdvisor and the NAIPC to join forces.

“We realized that while those resources and solutions exist, there was a lack of connection between those providing services and the homeowners in need of those services,” she says.

While most professionals surveyed felt prepared to discuss the financial benefits available to homeowners to help them age in place, only 38 percent had marketing materials focused specifically on home improvement and modification options for aging in place.

According to the report, just 17 percent of professionals surveyed were familiar with Medicare or Medicaid benefits available for in-home services and care. Only 33 percent of professionals were familiar with the term universal design, the term for designing products, homes, and environments to meet the needs of people with disabilities, and just 25 percent were aware of the National Association of Home Builders Certified Aging-in-Place Specialist (CAPS).program.

“Part of this partnership with NAIPC is to inform people; the webpage is just beginning the process of forming a network to connect professionals and homeowners with these types of projects,” says Cusato.

The webpage, which launched in December, is called the aging-in-place resource center and is accessible through HomeAdvisor’s main webpage. Cusato describes it as a way for homeowners to streamline their search for aging-in-place project ideas and resources.

“This way, they don’t have to sift through all of the projects suggested by the site, and they also have access to other ideas geared toward those same improvement goals,” she says.

Like Breidenbach, Cusato acknowledges there is a certain stigma attached to the idea of aging-in-place projects.

“Many of these people don’t like to think of themselves as getting older, so we’re trying to focus on ideas that can increase quality of life for people of all ages with varying needs,” she says.

The report listed some of the most common aging-related projects as adding grab bars in the home, building disability ramps, installing a lift on stairs, and adding a personal alert system. The report found that when technology was installed in the home, more than half of homeowners requested home automation systems such as for security, lights, or thermostats.

While HomeAdvisor was unable to say how many homeowners the new webpage has assisted so far, its network lists more than 100,000 prescreened professionals. In October the site also paired with the Better Business Bureau to add additional security to its screening process for professionals, which checks both criminal and financial histories.

“There is a certain level of trust involved in allowing someone into your home to work,” says Cusato. “The background check system helps to provide that added layer of protection and assurance that homeowners are looking for.”

Last August, Carl Schauppner and his wife opened the business at 9608 E Montgomery in Spokane Valley. That shop currently has three employees.

“Our technicians are experienced and capable of doing a variety of projects,” says Schauppner. “We do all those little things on your to-do list you might not have the time, tools, or experience to do yourself.”

Schauppner is a retired naval officer who worked in the health care industry and as a government contractor prior to starting in the handyman business. He says he sees aging-in-place projects as benefiting homeowners while also easing the burden on the health care system.

“The objective is to make the homeowner safer and more comfortable in their own home, which is likely a better place for them than an unfamiliar facility,” says Schauppner.

Because his business is so new, Schauppner says it hasn’t worked on many aging-in-place projects yet, but the ones it has worked on usually have been simpler improvements.

“Most of what we do is related to accessibility, things like adding grab bars, replacing doorknobs or cabinet latches,” he says.  “These are changes people don’t often think about making as they age that just make things easier.”

HomeAdvisors and the NAIPC plan to continue their partnership through additional forums and eventually hope to include other organizations in a larger network.

“There are so many different dynamics that are redefining what people see as the perfect home for their later years,” says Cusato. “There is already a huge demand for these services, especially with the large number of people intending to age in place.”