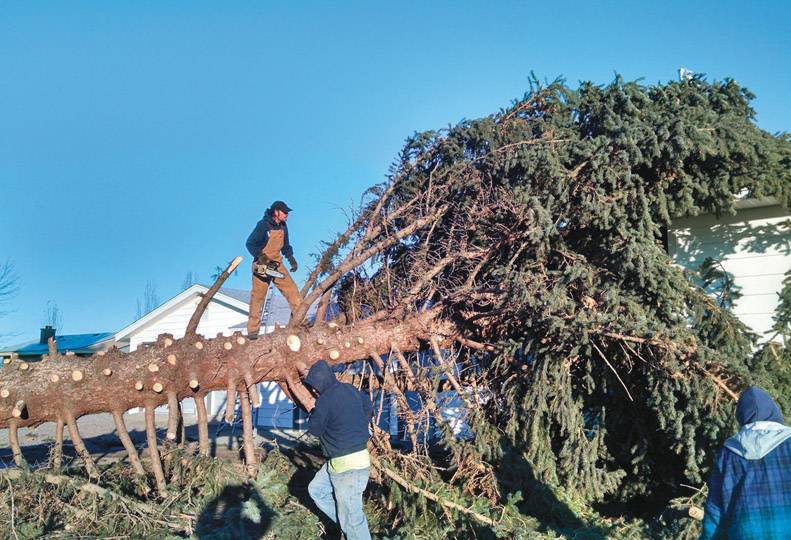 -—Photo courtesy of Tim Amen
Scot Stanford, tree and shrub foreman with Impeccable Landscapes, leads his crew of six in the cleanup of a fallen pine after Spokane’s record-breaking windstorm.

Following the Nov. 17 windstorm that rocked the Spokane area, many Inland Northwest businesses found themselves struggling in different ways. Those with power, and even some of those without, strived to stay open, both in an effort to help customers and to keep revenues flowing.

Many roofing-repair and tree-removal businesses had all of the business they could handle, while firewood, flashlight, and generator sales rose sharply, anecdotal and word-of-mouth reports indicate. Meanwhile, lodging establishments reportedly saw a jump in occupancy, and restaurants and grocery stores that were able to keep operating—some of them relying solely on generators for power—picked up added business because many of their competitors were closed.

The storm left nearly 50 percent of Avista electric customers—some 180,000—without power, and while power was restored to all affected customers as of Friday, Nov. 27, businesses have only just begun to calculate the costs of storm damage and power loss.

One business that remained open despite losing power, was the General Store, at 2424 N. Division.

Jon Evans, the store’s general manager, says the business lost power Tuesday afternoon and didn’t regain it until Sunday. The store chose to stay open to assist customers, guiding them to products using headlamps and flashlights.

“It’s hard to say how many people we helped, but it was a lot,” says Evans. “Naturally, some of the more popular items were things like propane cylinders, oil for kerosene lamps, lanterns, and flashlights.”

With the registers not working, customers—led individually by store employees to the products they needed—had to pay in cash, and transactions were recorded by hand. Evans says that has made it difficult to track everything and come up with figures as to how much business was lost due to the outage.

“I’m working on calculating that right now, but so far, I can tell you it doesn’t look good,” he says. “Most of our sales this time of year are in winter clothing, and we weren’t able to sell any of that this past week.”

While the store did make up some sales in light and heating sources, Evans says it would take a lot more to make up for the loss of not selling those clothing items.

“We made up some, but nowhere near what we need to make up for clothing being down,” he says. “It was good to be able to stay open for customers in an emergency, but definitely not good for sales.”

Grant Forsyth, chief economist for Spokane-based Avista Corp., says the company has yet to compile the cost of the storm’s impact, and it may be some time before those figures are available.

“As a company, we had to move so fast and focus so hard on recovery that we haven’t yet begun to calculate the financial impact,” says Forsyth. “In terms of cost, we reached out to so many, and there were so many activities involved, that those invoices are still coming in.”

For the broader business community, he says it’s hard to estimate costs, because most businesses are still working to assess their damages.

“Businesses are still getting a sense of the repair costs from the physical damage now, so it may be even longer before we’re able to figure out the cost in lost business,” says Forsyth. “It’s going to take some time.”

While impact from natural disasters is usually pretty negative, Forsyth feels this storm had particularly bad timing, which may complicate recovery efforts.

“The storm came on the heels of other natural disasters we’d dealt with over the summer like the wildfires, and it also hit in the middle of the retail season,” he says.  “It will be interesting to see how many people return to brick-and-mortar stores, or chose instead to complete their holiday shopping online.”

Forsyth says the one beneficial thing about the storm’s timing, was that it came along while the regional economy was doing well.

“We’ve seen that the stronger the economy at the time of the disaster, the quicker the community’s recovery. Spokane has had a strong regional economy the last few years, so that should be of some help,” he says.

While many businesses experienced a loss in sales, some other services have seen a demand not typical for this time of year.

Doug Tweedy, a Spokane-based regional labor economist with the Washington state Employment Security Department, says that while the impact of the windstorm on employment probably won’t be known for another couple of months, the flip side was that it created some jobs in the construction and removal industries.

“It’s similar to the bump in jobs we see when it snows,” says Tweedy. “Although we have yet to get those employment totals in, from our past experience with storms like this, we know the cleanup and repair industries usually see a slight increase in business.”

He adds, “All businesses were affected in some way of course. Whether it was employees without power, and in some cases transportation to get to work, or employers who lost power to their businesses. We just don’t have the numbers yet.”

“We haven’t really been able to take on any large projects, as people are still waiting to have their homes looked at by insurance adjusters,” he says. “Until an adjuster has been to look at it, it’s hard to tell someone we can start on repairs.”

Moody says a lot of other contractors haven’t been able to assist with these kinds of projects because of prior commitments.

“They’re already booked two to three weeks out with prior projects. Because most of my business comes from remodeling and flipping houses, I was able to pull my crew of eight to approach this kind of work pretty quickly,” he says.

Impeccable Landscapes Inc. has also had its hands full this week with post-windstorm cleanup efforts.

The company, which is co-owned by Linette Amen and her husband Tim, has been in business for 25 years. Amen says the windstorm turned what is traditionally a slower time of year into a busy one.

“Usually, it starts to taper off going into Thanksgiving, but now I would say our crews will be busy leading up to Christmas,” she says. “I would expect we’ll probably even have leftover work in the spring, things people might decide can wait for warmer weather.”

Jim Rambo is a certified arborist and sales manager for Impeccable and has been with the company for seven years. He says while the storm did increase business, it has been difficult to see its effects firsthand.

“It’s been good for business, but at the same time it’s really been devastating for so many people,” says Rambo. “The damage to homes and garages has been really substantial. It’s some of the worst I’ve seen.”

Matt Jensen, corporate director of sales and marketing for the Davenport Hotel Collection, says its four downtown hotels didn’t lose power, and all 1,376 rooms were booked for an unexpectedly busy five days.

“We tried to keep rates at a reasonable minimum enough to cover our costs, and we maintained a certain flexibility with check-out times depending on when power was restored to certain areas,” he says.

The company also allowed for pets in some rooms during the crisis, something it doesn’t typically do, so families could still care for animals.

Jensen says the influx of business came at a good time, as the hotel had enough rooms available. “This time of year the conventions are winding down, and it’s usually a breather before the holiday traffic starts.”

While the hotels might have gained some business, he says it definitely wasn’t easy, as most Davenport employees were affected by the storm, too.

“Something a lot of folks forget is that all our staff is local, so many of them were struggling with loss of power at home, and still coming in to work, trying their utmost to accommodate guest needs,” says Jensen.

In addition to locals needing rooms, the Davenport also housed some 200 visiting workers brought in from Seattle to assist Avista utilities in restoring power.

According to a recent Avista press release, at the height of power restoration efforts, a total of 132 Avista, mutual aid, and contract crews worked 16-hour rotating shifts. The workforce made up more than five times the typical workforce in Avista’s operations, consisting of at least 700 individuals, most of them skilled line crew members. Restoration of power to all affected Avista customers took 10 days to complete.