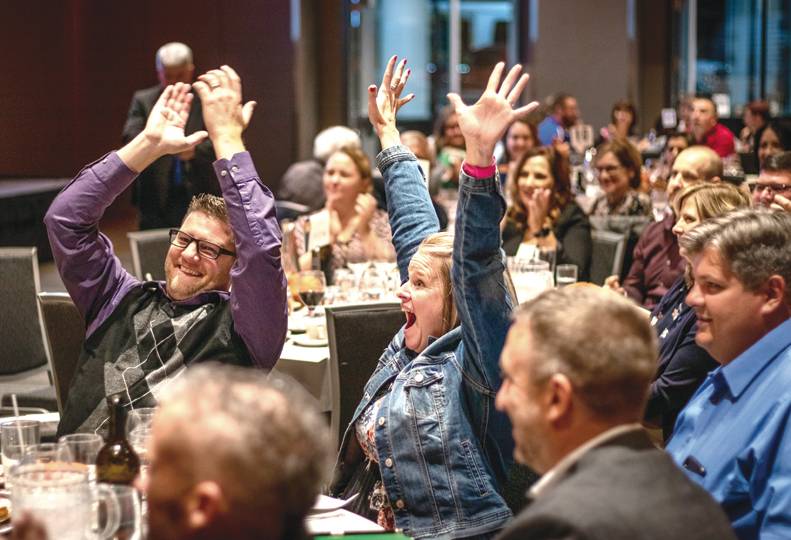 -—CANCER CAN’T
Cancer Can’t supporters celebrate at the orginization’s annual fundraiser, which was held in September.

“When you really look at the finances of patients who go through a cancer diagnosis, it is sometimes extremely difficult for the families,” says Jonathan’s wife Becky Van Keulen, adding that many people burn through their entire life savings while getting treatment.

To help others with cancer here, the couple founded Cancer Can’t, a nonprofit that provides financial assistance, advocacy, and other resources for adult cancer patients in the Spokane area, says Van Keulen.

Jonathan passed away in 2016, but the couple’s nonprofit has grown, both in its scope of assistance and fiscally, she says.

From there, the nonprofit has branched into other projects and ways to help patients. For instance, Cancer Can’t partners with Catholic Charities of Spokane to offer rides to and from doctors and hospital visits, says Van Keulen.

Cancer Can’t also is working with Providence Health Care to help cancer patients who need to visit the emergency room, she says. In May, Holy Family hospital launched a program in which patients who visit the emergency room are sent to a separate room and triaged by an oncology nurse. Van Keulen says the program isn’t fully operational yet and is still a work in progress.

“If you have a fever, and you’re going through treatment, you need to go to the emergency room,” says Van Keulen. “You also have cancer patients dealing with extreme pain, nausea … so there’s a ton of reason that cancer patients land themselves in the ER or need some sort of urgent care.”

By directing patients away from the main emergency room space, they are less exposed to illnesses that other people might be carrying. Cancer patients have suppressed immune systems, so something like a common cold could make them severely ill, she says. By working with an oncology nurse, patients are triaged by someone familiar with cancer who can determine how to help them better and more quickly based on their symptoms.

In a statement provided to the Journal via email, Kim Ward, Providence Health Care’s director of cancer services says, “Providence Health Care is excited to continue working alongside Cancer Can’t to improve the patient experience for people with cancer. We have a shared vision to efficiently assess, diagnose and treat these vulnerable patients, and are looking forward to further developing and implementing the oncology triage project. Cancer Can’t has been a champion for improving care for all area oncology patients.”

Of all Cancer Can’t projects, however, Van Keulen is particularly proud of both the organization’s successful efforts to pass state legislation in 2017 that enables people to donate unused medicine to pharmacies and the subsequent formation of Charitable Pharmacy Group.

Through Charitable Pharmacy Group, people can donate unopened medication in its original packaging to Cheney Owl Pharmacy Inc., where Goyke is a pharmacist, or any of Owl Pharmacy’s four other stores located in the Lidgerwood neighborhood on Spokane’s North Side, Medical Lake, Fairfield, and Grand Coulee.

People who need those medications can pick them up at Owl Pharmacy’s Cheney store, she says.

Medications shared through that program are always free, and people can pick up a donated medication after its been prescribed, she says.

“A lot of times, when people get put on these oncology meds, there is a process that they have to go through to get approved for them,” says Goyke. “We can step in and give them the medication that will keep them covered during that authorization process.”

In order to donate a medication, donors fill out a form that states the medication had been stored properly and accepted for donation by a pharmacist, says Goyke. The medicine sharing program doesn’t accept controlled substances or expired medication.

“Usually, when we get a donation, it’s because someone has died,” says Goyke. “We’ve gotten so many notes on those donation forms (saying that donating the medicine) makes the family feel better. Their loved one can’t use them anymore, but maybe someone else’s can, and maybe this drug will make the difference for them.”

Although most donations are cancer-related drugs, the program also accepts other medications, such as unopened inhalers or insulin, says Goyke.

So far this year, Charitable Pharmacy Group has distributed roughly $300,000 worth of medications to about 50 Spokane-area residents and currently has inventory valued at about $500,000, she estimates.

Cancer Can’t, which has two part-time employees, has increased its operating budget over the years, she says. Van Keulen says Cancer Can’t anticipated revenue in the current budget is $238,000, up from $226,000 in the 2018 budget.

She says the nonprofit awards up to $6,000 per quarter through its grant program. Such awards have helped patients cover mortgage payments, utility bills, and child care costs, among other expenses.

“We never pay patients out directly,” Van Keulen says. “We pay on bills or other things like that.”

The nonprofit has even provided a Starbucks gift card before, she says.

“When you have cancer, and there’s nothing you can eat because you’re going through radiation and your throat hurts so bad and you can only eat liquids, and the only thing that sounds good to you is a Starbucks Frappuccino … here’s $50, because we get it,” she says.

Looking forward, Van Keulen would like Cancer Can’t to continue expanding. In the future, Cancer Can’t likely will be able to help more people as well, especially as the Charitable Pharmacy Group’s medicine swapping program continues to grow, she says.

“We’re looking for the next great idea that really affects cancer patients’ lives for the better,” she says.