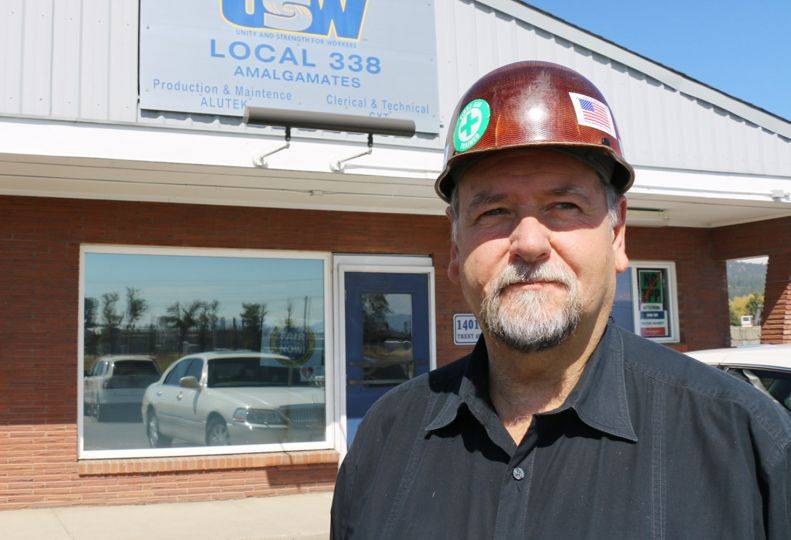 -—LeAnn Bjerken
Dan Wilson, president of United Steelworkers Local 338, contends the carbon-tax initiative would be detrimental to the 1,100 workers who the local represents, as well as to low-income families. 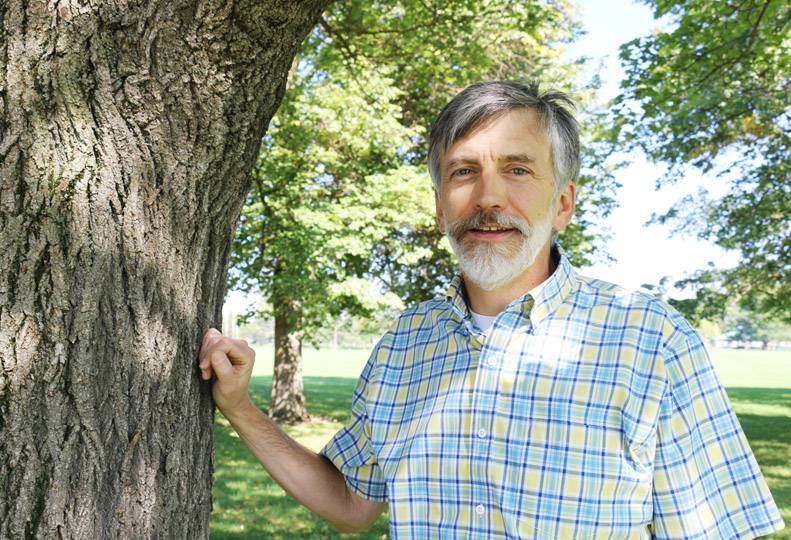 -LeAnn Bjerken
John Covert, a hydrogeologist with the Washington state Department of Ecology, supports the initiative.

Spokane-area manufacturers and utilities contend that Initiative 732, which would create a tax on carbon emitted statewide, will hurt both businesses and residents, while proponents say it will reduce carbon emissions and benefit low-income families.

The measure, which will be included on the November general election ballot, would create a new carbon-emission tax that would apply to the sale or use of certain fossil fuels and electricity generated from fossil fuels, starting at $15 per metric ton of carbon dioxide in 2017 and increasing gradually to $100 per metric ton, with more gradual phase-in for some users.

It also would reduce the state sales tax rate, reduce the business-and-occupation tax rate on manufacturing, and fund a partial sales tax exemption for low-income families.

Should the initiative pass, residents could expect to pay 25 cents more per gallon for gasoline, as well as a quarter of a cent more per kilowatt-hour of energy produced from fossil fuels.

The initiative also would lower the state business-and-occupation tax rate for manufacturing, from the current rate of 0.484 percent to 0.001 percent for most manufacturers.

Longtime Spokane resident John Covert, a hydrogeologist who has worked with the Washington state Department of Ecology for 28 years, says he’s supports the initiative.

“The idea behind I-732 is to put pressure on the energy industry to move toward clean fuels and away from fossil fuels,” he says.  “The best way to do that is by putting a tax on things like pollution, which drives them to pursue cleaner alternatives.”

The campaign supporting the initiative is led by Carbon Washington, a group started by Seattle resident and environmental economist Yoram Bauman.

Kyle Murphy, co-director of the campaign, says the group sees I-732 as a bipartisan solution that will cut pollution, reduce other taxes, and create jobs.

“Our primary goal with this initiative is to promote clean energy in Washington, reducing emissions and in turn reducing climate change and protecting the environment for the next generation,” Murphy says. “Our secondary goal is to do so in a way that’s bipartisan, and keeps taxes low and fair, decreasing the burden on families and businesses.”

Kyle England, Kaiser Aluminum Corp.’s senior manager of human resources and external affairs, says the aluminum manufacturer opposes the initiative, because it doesn’t consider certain factors that will cause issues for manufacturers.

“You need a set amount of energy for certain manufacturing processes, and this is energy that can’t be created carbon free,” England says. “The initiative doesn’t consider the need for these processes in the production of certain materials. It simply places a tax on all carbon use.”

Kaiser Aluminum operates the Trentwood plant in Spokane Valley, which the company says is the largest flat-rolled aluminum mill in the western U.S. and employs more than 900 people.

Along with the initiative’s other perceived flaws, England says it doesn’t recognize a manufacturer’s previous efforts in the area of carbon reductions.

“You could be manufacturing your product in the cleanest way possible, emitting the least carbon possible, but you would still pay a fee,” he says.

England says the initiative also doesn’t consider a way to level the playing field with competitors in other regions or globally who don’t face the same restrictions.

“There is the issue of leakage. Our production processes actually produce significantly less emissions than our global competitors,” he says. “They can produce more product than us, and emit more greenhouse gases, because they’re not concerned with environmental impact. Leakage of business to competitors will result in reduction of our capacity here, as well as job loss.”

Murphy says he disagrees with the argument that the initiative would place an unfair burden on manufacturers and cause job losses.

“It’s a fairness issue. If a business or household creates excessive pollution, they shouldn’t get to do that for free,” he says. “At the same time, manufacturers also will be getting a tax rebate through the elimination of the B&O tax, so they’ll actually be better off.”

England contends, though, that the B&O tax break isn’t enough.

“The way it’s been framed is that the reduction of B&O would take care of the offset, but for manufacturers like Kaiser, that’s only a small percentage of the tax burden,” he says. “This initiative would end up costing us millions annually because our competitors don’t share in it.”

Isaac Kastama, the Seattle-based director of government affairs for the Washington Business Alliance, says that organization hasn’t taken an official position on I-732, but it intends to keep working with both sides to make sure the initiative represents both business and environmental interests.

“I can say that this initiative is not neutral when it comes to entities who consume a lot of energy,” says Kastama. “If you’re a larger consumer of energy, this initiative would cost you in buying fossil fuels. Whether or not that is balanced out by the reduction in taxes would depend on the specific business, as each has different needs when it comes to production of their product.”

Carbon Washington points to three main studies providing research in support of the initiative: one by Sightline Institute, another study by REMI, Regional Economic Models Inc., and a working paper published by Washington State University’s school of economic science.

“The Sightline Institute’s study in particular provides an in-depth analysis that shows the carbon tax to be revenue neutral,” Murphy says.

The Sightline study states that I-732 is revenue neutral to the best of anyone’s ability to forecast it. The study maintains that a forecast would depend on the volume of statewide carbon emissions and statewide sales tax revenue that could change by hundreds of millions of dollars a year, depending on how accurate the forecast’s assumptions turn out to be.

While Carbon Washington maintains the tax swap is revenue neutral, meaning it wouldn’t increase or decrease state revenue, those opposing the initiative maintain it would hurt manufacturers and low-income families.

“We represent over 1,100 workers, many of whom work in the private sector of manufacturing industries here in Washington,” says Wilson. “From a labor standpoint, this initiative isn’t revenue neutral. While it does cut B&O and sales tax, it would increase fuel at the gas pump, and the cost of natural gas and electricity. This would directly affect the lower-income families in the state, the people who can least afford it.”

Wilson points to the state’s most recent fiscal impact statement for I-732, published in early August, which shows the initiative would cause an almost $800 million shortfall in the state budget.

“It will transfer carbon pollution and jobs to other regions, because manufacturers here can’t compete, and that will have a ripple effect on the economy,” he asserts. “There’s no guarantee it will reduce carbon emissions, and it would lay another regulation on top of what the Department of Ecology is already planning.”

He’s referring to the state’s clean air rule, a set of emission standards that would cap and reduce greenhouse-gas emissions from significant in-state stationary sources as well as petroleum-product producers, importers, and distributors and natural gas distributors operating within Washington.

Initially, businesses and organizations that are responsible for 100,000 metric tons of greenhouse gas emissions each year will be regulated by this rule. It is expected to go into effect next year.

England argues that I-732 would complicate the progress Kaiser and other businesses have been making on the clean air rule, and he points out that funds from the new tax would go back into the state’s general fund, rather than toward carbon reduction or the advancement of green technology.

“We would prefer to keep working on the clean air rule,” he says. “It hasn’t been released yet, but adding an additional initiative like this will only serve to make it harder for manufacturers to operate in Washington."

Opponents of the initiative say that as of 2013, Washington already had reduced emissions between 18 percent and 20 percent since 1990, a fact noted by the U.S. Environmental Protection Agency’s State Inventory.

“In that time, our economy increased and so did population, all while driving down our emissions,” says Wilson. “We’ve got a lot of more good things to talk about than bad, with more hydro, solar, and wind power than most states.”

But I-732 proponents like Murphy say these efforts at carbon reduction aren’t enough.

“The idea that we’ve reduced emissions since 1990 isn’t what I would call a very big benchmark of success,” he says. “Sure, it’s great we’d reduced a bit, but we need to be looking at much more.”

John Rothlin, Seattle-based manager of state government relations for Spokane-based Avista Corp., says the company doesn’t support the carbon tax, believing it will have an adverse impact on the utility’s customers for little or no discernable benefit.

“It would be better to regulate emissions at a national level, so there are no disparities between states,” he says. “Energy-intensive businesses will find it more attractive to relocate out of state rather than pay higher taxes.”

Avista estimates show the annual impact of the initiative the first year would be $116 for an electricity and natural gas residential customer, with that added cost increasing to $193 during the second year.

The company estimates that for 2018, the annual cost to the utility would be $80 million, increasing 5.5 percent annually thereafter.

Despite the arguments against it, Murphy says the Carbon Washington campaign is confident the initiative will pass, given its level of support so far.

“I-732 qualified for the ballot because large numbers of people are tired of seeing too little happen to fight climate change,” he says. “We are convinced the same grassroots energy that brought I-732 to the voters will carry it over the finish line.”