Attire errs on simpler side; industry shows signs of life 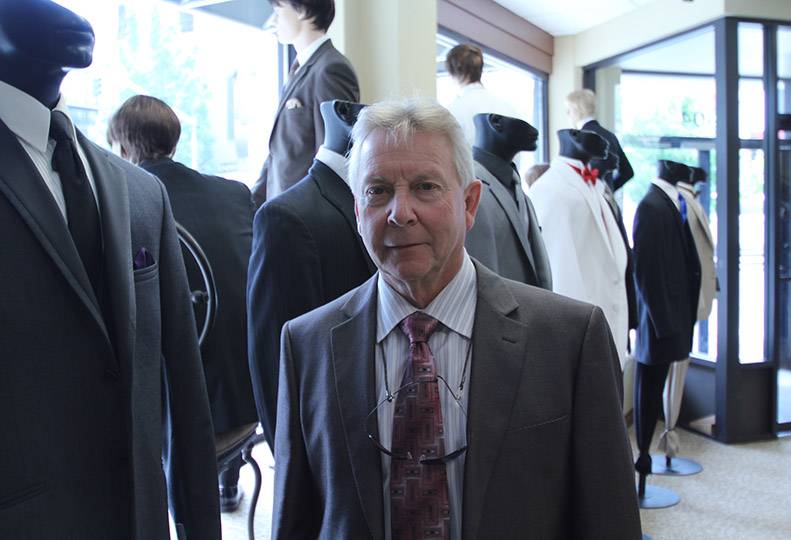 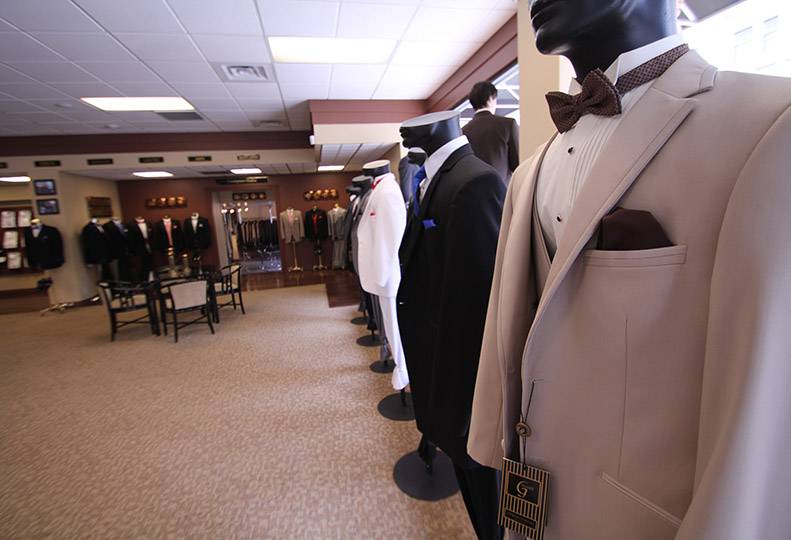 The formal-wear industry took a hit from the recession as more consumers tightened their purse strings, a decline that experts here say hasn't been helped by a trend in recent years of weddings and social events opting for more casual attire.

Although some tuxedo and formal-wear stores here continue to see sales decline or make no upward movement, others say black-tie events might make a comeback soon.

"2012 was a better year," says Gene Slatter, owner of Tuxedo Gallery about sales. "I think we're finally seeing a turn."

"The consumer is much more educated when it comes to the fashion trends," John Mosby says.

Mosby is the longtime owner of Mr. Tux Inc., a group of stores here that specialize in men's formal wear. Mosby bought back the business from Tim and Laura Rabey about 3 1/2 years ago, he says. Former employee Tim Rabey had purchased the business from Mosby in 2007. Currently there are four Mr. Tux stores in the Inland Northwest, with one store located downtown at 904 W. First and another located 13216 E. Sprague.

Mosby says although he's seeing the same number of weddings, the number of tuxedo rentals per wedding has decreased slightly since the recession, although recently that has started to rebound.

"It has cycles that probably coincide with the economy's ups and downs," says Mosby.

The busy time for most formal wear stores includes the prom and wedding seasons, which typically runs from early spring through September.

Slatter says he too has seen a decrease in tux rentals. Instead of renting around seven tuxedos per wedding as typically occurred until five or six years ago, he says, the number has dropped in recent years to one or two tux rentals per wedding.

There are six Tuxedo Gallery stores in the Inland Northwest, including shops in downtown Spokane, at 304 W. Second; in Spokane Valley, at 15319 E. Indiana; and at NorthTown Mall.

He says although he's renting out fewer tuxes, which typically range between $99 and $150 to rent at his stores, customers on average are choosing to rent a more expensive tux.

"(Customers) come in and rent from us the pants, vest, tie, shirt-kind of thing, so they're not going with the jacket," Slatter says.

"The girls are not spending as much money as they used to, but other than that, the bridal industry doesn't really change a lot because of the need that's out there," Taylor says.

She says if women are choosing to cut expenses within their bridal party, it usually comes at the cost of bridesmaids' dresses.

"When it comes to bridal, they want to be beautiful," Taylor says. "They'll select a dress that fits their needs, and they may cut back on one thing, but they'll still have a dream dress."

The price range for wedding gowns at her store has dropped to between $500 and $1,000, down from $1,200 to $1,500 prior to the recession. Even with the lower cost of gowns on average, she says Mossuto's sales have remained average, something she attributes to adding several high-end brands such as David Tutera and Alfred Angelo Bridal.

"My prom took a beating, but my bridal didn't," Taylor says.

Mossuto's saw fewer girls buying prom dresses this year compared with last, she says. With many prom dresses in the store starting at around $400, Taylor says she believes more chose to shop online or to exchange dresses with classmates.

"I probably had more girls ask me for dresses under $200 than I ever have," she says.

Don Clifton, co-owner of Celestial Selections Inc., in Spokane Valley, says sales for his store are about the same compared with last year, adding that he's sold more dresses, although at lower prices, than he did in 2012.

"The season isn't over yet, because we still have two or three more proms left before the end of May," Clifton says.

In addition, dress styles for proms have shifted away from ball gowns toward short dresses and high-low dresses, which are asymmetrical dresses that are shorter in the front and longer in the back, he says.

Mosby says the fashion trend in the industry over the last decade for men has been on accessories, with a dark tux complemented by colorful ties or vests.

Seven or eight years ago, men's formal wear typically was all black, but Slatter says now the trend has shifted to include dark and light gray.

"Twenty years ago, we never saw a parent—10 percent, maybe," he says, adding that today it's closer to 35 percent.

Mosby says with a shift in fashion trends compounded by the economy, he's seeing more clients choose to buy a suit over renting a tux in recent years.

He says of his customers, about 20 percent are choosing to buy a suit over renting a tux that would cost about the same. Mosby says Mr. Tux has added suit studios or sections devoted to suit sales at three of its stores in the last year, with the first installation at its downtown location in December as a way to grow the business with the decline of tux rentals. The suit section in the downtown Mr. Tux store is marketed as Milano's Suit Studio.

"The suit studios provide a more stabilized year-round business," Mosby says, adding tux rentals have become more of a six-month business due to a more condensed wedding and prom season.

"Eighty-two percent of our volume is rental, but that's going to change with the implementation of suit studios," Mosby says.

Slatter, who also has noticed an increased interest in suits, added a wider range of available suit colors, such as tan and brown, in addition to more traditional shades of grey and black.

He says shabby chic weddings have become popular, which is a rustic-style wedding that generally is more casual than a more traditional wedding.

I think that's kind of a trendy thing that'll change," Slatter says. "Fashion goes in cycles, and I think we'll see that kind of turn around over the next few years."

Slatter says Tuxedo Gallery has offered suit rentals for about five years. Of its rentals, suits make up between 15 and 20 percent, and the rest are tuxes, he says.

"For us, I don't care what we rent as long as we're renting it," Slatter says.

Employment at both men's and women's formal wear stores is dependent on seasonality, local merchants say. Mosby says his Mr. Tux stores employ 26 people currently, but that can drop during the off-season to around 14. Clifton says Celestial Selections currently has six employees, but says that number can double during the height of prom season. Slatter says Tuxedo Gallery currently has a total of 25 employees working at its stores.

Fluctuations and uncertainty in the formal-wear industry hasn't stopped some other businesses here from enlarging their space or boosting their inventory. Marcella's Bridal Inc., a wedding dress retailer and maker located at 304 W. Second in downtown Spokane's SoDo Business District, expanded into adjoining building space about 1 1/2 years ago.

Marcella Davis, who co-owns the business with husband Craig Davis, couldn't be reached immediately for this story. According to a previous Journal article, Marcella's displays about 500 wedding dresses now in the 7,500-square-foot space. Marcella Davis has been designing wedding gowns for 25-plus years.