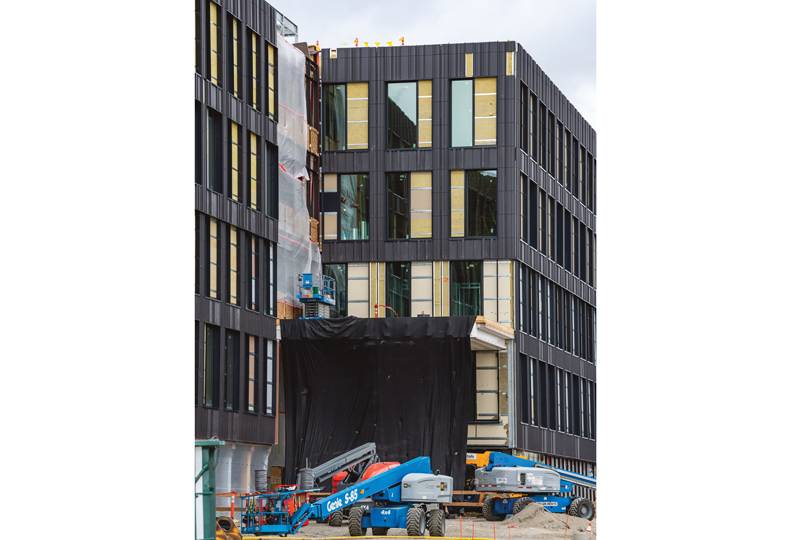 -Erick Doxey
The $40 million Catalyst Building is scheduled to be completed in August, with tenants moving in later that month and in September.

Two new office buildings with a combined cost of $57 million have taken shape next to the University District Pedestrian Bridge, on the southern edge of the U District.

The five-story, 159,000-square-foot Catalyst Building, at 601 E. Riverside, is on schedule to be completed in August, with tenants expected to move in later that month and in September, says Stephanie Pitts, communications director for McKinstry Co.

McKinstry is the Seattle-based company that is serving as the design-build contractor for mechanical, electrical, plumbing, data, and fire-protection systems at Catalyst. The company also plans to move its Spokane operations into a portion of the building.

Katerra Inc., the Menlo Park, California-based mass-timber products manufacturer, is serving as the contractor on the $40 million Catalyst building project, and Michael Green Architecture, a Vancouver, British Columbia, firm that Katerra owns, is the lead designer.

The Catalyst building’s neighbor to the southeast, formerly known as the Hub Building, now is being called the Scott Morris Center for Energy Innovation. The shell of that four-story, 40,000-square-foot structure was completed in February, and tenant improvements are underway, Pitts says.

Bouten Construction Co., of Spokane, is the general contractor on the $17 million Morris Center project, and Bernardo|Wills Architects PC, also of Spokane, designed it.

At Catalyst, Eastern Washington University is expected to be the largest tenant initially. It has agreed to lease 60,000 square feet of space in the building and plans to move its computer science, electrical engineering, and visual communication design departments there once it’s finished.

The Morris Center, named for Avista Corp.’s chairman, will be home to a central energy plant that will serve both buildings. Avista Utilities has agreed to take 10,000 square feet in that building and plans to move operations into that space by the end of July. Also, a joint venture between Avista Development and McKinstry that’s being called the Eco District will take space on the upper floors of that building.

Katerra had been announced as a tenant in the Morris Center, but it no longer intends to take space there.