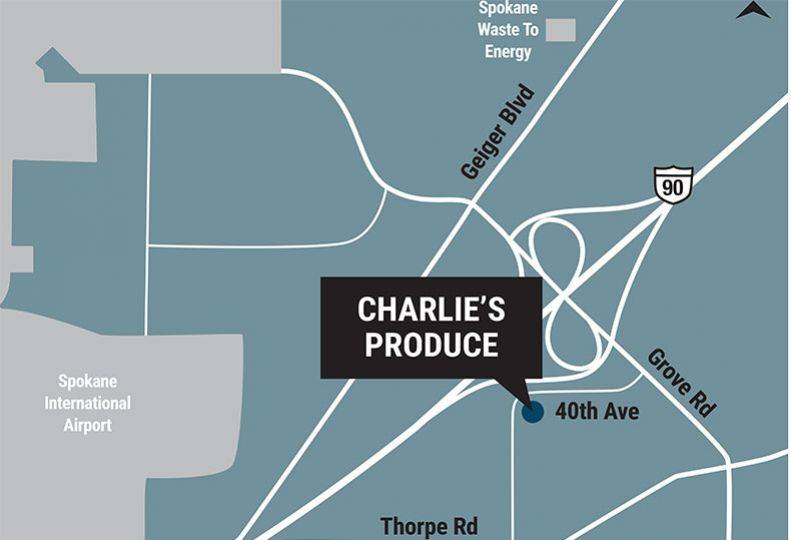 An 84,000-square-foot Charlie’s Produce warehouse and office building is planned at 6505 W. 40th, in West Spokane, according to permit information on file with Spokane County.

The 7-acre site is located directly south of the Interstate 90-Geiger Boulevard interchange and less than a mile east of Spokane International Airport.

The land was purchased by Seattle-based Triple B Ventures LLC, a real property investment company, for $1.3 million in February, according to Spokane County Assessor’s Office records.

A representative of Charlie’s Produce couldn’t be reached for comment.

The warehouse will have a 70,000-square-foot freezer and cooler combination, plans show.

The building’s tallest height is expected to be 36 feet above the finished floor. The exterior will be constructed with insulated metal panels.

About 96 paved asphalt parking spaces are planned for up to 150 employees, environmental documents show.

The facility also will have a concrete truck apron, landscaping around the building frontage, and grass along the perimeter of the site.

The structure will be built on generally flat, vacant land zoned for light industrial uses.

Environmental documents show construction is scheduled to begin this week and to be completed by early October 2023.

Triple B Corp., which does business as Charlie’s Produce, is headquartered in Seattle. The company has seven distribution centers, including one at 3530 E. Ferry, in Spokane’s East Central neighborhood, as well as distribution centers in Seattle; Boise Idaho; Portland, Oregon; Salt Lake City; Anchorage, Alaska; and Los Angeles.

Charlie’s Produce supplies restaurants, grocery stores, institutions, wholesalers, and the marine industry with a range of conventional, organic, and specialty produce, as well as floral items and fresh processed food, according to its website.

•Meridian Construction & Development Inc. has become a licensed contractor in Oregon. The Spokane-based contractor now is fully licensed in six states, with the others being Washington, Idaho, Montana, Colorado, and Arizona, says Mark D’Agostino, president of Meridian.

D’Agostino says that the main benefit of becoming licensed in Oregon is being able to meet clients’ needs for construction services while keeping up with the expanded construction growth in the Pacific Northwest.

“Oregon has been on our list for quite a while based upon the needs we identified,” he says. “We have projects in Klamath Falls and the Bend, Oregon area.”

He says the contracting company plans to become licensed in Texas and New Mexico next.

“In general, we’re still committed to this Eastern Washington and North Idaho area, and, as opportunities come our way, we’d like to be able to support our clients and their needs,” says D’Agostino.

•Demolition of the historic commercial property known as the Vera Block, located at the southeast corner of Sprague Avenue and Progress Road, in Spokane Valley, will wrap up in the next week, leaving the site ready for future development, says Jared Silvey, a member of Legacy Group Development LLC.

Silvey says Rob’s Demolition Inc., of Spokane, will spend two to three weeks removing the 98-year-old commercial building and asphalt at the site.

Three residential structures at the southern end of the property will remain standing.

“We plan on keeping those and fixing them up,” he says.

The site is owned by Sprague & Progress LLC, an investment affiliate of Legacy Group Development, which purchased the site for $914,000 in 2015, Spokane County Assessor’s Office records show.

“We’ve owned the property almost eight years, and we’ve looked at a number of different options for the site,” Silvey says. “We’ve hired a Realtor to represent us and to get it on the market, but we have no firm plans for the property.”

He says Legacy Group Development had considered trying to save the building but decided against it.

“We spent a significant amount of money just on the asbestos remediation, and what was there wasn’t functional for today’s tenants,” he says.