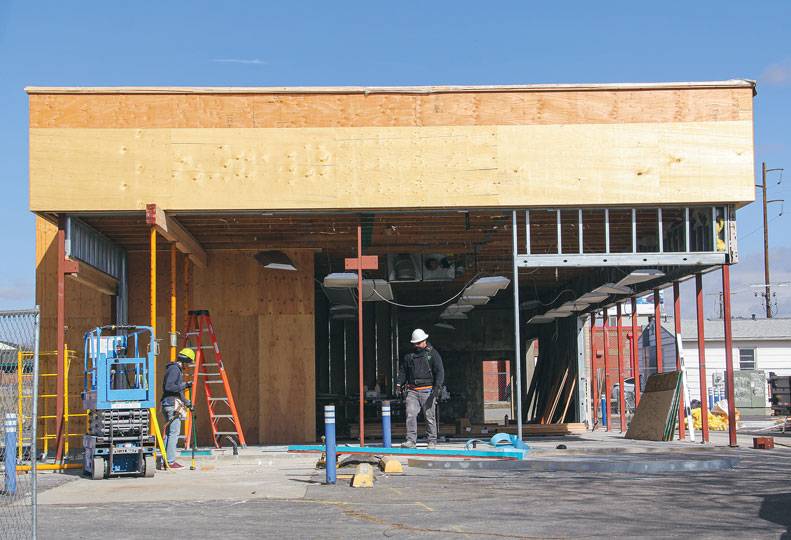 -KEVIN BLOCKER
A new Chipotle Mexican Grill starts to take shape at 209 N. Sullivan Road. Construction on the 2,700-square-foot building is expected to be completed in late summer or early fall.

Chipotle Mexican Grill plans to open a new restaurant in Spokane Valley and is well underway in remodeling an existing structure at 209 N. Sullivan Road that once served as the home of a Tesoro gas station.

Justin Folkins, a commercial real estate broker with RenCorp Realty LLC, of Spokane, helped negotiate the transaction between the landlord and Chipotle.

“There is going to be more of a drive-thru focus at that location than there will be on eating in and dining,” Folkins says.

He anticipates construction will be completed in late summer or early fall.

The Spokane County Assessor’s records lists Ramka Properties LLC, of Veradale, as the property’s owner. Folkins says the landlord owns “other gas stations and properties” in the surrounding area.

“Not long after acquiring that property, they had the (gas) tanks taken out and went through the environmental process of cleaning it, recognizing that it would be a good location for a restaurant,” Folkins says.

Folkins says Chipotle inquired as early as 2017 about the property.

“It’s been a long ordeal with a lot of breaks in action in between,” he says.

Chipotle operates two restaurants in Spokane, one at 930 N. Division and the other at 9602 N. Newport Highway.

Founded in 1993, Chipotle debuted in Denver and quickly grew to 16 restaurants across Colorado. It experienced exponential growth when McDonald’s Corp. became a major investor in 1998. Since then, McDonald’s divested in 2006 and Chipotle moved its headquarters from Denver to California, according to the company’s website.