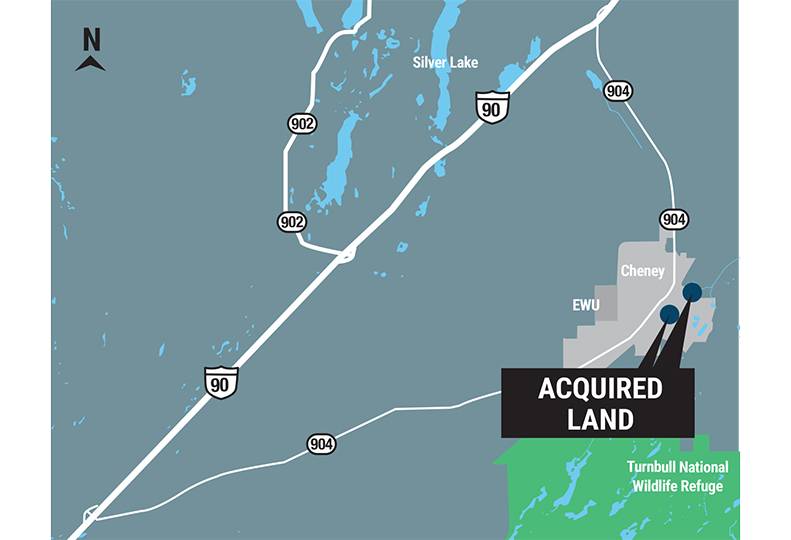 Potential uses for 228 acres of land acquired last year by the city of Cheney include buffering some city operations from potential conflicting uses and moving some operations from leased land, says Mark Schuler, Cheney city administrator.

The land is located east of the city center, across the BNSF Railway Co. right of way, and on both sides of the Union Pacific Railroad Co. tracks.

Parcels just southwest of the Cheney utility building and recycling center, at 100 Anderson Road, will help ensure that any land use will be compatible with existing and potential future city operations, he says.

“It’s like a buffer around city facilities, so the use doesn’t hamper city operations,” Schuler says. “The city owns a lot of land out there.” Spokane County Assessor’s records show Cheney owns at least another 465 acres of undeveloped land abutting the most recently acquired parcels.

The main wastewater treatment plant, which is located at 112 Anderson Road, adjacent to the recycling center, has a capacity to treat up to 1.5 million gallons a day on an annual basis.

Three large contiguous parcels, totaling over 100 acres east of the utility building and recycling center, consist of undeveloped land and wetland areas that provide Cheney with opportunities to partner with other entities for wetland mitigation banking, Shuler says.

Wetland banking is the restoration, creation, or enhancement of wetlands to compensate for impacts to wetlands at another location. Such a wetland bank, which would require approval through the U.S. Army Corps of Engineers, would generate credits that the city sells to qualified parties.

“Wetland mitigation banking is commonly used to compensate for wetland impacts from development, but it also is used for impacts from agriculture,” Schuler says.

Schuler contends wetland banking will be a crucial means of offsetting “unavoidable impacts of building and construction around Spokane International Airport and other unincorporated areas of the county.”

The combined purchase price for the seven parcels was $550,000, says Schuler. Negotiations had started with the city’s initial offer of $360,700, when the Journal last reported on the acquisition plans early last year.

“Lyle Dare owned the land and passed away,” Schuler says. “His children didn’t have a use for the property and reached out and gave us the first opportunity to purchase it.”

Schuler says the land was paid for through enterprise funds specific to the wastewater treatment facilities and the Cheney Light Department, the city-owned electric utility that serves 5,600 customers.