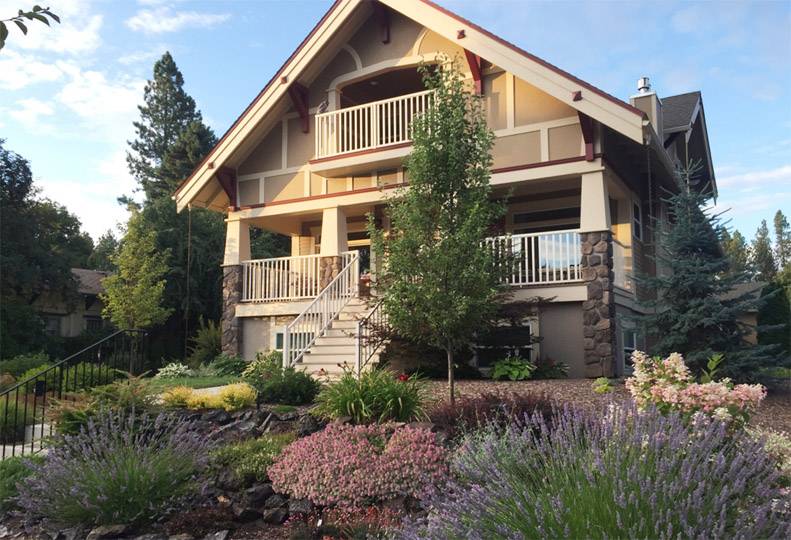 -—City of Spokane
The landscaping at this Spokane home is an example of the type of improvements that could be eligible for the water-conservation incentive.

Marlene Feist, City of Spokane director of strategic development for public works and utilities, says a program intended to help Spokane residents conserve water through landscaping is seeing some success.

The SpokaneScape program incentivizes the use of water-saving landscaping, such as mulch and native plants. For every square foot of turf converted to mulch or drought-tolerant plants, approved applicants can receive a one-time deduction of up to $500 on their utility bill; Feist says the deduction is typically enough to cover several months’ worth of utility bills. Feist says 37 SpokaneScape projects have been preapproved so far this year, three of which have been completed.

“What we’re trying to do is encourage people to think about how they can look at their landscaping differently and replace some of their water-thirsty lawn with plantings that are more water efficient,” Feist says. “We’re helping to redefine what’s considered beautiful landscaping in our community. It doesn’t just have to be a manicured green lawn. There are other options available.”

There are several stipulations applicants must satisfy to receive the deduction, including removing at least 300 square feet of turf and replacing it with more sustainable options, like drought-tolerant native plants, raised garden beds, or mulch. The turf to be replaced must be fully visible from a street or other public area.

Residents applying for the rebate program must provide a plan to the city that details how they will convert their lawn to a more water-savvy space; approved plans must include at least 50 percent coverage by mature plants — meaning residents can’t simply pave over their lawn or use artificial grass.

Feist says a resident who replaces 1,000 square feet of turf with water-conserving landscaping can save up to 13,000 gallons of water—enough to fill a small swimming pool.

The program can dole out as much as $30,000 in rebates this year; Feist says the funding for the program comes from the water and wastewater management department.

Feist claims the department has fielded calls and emails from hundreds of municipal water customers who are interested in the program.

Feist says a similar program the city attempted years ago wasn’t as successful.

“I think the biggest difference is that there’s just generally more acceptance for this kind of landscaping today than there was eight or 10 years ago,” Feist says. “I think it’s changing attitudes around our water as a resource.”

People may also be more interested in landscaping options that require less time and effort to maintain, Feist says.

Feist says that regardless of how many more Spokanites take advantage of SpokaneScape this year, the program will be offered next year.

“The thing is, it takes people a while. They have to plan it; they have to implement it,” Feist says. “We know that some people are thinking about it, but they won’t actually do it until next year.”

Feist says the city is looking into combining the program with other efforts to reduce water usage.

“For example, we’re looking at whether we should adopt some irrigation standards that we include when people come in to get a permit for a new house or those kinds of things,” Feist says. “We are, as a city, committed to looking at how we can use our resources most wisely.”

Incentivizing water conservation by offering water bill rebates is crucial to the success of the program, Feist says.

“Affordability is a major concern,” she says. “If there’s a way that we can encourage people to make a change that then has a lasting impact on their bill, that’s a positive thing for our community.”

Those interested in the program can find examples of water-conserving landscape plans and a list of drought-tolerant trees and plants at waterstewardship.org.