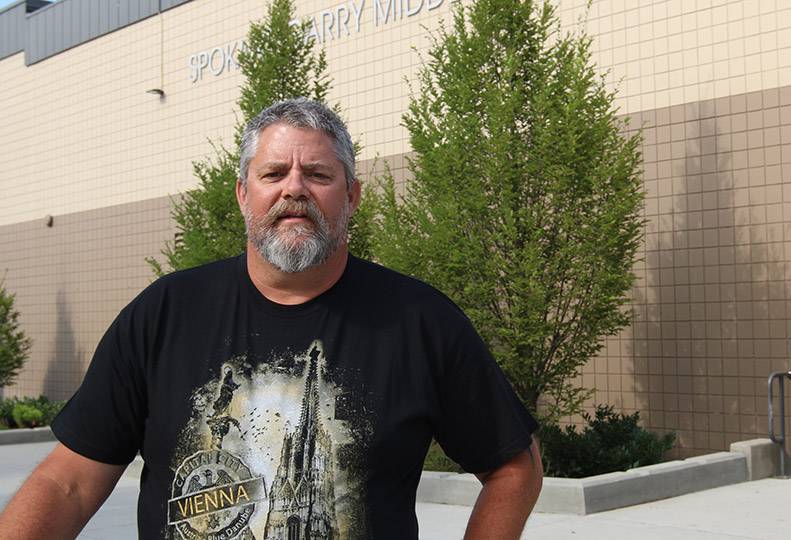 -—Judith Spitzer
Garry Middle School Principal Rob Reavis says poverty is a top indicator of at-risk students, and up to 93 percent of students at that school annually qualify for free or reduced-price lunches.

A group of educational, business, and nonprofit partners—brought together through an innovative civic model—will collaborate with Spokane Public Schools to expand efforts to help at-risk middle school students in northeast Spokane.

The goal is to increase the likelihood that the students will graduate from high school.

The group, calling itself Community Partners for Middle School Success, is a collaborative of local funders headed by the Spokane-based Inland Northwest Community Foundation. It recently awarded a three-year, $400,000 grant to Gonzaga University, Spokane Public Schools, the Boys and Girls Club of Spokane County, and Communities in Schools of Spokane County, a dropout prevention group.

Long term, the effort is expected to increase graduation rates at Rogers High School and also to boost the number of Rogers graduates enrolling in post-secondary education.

Gonzaga University’s School of Education faculty and students will provide in-and out-of-school support for students at the two middle schools beginning this fall. The GU Center for Community Action and Service-Learning (CCASL) mentoring programs and service-learning students will provide social and academic support and family engagement strategies. Communities in Schools will provide case-management services and family support, while the Boys and Girls Club will increase access to after-school and Saturday programs for students.

Other specifics of the program will be determined by the unique needs of the community, says John Traynor, assistant professor at the Gonzaga University School of Education.

“We’ll work with the schools to establish and coordinate the programs with the intent and hope of working together,” Traynor says.

He says Gonzaga has been working since June doing preparations and legwork to make sure the program will be up and running at the two middle schools come fall.

“The big push will begin in the fall. It’s an exciting opportunity that will enable us to collaborate with these schools and students,” he says, adding, “We have kids for a little less than 20 percent of their waking hours during their school age years, so increasing support for these kids and coordinating with the schools could be a really powerful model.”

Approximately 10 percent of students at Shaw and Garry middle schools are at higher risk of dropping out due to attendance issues, and about 15 percent are at higher risk due to behavior or course completion issues, Traynor says. He estimates that about 100 students at each middle school will be identified as high-risk during each year of the three-year initiative and will be targeted for community and school-based support.

Traynor says middle school years are critical and can be a powerful intervention time for adolescents.

“Kids drop out in high school, but they check out in middle school,” he says.

Studies show there can be any number of causes for why kids struggle academically, ranging from learning disabilities and poor nutrition to physical and even sexual abuse, or due to a parent being incarcerated, he says.

“Those make it tough for kids to show up and learn in school,” Traynor says.

“Between 88 to 93 percent of students at Garry and Shaw middle schools receive free and reduced lunch every year,” Reavis says. Research shows high poverty levels correlate with increased risk that students will have problems in school, he adds.

“There are a myriad of reasons why students might be behind,” Reavis says. “But for some, the 180-day school year is not enough.”

Students leaving behind self-contained, smaller learning environments in elementary classrooms must transition to multiple-shift schedules with more students and six or more teachers, he says.

“Developmentally, some of them haven’t hit that level of maturity,” he says. “Add to that all the prepubescent hormones and that they’re experimenting with behavior, language, and friends … we’re trying to keep them on the right trajectory so that they have skills and the capacity to choose when they get to high school.”

SPS administrators receive information each spring on incoming middle school students, identifying whether they are at risk based on attendance, behavior problems, and grades.

“We look at the students who are at risk so we can make sure we’re doing everything we can to support them academically, with counseling, mentoring and other services,” Reavis says.

Mark Hurtubise, Inland Northwest Community Foundation president and CEO, says one of the goals of the initiative is to identify interventions that work to keep middle school students on course, to implement sustainable collaboration among Hillyard community participants, and to validate a new civic model that uses co-funding to address a social issue. Washington State University will collaborate as an external evaluator, collecting data on what works well and tracking the project’s impact.

Hurtubise contends the initiative has long-term consequences for the community.

“This dropout issue is not just an economic issue but failure of a community. We want students to be successful and fulfill their highest potential. We want to empower kids to have control over their own destiny,” Hurtubise says.

INWCF has been part of an educational attainment initiative since 2005 when it helped create a group called Priority Spokane to focus on education and dropout prevention. Since then, with the assistance of Gonzaga University programs and an early warning system developed by Spokane Public Schools, the on-time graduation rate for Spokane public schools has risen to 79 percent in the 2012-2013 school year from about 60 percent in the 2007-2008 year.

Partly in an effort to build on this momentum, Hurtubise says he approached specific community members and organizations, asking for contributions of $50,000 each to support the initiative. Donors had to agree to have common written outcomes, shared responsibilities, and agreed-upon timelines for accomplishing significant improvement in the experiences of the Shaw and Garry Middle School students.

“We were essentially asking these co-funders to come in as venture capitalists,” he says. “When you add the resources provided by the recipients of this $400,000 grant, the total support of the three-year initiative is about $1.2 million.”