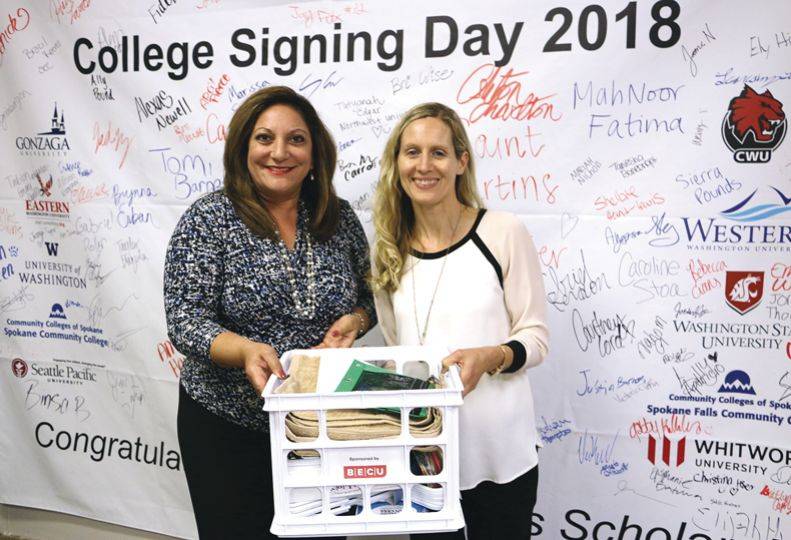 The College Success Foundation, a Bellevue, Wash.-based nonprofit organization, has elevated its Inland Northwest presence and established a strong philanthropic base of support here since opening a Spokane-area office in 2014.

The foundation provides an integrated system of supports and scholarships to help inspire underserved and low-income students to finish high school, graduate from college, and succeed in life. It also puts a strong emphasis on encouraging and clearing obstacles for first-generation college students and students of color. It says it already has assisted more than 1,000 Spokane and Yakima students. “We’re really proud of where we’ve come over the last four years. We really started at the ground level,” says Susan Joseph Nielsen, CSF regional executive director. Nielsen, who has an extensive public relations and corporate communications background here and is well known within the Spokane-area business community, joined the nonprofit the year the regional office opened and has spearheaded efforts to advance public awareness about its mission.

In one example of the big-name philanthropic support the foundation is attracting under her local guidance, Ed and Beatriz Schweitzer earlier this year made a $500,000 commitment to continue supporting its programs and scholarships.

Ed Schweitzer is the founder of Pullman, Wash.-based Schweitzer Engineering Laboratories Inc., which employs more than 5,200 people around the world. Since 2015, CSF says, the Schweitzers have invested nearly $1 million in its holistic approach to college access and completion.

Earlier this year, the foundation announced that Avista Corp., the Spokane-based energy company, had agreed to contribute $25,000 to its programs. The two-year investment, it said, will fund college scholarships to high school students who participate in the CSF Achievers Scholars program available to seniors at Spokane Public Schools’ Ferris, Lewis and Clark, North Central, Rogers, and Shadle Park high schools.

The Achievers Scholars program involves a total of 500 students at the five high schools each academic year, with 50 juniors and 50 seniors enrolled from each school.

As evidence of its effectiveness, it points to statistics showing that the students who participate in its program, locally and statewide, have far higher high school and college graduation rates than other low-income students in the state. It also asserts that its program yields community benefits through decreased incarceration and social service costs—and increased tax revenue.

The donations come in various forms and for a variety of purposes. BECU, for example, provides funding for “college-ready” packs, which are small crates that include items such as plastic hangers, bath towels, school supplies, a sewing kit, a flash drive, and a surge protector, and are provided to college-bound Achievers Scholars. Earlier this month, in support of the foundation’s efforts, BECU also hosted a Financial Reality Fair, at North Central High School.

“There’s a lot of great participation by our donors,” who support its mission of breaking the cycle of generational poverty that many underserved students experience, Nielsen says.

“As a nonprofit, we rely on the philanthropic and charitable giving of a variety of sources. Spokane is extraordinary in its giving,” she adds. Still, she says, the money the nonprofit needs to raise each year from charitable contributions is “a heavy lift.”

Shannon Demant, the foundation’s Spokane and Yakima program manager who joined the organization here in 2015, says, “We would not be where we are at without Susan’s vision and leadership.”

On a statewide basis, strong philanthropic support dates back to the organization’s creation in 2000, initially under the name Washington Education Foundation, as an outgrowth of the Washington State 2020 Commission on the Future of Postsecondary Education created by former Gov. Gary Locke. In its report, that commission presented a 25-year plan to raise academic achievement levels and to create a more seamless system of lifelong learning in the state’s postsecondary schools.

The late Bob Craves, one of the founding officers of Issaquah, Wash.-based Costco Wholesale Corp., co-chaired the 2020 Commission and, together with prominent West Side civic and educational leader Ann Ramsay-Jenkins, co-founded what now operates as the College Success Foundation. Both Craves and Ramsay-Jenkins served for a number of years together on the Washington State Higher Education Coordinating Board. Ramsay-Jenkins continues to serve on the CSF board of directors, and Costco is a major donor to the foundation.

The foundation secured a $100 million, 10-year grant from the Bill & Melinda Gates Foundation and concentrated most of its early efforts on the west side of the state, operating mostly just as a scholarship-granting organization, Nielsen says. After that grant expired in 2010, the organization’s supporters spent three years securing alternate funding sources and formulating plans to enhance its program offerings, she says.

The nonprofit now strives to provide a continuum of student supports beginning in middle school, picking up again when students become juniors in high school, continuing through college, and extending into its scholars’ post-college lives, including through alumni interaction.

It currently works with nine school districts across the state, including Spokane Public Schools and Yakima School District on this side of the Cascades, and employs more than 120 people statewide. It also operates a Washington, D.C., office that opened in 2007 and serves students in two of that city’s wards. Nielsen lauds the Spokane school district for being “a great partner” in helping advance the foundation’s mission.

The nonprofit’s staffing here includes Nielsen, Demant, and programming and advancement assistant Lisa Riley in the Spokane Valley office, plus five college preparatory advisers here, one each imbedded at the five Spokane high schools, and two in Yakima.

At the middle school level, the nonprofit is served by six college and career coaches—three here and three in Yakima—but they technically are employed through the national AmeriCorps program, rather than by the foundation, Nielsen says. The foundation’s middle-school efforts currently are focused here just at Garry, Glover, and Shaw middle schools, she says.

Nielsen says College Success Foundation’s operation here became self-supporting within about 18 months after launching. On July 1, it began its latest fiscal year, operating on a $1.8 million budget, of which about $1.1 million is secured through educational and government sources, leaving her with a $700,000 gap she needs to fill, she says.

A 21-member CSF-Spokane Regional Board, consisting of business, education, and community representatives, provides guidance to the nonprofit on this side of the state, and Nielsen says she hopes to augment the board with CSF alumni.

Along with the various charitable donors on which it depends, including from businesses, the foundation receives strong support from Greater Spokane Incorporated, the main business-development association here, and participates in GSI’s Business AfterSchool program, she and Demant say.

One significant recent event for the foundation here, held last month and called the Achievers College Experience, involved transporting 250 students, loaded onto seven charter buses, to the west side of the state for extensive tours at the University of Washington, Western Washington University, and Seattle Pacific University.

Demant emphasizes that as part of the whole college-prep process, it’s important for aspiring college students to be deliberate in evaluating various institutions to ensure the one they ultimately choose to attend is a good fit for them.

The West Side trip, for students considering in-state colleges outside of Eastern Washington, was designed to help them perform that evaluation.

Another major recent CSF-Spokane event, held this year at Gonzaga University in mid-May, is called College Signing Day and is intended to honor and recognize CSF Achievers Scholars academic achievements, Nielsen says. Similar to events when high-profile high school athletes announce what schools they plan to attend, she says, “It’s just a really special evening for our students and their families.”

Ten $500 scholarships are awarded randomly to students who come to the annual event, with some universities offering matching scholarships, she says.

She adds that this year’s CSF Achievers Scholars here will be attending 22 different colleges and universities, with more than $2 million in secured scholarships.

Looking ahead, Nielsen says she’d like to see the College Success Foundation expand its offerings to more Inland Northwest school districts, but that would be dependent on securing more funding.