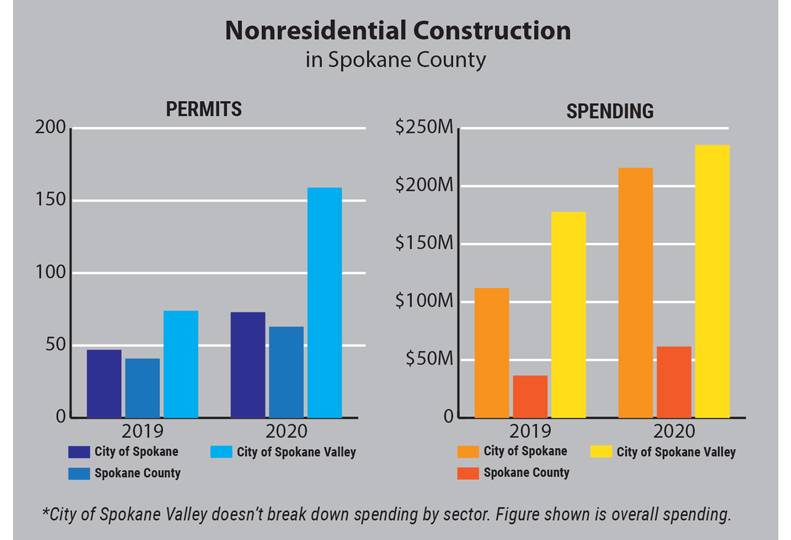 “Right now, we have so many big projects in the works this year that they’re continuing on and that’s keeping people busy,” she contends.

In the city of Spokane, nonresidential construction permit valuation nearly doubled through the first nine months of the year, up to $215.9 million from $112.1 million in September 2019. Additionally, commercial permits issued increased 55%, to 73 year-to-date over 47 at the year-earlier period.

That contrasts from national trends.

AGC reported nonresidential construction spending decreased 4.4% nationwide in September compared with the year-earlier month, as a growing number of construction projects are canceled or placed on hold.

Overall construction spending saw modest gains of 1.5% year-over-year and was largely bolstered by large increases in public and private residential spending, which saw a 9.9% year-over-year jump in September.

This marked the third consecutive month in which private nonresidential spending declined nationally.

Much of the spike in spending in the city can be attributed to entertainment facilities and schools.

The Podium sports arena underway in downtown Spokane added $32.2 million to the total, and educational buildings, which saw double the number of permits compared with last year, comprised $109.7 million of the total nonresidential spending.

The city of Spokane Valley saw smaller increases, with 159 new commercial permits issued through September, up from 74 during the year-earlier period. Overall spending was up in 2020 to $235.5 million from $177.8 million in 2019.

Stewart says it’s likely that there will be a slowdown within the next two to three years as people put future projects on hold and public projects get moved to the back burner as local governments grapple with budget shortages brought on by pandemic-induced declines in revenue.

“Contractors are looking cautiously toward the future. Some still have a backlog,” she contends, though she notes that contractors have said they’re seeing decreases in revenue forecasts compared with last year, so it’s likely overall spending will begin to decrease.

Governments often turn to construction and infrastructure projects as a type of economic stimulus when budgets are tight, she contends.

“So, we’ll wait and see what they do moving forward. I do think we’ll see a bit of a reduction in capital programs at all levels,” she says.

She expects much of the future spending will be boosted by large transportation projects that have already been funded, such as sections of the North Spokane Corridor.

Stewart says only a small number of projects have permanently shut down. Most that were issued permits before or during the start of the pandemic have continued.

At Spokane-based Baker Construction & Development Inc., Brian Valliant, senior vice president of construction services, strikes a much more optimistic tone on the state of the market, noting that the construction company is on track to have another record-breaking year.

“For us, even in this crazy year of 2020 and a pandemic, commercial construction is excellent, it’s record-breaking busy for us,” he claims.

The company is maintaining a strong backlog, which he attributes to the continued influx of people from the west side of the state and California creating multifamily and single-family housing demand.

“That multifamily market and the residential aspect of that is a very strong market right now,” he says.

Despite being residential buildings, multifamily apartments are generally considered commercial projects, and are coded as such in city and county databases. AGC does include multifamily developments in its residential counts.

Other sectors that saw strong demand at Baker Construction include health care facilities and financial institutions.

“We like where Spokane is going right now,” he says.

Other factors bolstering the industry in Spokane are low interest rates and a strong stock market, he says.

Also on the company’s docket are two mixed-use developments in Kendall Yards, a large industrial project in Spokane Valley, multiple commercial projects in Moses Lake, the Spokane Special Care Community housing on the North Side, and the Spokane County Mental Health Crisis Stabilization building, he says.

Residential permits issued in the cities and county declined this year through September compared with the year-earlier period.

In Spokane, residential permits decreased 37.9%, to 154 through September 2020, from 248 during the same period a year prior. Spending also decreased to $51.9 million through September of this year from $66.1 million for the first nine months of last year.