Communities in Schools serves through COVID-19

Organizational efforts picked up in pandemic 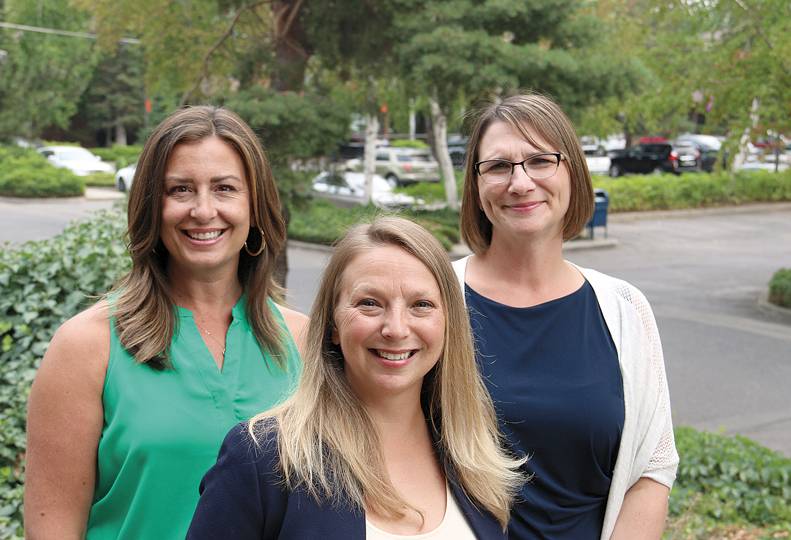 -Kevin Blocker
Kelley Hinrichs, Debra Raub, and Rebecca Clemens are among the nine employees who work at Communities in Schools year-round. During the academic year, the organization employs 28.

Once housed in 400 square feet of diminutive office space in downtown Spokane, the nonprofit Communities in Schools of Spokane County in early 2020 moved to three times that amount of space in the Tapio Office Center.

It hasn’t even been 18 months since the move to 104 S. Freya and office staff is already looking for a larger suite due to continued growth in staff.

Communities in Schools also added another three staffed positions through learning grants in 2020. During the school year, the nonprofit employs 28 full-time employees while nine work full-time year-round. The nonprofit also added three additional site coordinators to the program, she says.

The organization here is part of the national Communities in School network, a federation of independent organizations in just over half of the U.S. states and the District of Columbia working to reduce high school dropouts. At the local level, the nonprofit works with existing community resources toward reducing dropouts by fostering partnerships with students and their parents or guardians.

The role of site coordinator at a school is vital, as the coordinator serves as a bridge between parents and students and administrators at schools in neighborhoods where dropout rates tend to be acute. Mentoring programs are available at several other schools as well, Clemens says.

In spite of closed schools, site coordinators and more than 100 volunteers made more than 2,000 visits to students and families in their homes to deliver food and personal hygiene supplies, while also taking note of other needs they might have, Clemens says.

With available grant funding, the organization purchased more than $20,000 worth of hygiene products to distribute to families, she says.

More than half the nonprofit’s income—54%—is from in-kind donations, according to the most recent annual report. Other funding sources include schools and government entities, grants and foundations, and special events.

In the 2020-21 fiscal year, the organization served close to 60,000 students in 14 schools across five school districts in Spokane County and provided food services to 43,648 of those students.

Says Clemens, “Even when schools closed, we didn’t. I think our (site) coordinators got busier continuing to connect with students and their parents in serving their needs during the unknown of the pandemic.”

The organization quickly partnered with Spokane-based Second Harvest Inland Northwest and had volunteers involved in food distribution efforts to serve families and individuals across the region every week from April 2020 to March 2021, she says.

Says Debra Raub, the organization’s funding development director, “It was kind of like a go-team kind of feeling. It was a real community feel; very supportive.”

The weekly food distribution efforts also offered another chance for the student mentors, site coordinators, and volunteers to see parents and students coming through the food distribution lines, Clemens says.

“It was a great opportunity for our staff to be able to get to see some students and some parents that they weren’t getting to see by not being in school,” she says.

By the start of the most recent school year, there were scores of students and families who hadn’t been heard from since the onset of virtual learning when COVID-19 spread to Washington state, Clemens says.

“Our staff had to get very creative to begin to start putting eyes on some kiddos,” she says.

Student mentors, site coordinators, and volunteers then approached school administrators and teachers to help identify the most at-risk and vulnerable students and began conducting home visits checking on their welfare, Clemens says.

“We have established some strong relationships with parents who typically do not have a large trust from their own past experiences in school,” she says.

Looking ahead, Clemens says the organization will begin offering parent education classes, such as financial planning, to help adults move their lives forward.

Through the summer, the nonprofit is helping oversee programs for students at four schools in the Spokane School District and one in the Cheney School District, she says.

For the recently concluded school year, Communities in Schools trained its staff and volunteers on ways to help students navigate many of the traumas they were experiencing at the hands of the pandemic, she says.

“When students did come back, we saw a huge amount of social anxiety,” she says. “Students unable to sit in the lunchroom, students who were just too overwhelmed to sit in the classrooms, too many people ... too much noise. Our staff was able to provide break spaces for those students.”

Kelley Hinrichs, the nonprofit’s volunteer services director, says she was pleased with the high level of service staff and volunteers were able to provide despite the upheaval caused by COVID-19.

Before the pandemic, Communities in School tended to draw an average of 450 volunteers per year, she says.

“We have more sporadic volunteer opportunities, and mentoring is a huge one,” she says. “Last year was obviously a lot different.”

Still, with the help of area college-age students, Communities in Schools managed to launch a virtual tutoring program for about 20 students per week during the school year, she says.

“We know that that learning loss was huge. We had a lot of students that needed that help,” says Hinrichs. “We have plans to hopefully provide in-person support but also keep that virtual connection for an after-school support for those students who need it.”