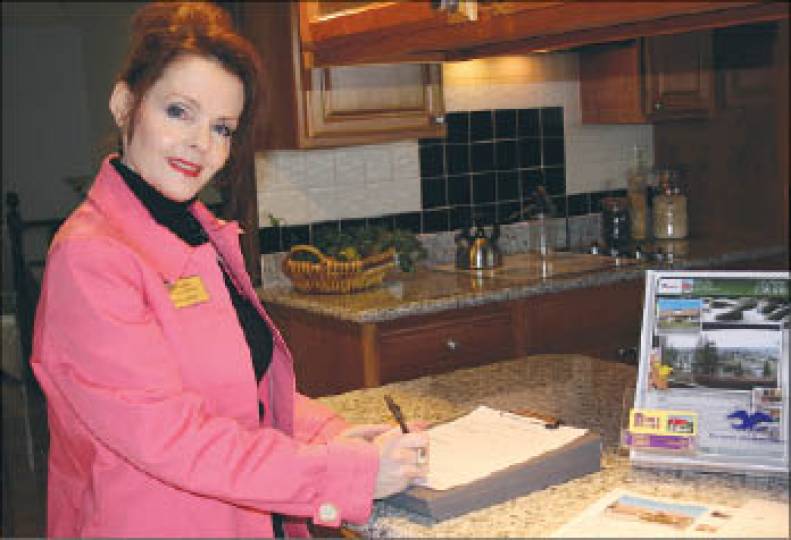 In the currently stressed real estate market, an increasing number of homes are sitting on the market for several months or more at a time, and many of them are left empty until a prospective buyer comes along.

In a growing number of cases, a professional house sitter is sitting with them until they sell, says Diana Uphus, who co-owns Spokane Valley-based Diana's Home Sitting Services Inc. with her husband, Kevin Uphus.

The couple's 10-year-old business offers to homeowners a service through which house sitters occupy a home while the homeowner is gone for an extended period of time or while the owner is trying to sell the property.

Besides her husband, Uphus says her son Derek also works at the business, which is located at 101 N. Evergreen Road in a former home that the Uphus' own and have converted into offices.

The service the company offers is free to homeowners: The company generates its revenue by charging each house sitter $300 to $500 a month to live in a residence until it sells or until a homeowner returns. Uphus says most home sitters pay around $450 a month, and that the monthly fee ranges depending on the size of the home, how much utilities cost, and the amount of yard maintenance the home requires.

A potential home sitter can expect to stay for a minimum of one month, she says, but some sitters have remained in a home for more than a year.

Due to the increasing number of vacant homes on the market during the last two years and other economic factors, the business over that period has tripled its revenues and also the number of home sitters it's managing, Uphus says.

Uphus declines to disclose how many home sitting situations she's managing at this time, but says she has a ceiling of around 30 homes she won't go above so she can manage all of the properties effectively.

"I want to make sure I'm doing my job efficiently and meticulously," she says.

Even though homeowners don't pay for the service, they are assured their residence will be cared for in their absence or until it sells, Uphus says. She says she conducts random inspections of the homes during the sitters' stay to make sure the homes are being properly cared for and are presentable at all times in the event of a showing to a prospective buyer.

"I inspect the homes on a regular basis," she says. "I will inspect them and send the homeowner an email, and I'll also tell the sitter I was by. The ongoing communication gives the homeowners peace of mind."

Uphus says a variety of clients besides vacationers and those selling a home seek her company's services. She says, for example, that she'll find home sitters for professors on sabbatical, as well as for families that might need someone to care for an elderly parent's or grandparent's residence that could remain vacant for a long period of time.

A number of people that become home sitters for Uphus are professionals who may have to locate here temporarily for work and don't want to deal with the long-term obligation of a lease, she says.

"Some of these homes are very nice and they are only paying $450 to $500," she says, adding that she's found sitters for homes here valued at upwards of $1 million.

She adds that due to the recent instability of the real estate market, she's also had people come to her business and request to home sit because they lost their home to a foreclosure.

"Some homeowners had to walk away from their homes, and prior to this economy, they had good credit," she says.

All home sitters are required to sign and follow strict rules that, among other things, prohibit large groups of people from staying in the homes and require beds to be made each day and the home to be kept free of clutter at all times. Most of these rules are designed to protect the home and to make sure it's presentable at all times in the event of a showing to an interested buyer, Uphus says. She adds that one of the major requirements of a sitter is that he or she is willing to leave the home while it's being shown to prospective buyers.

Uphus says her home sitters are required to maintain the residences at all times, keeping them clean, presentable, and secure, and also are responsible for paying all utility costs for the duration of their stay. She adds that depending on the time of year, a house sitter also is required to mow the lawn and keep walkways and driveways clear of snow and ice.

"I look at all the homes as a prospective buyer or a Realtor," she says.

Uphus says that all prospective home sitters are extensively screened before being placed in a home. Screenings include a background check, credit history, employment verification, and consumer profile. All sitters also are required to carry a minimum $100,000 liability insurance policy in case of any damage that occurs while they are staying in someone else's home.

Home sitters must be nonsmokers and aren't allowed to have a pet unless the homeowner approves it, she says.

If a home a sitter is staying in happens to sell, Uphus says she notifies the sitter right away so the sitter can make plans to relocate, and she'll ask whether the sitter is interested in moving into another vacant residence to continue home sitting.

Uphus says she's had several home sitters who she's helped relocate to other empty homes once homes they've been staying in have sold. Home sitters can request to stay in a residence in a specific area of town, and Uphus says she'll also try to match the sitter to a home that fits his or her lifestyle needs.

Sitters moving into a vacant home that's for sale are required to provide their own furnishings, and Uphus say she tries to match the style of furniture the sitter has to the house she picks for them. She adds that in most cases she'll also help stage an empty house with her own decor items to complement the sitter's belongings. If a homeowner is leaving their residence for an extended period of time and plans to return, the sitter is able to use the owner's furniture, she says.

To find a vacant home for an interested home sitter, Uphus says she turns to a large network of real estate agents here. Agents also will contact her directly if they have a seller who wants to find a home sitter while their property is on the market.

Uphus says she got the initial idea for her business after vandals damaged a home she and her husband were trying to sell and that was unoccupied while they were in the process of building their current home in the Otis Orchards area. Because the vandalized home had been vacant for more than 30 days, their insurance policy wouldn't cover any of the damage.

"We got a renter in and that gave us the whole concept of home sitting and what people can do with vacant listings while they're on the market," she says. "(A sitter) can maintain the inside and outside, move in with their furnishings, and give the homeowner relief of the utilities and maintenance while allowing them to keep their insurance."

She says their experience isn't uncommon. Unoccupied homes have a higher chance of being broken into or vandalized. She adds that most insurance agencies charge higher premiums to insure unoccupied homes, and that if a home is empty for a certain period of time, some agencies won't cover any damages that may have occurred, she says.

In the 10 years since she started the business, Uphus says she's only had a few negative situations with home sitters, such as minor damages to a home when a sitter was moving in or out. She says that most of the time she's able to take care of such things right away with no hassle to the homeowner.

"You address it and take care of it and stand behind the fact that (the sitters) are reasonable and responsible people," she says.