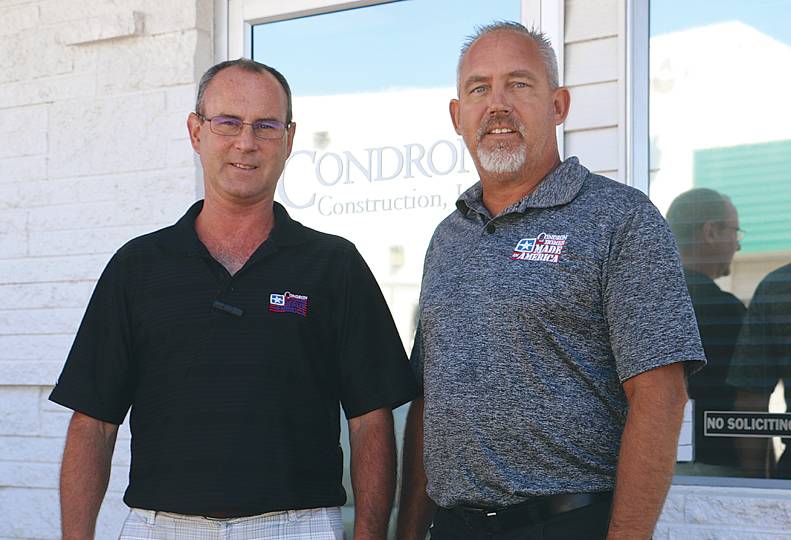 Around the time of the Great Recession, owner Corey Condron decided the company needed to get out from the fray created by a glut of companies building mid-range homes.

"That market was so heavily saturated with some of the larger builders and their buying power, we just couldn't really compete with the products they were putting out," Roberts says. "We let the affordable builders kind of battle out that market."

Roberts says the company had noticed a dearth of homebuilders in the area that cater to customers who seek to build a high-end home.

"What we found was people wanted high-quality, low-maintenance materials in their homes, so that's what we geared toward," Roberts says.

The company primarily caters to empty nesters and those who are looking for a home in which to retire.

However, Condron says the company has been experiencing a shift in the demographic of people buying high-end custom homes.

"Up until about a year ago, it was about 90% empty nesters; now, we seem to be getting more families that are willing and able to pay $500,000 for a house," Condron says.

"We're getting some good-paying jobs into the area," he says. "Some of those (customers) are transfers from the West Side who are coming over here to follow a job that gives them the ability to afford a $500,000 house."

Roberts adds, "We've seen several couples that work from home, so they can come to this area from the West Side and enjoy a little bit better living and the housing is less expensive. When you talk $500,000 here locally, that's quite a bit, but when they come over here, they say, 'Gosh, homes are inexpensive.'"

Like older homebuyers, families looking to build a custom home typically don't want to worry about upkeep, he asserts. Condron Homes therefore uses materials that are easy to maintain, such as decking made from a composite, meaning it doesn't need to be stained, unlike wood products.

Customization is a significant draw for Condron customers, he claims.

"We offer the abilities for homeowners to make changes, make custom plans, and build around their ideas," Roberts says.

Condron Homes, which occupies a 2,500-square-foot building at 802 W. Rosewood, projects to sign contracts to build a total of 25 homes this year. Condron says that's down from last year's sales volume of 35 homes, but the decrease isn't due to market forces. He had surgery this past spring, when the company is at its busiest, leading to a drop in the number of homes for which the company was able to secure contracts.

Roberts says that before Condron got into the high-end market, the company was building as many as 215 more homes a year.

"When we first started coming out of the housing depression, we had a pretty steep increase in building permits," Condron says. "Then they tapered off, and they've been level."

Condron says he expects demand to remain high, partly because many customers don't know that homes can be built year-round.

"They don't think that houses can be built all winter long, which they can," Condron says. "It tends to bottleneck them up into spring again. It's pushing that demand father down the line."

Condron says a few unpredictable factors could dictate the state of the market in the next few years, one of which is interest rates.

"Interest rates are going to go up," Condron asserts. "They were supposed to have gone up by now, and they haven't; they keep going down. Nobody predicted that."

"We have an election year coming up, and that always throws a kink into the market," Condron says. "I don't know why (prospective homebuyers) wait during election years. You've still got to live your life."

Condron Homes was established in 1974 by Condron's father, Craig Condron, who retired in 2007 and sold the business to his son. The company employs nine people.