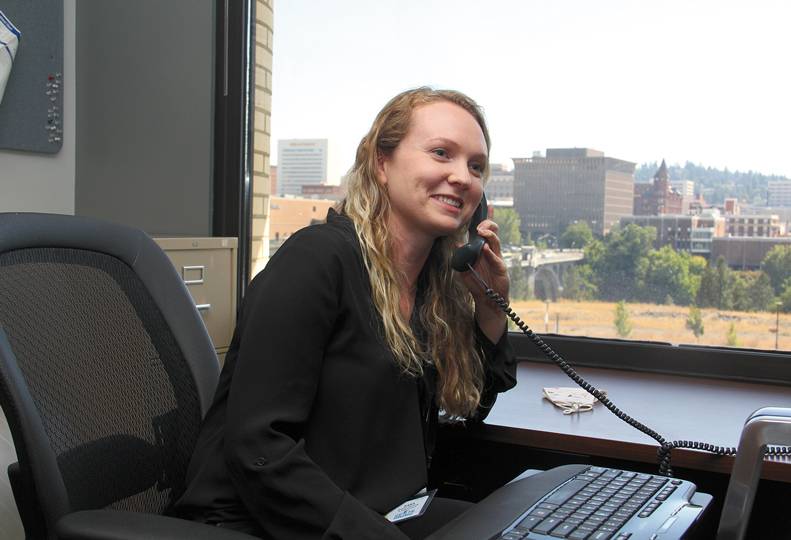 -Virginia Thomas
Sara Rodgers, shown here in the Spokane Regional Health District offices, is one of more than 100 contact tracers who are working in the Spokane area.

The number of contact tracers has risen in Spokane County along with the spread of COVID-19.

Susan Sjoberg, program manager for disease prevention and response at Spokane Regional Health District, says that before coronavirus struck, SRHD had five epidemiologists who conducted case investigations and their own contact tracing.

Now, after more than 5,000 positive tests in Spokane County for the virus since March, more than 100 people at the district are dedicated to investigating cases of COVID-19 and tracing contacts, and analysts say the total number of contact tracers in the Spokane area is more than that, due to some employers hiring their own tracers.

Contact tracers help with investigations of infectious disease cases by identifying, contacting, and educating those who have been exposed to someone with an infectious disease. Because COVID-19 is spread primarily by contact with other people, contact tracers are important in stopping the spread of the virus by helping those who have or may have been infected to understand why it’s important for them to stay home and avoid contact with others.

“Contact tracing is just one step of what epidemiologists do with every case they investigate,” Sjoberg says.

Aside from COVID-19, more than 90 diseases are reported to SRHD for case investigations by disease investigators, she says. But coronavirus is the main focus of most of the new contact tracers now.

When the virus arrived in Spokane, Sjoberg says SRHD scrambled to train employees to meet the state mandate of at least 15 contact tracers per 100,000 people. At first, SRHD trained 75 of its own staff to conduct contact tracing.

“We had everybody identified and certified after taking the required training, but realized shortly thereafter that we can’t keep all 75 of those staff from their regular jobs,” Sjoberg says. “We quickly shifted gears and solicited the help of the Public Health Institute.”

The Public Health Institute is an Oakland, California-based company that conducts research related to public health, and regularly partners with public health departments. Of the $91 million in Coronavirus Aid, Relief, and Economic Security Act funding allocated to Spokane County, about $1.4 million has been earmarked to pay for contact tracing services through the Oakland-based organization.

“Their goal in this contact tracing partnership is to hire locally as much as possible,” Sjoberg says.

“It makes sense in that as they’re returning to in-person classes, they want to have control over the localized population and make sure that spread doesn’t occur,” McBride says.

He says he’s seen some larger companies advertise contact tracing jobs, but he expects those positions will be uncommon. Most companies likely will add contact tracing duties to the workload of a current employee, he says.

“Early on in the pandemic, a lot of think pieces projected that this could be the new hot job,” McBride says. “It seems like that … isn’t necessarily occurring in quite the scale that was initially thought. If you have all your staff working at home, there isn’t really a need to do contact tracing within an office environment.”

Through Public Health Institute, contact tracers make almost $23 per hour, according to the company’s website. Contact tracers who are bilingual make about $1 per hour more. That’s a little higher than the national average for contract tracers, which job postings website Indeed says is about $20 per hour.

Sjoberg says resourcefulness is an important trait for contact tracers, who sometimes must track down a contact based on little more than the name of the person. According to the Public Health Institute website, good critical thinking skills, verbal communication skills, and proficiency with computer software are among the qualifications an applicant must demonstrate. A high school diploma is required, though a community health worker certification may be substituted for a diploma.

Sara Rodgers typically works for SRHD as a research scientist in quality, planning, and assessment. Since March, however, Rodgers has been doing COVID-19 response work, including contact tracing.

Conversations with people who have tested positive for the virus are guided by a script, she says. After confirming the person’s date of birth and address, the tracer gauges their understanding of their test result.

“After that, we talk to them a little about their symptoms, where they believe they may have been exposed, and that segues into talking about their contacts and the people who live in their household,” Rodgers says.

Sjoberg says contacts are separated into two tiers: close contacts, such as roommates or someone who was within six feet of the infected person for more than 15 minutes; and potential exposure, such as someone who was in a restaurant at the same time as a person who has since tested positive for COVID-19.

Contact tracers ask for the information of those contacts when talking with a COVID-positive person in order to get in touch with those who might have been exposed, so that they can receive information about symptoms, testing, and quarantining.

Rodgers says that tracers sometimes have to go off-script in order to gain the information they seek more effectively.

“You really never know what you’re going to get when you call someone,” Rodgers says. “We don’t get a lot of people who are aggressive, but there are definitely people who don’t necessarily understand the process of doing case investigations and contact tracing, and they misinterpret our motives. The contact tracing is so that we can stop the spread of COVID and keep the community safe, but a lot of people need to have that explained to them.”

To build rapport, Rodgers says she tries to determine what’s important to the people she’s calling during their conversation and links those priorities to the importance of stopping the spread of the virus.

“Depending on what the person is thinking about, we like to talk about their friends and family and what we can do to keep them safe … then they’re more willing to give us that information,” Rodgers says.

Sjoberg says that contact tracing became more difficult in July, when the demographic of people testing positive for COVID-19 changed from older adults to those in their 20s and 30s.

“We got fewer named contacts for follow-up from positive cases,” Sjoberg says. “Our need for contact tracing actually went down because we were getting a lot less information about those contacts, I think mostly because of where exposures might have happened, in more social settings with a younger demographic.”

Rodgers says that in her experience, younger people are sometimes more reluctant to share information about contacts.

“They attend social events, where they might not even be able to name the people that they had close contact with,” Rodgers says. “We try to work with the cases in that situation. We accept that they might feel more comfortable giving that information to their friends than having someone from the health district call them and let them know that they need to quarantine. We try to get the information to them in whatever way possible.”