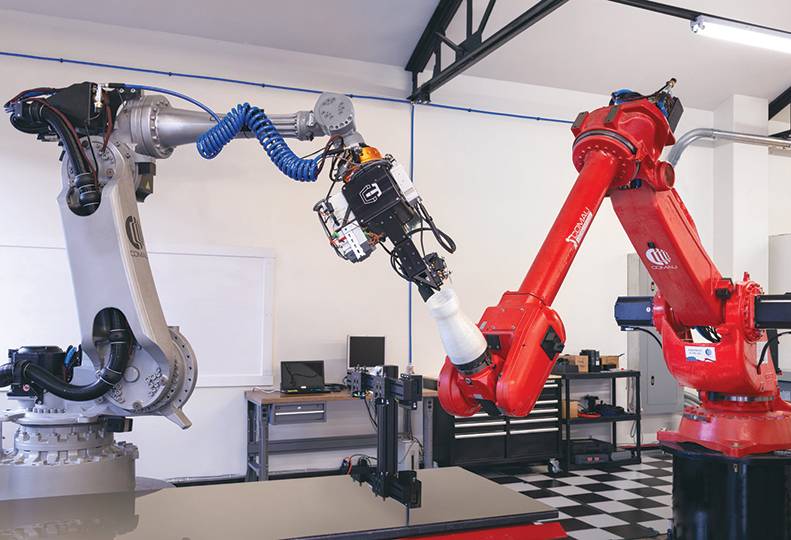 The 4-year-old company, located in 5,500 square feet of space at 215 E. Lakeside in downtown Coeur d’Alene, designs and manufactures robotic arms and 3D printing to build composite parts. In this process, strands of material, such as carbon fiber, fiberglass, and Kevlar, are layered on top of each other using a robotic arm, during which a resin is rapidly cured using ultraviolet light, eliminating the need for a mold or to bake the part in an autoclave for hours.

The company also can print using fiber optics, copper wire, and nichrome wire, which can be used to embed sensors, circuits, and heating, respectively, into composites during the printing process, according to its website.

He describes it as similar to computer-aided design software for Continuous Composites’ technology.

For the next 18 to 36 months, the company will be working with several leaders in industries such as aerospace, defense, automotive, and energy on nonrecurring engineering projects, Alvarado says.

“(They) basically pay us to focus our (research and development) efforts on their objectives with the idea that we’re maturing the technology with their specific use case,” he says.

The company, which currently has 22 employees, also is expected to nearly double its staff this year, says Alvarado, who projects that staff will grow to at least 40 employees by the end of the year in positions such as controls engineering, software engineering, mechanical engineering, and business development.

With that growth, the company also is expanding into an 8,250-square-foot facility next door in the former Northern Pacific Railroad warehouse, where it plans to install larger versions of its 3D printing machines for large-scale projects.

Within the space, 40-foot-long linear rails will be installed that will have two robots mounted on them that can travel along the rails to print composites up to 40 feet long by 20 feet across by 15 feet high.

Renovations on the warehouse should be finished within the next two months, he says, and then the company will begin landscaping the adjacent parking lot and convert the outdoor space into a courtyard for employees to enjoy, creating what he calls the “Continuous Composites campus.”

Alvarado and cofounder John Swallow also own McAlister Technical Services, an engineering and material manufacturing company in the material sciences industry. McAlister manufactures the end effectors — or the print heads — for the 3D fiber printing machine, which are designed by Continuous Composite engineers.

When the company first started, it hired a Washington, D.C.-based law firm to oversee its patent portfolio.

“Our foundational patents were our lifeline,” he says.

One of the patent attorneys eventually was hired on to Continuous Composites and relocated to the Coeur d’Alene area and now manages the company’s patent portfolio.

“One of the interesting things about our company is that it’s a very unsuspecting area for this kind of disruptive technology to be invented and to rooted in being developed … We really view this technology being able to change the lives of everyone involved,” he says.

Alvarado says it’s hard to determine where the company will go next but says in the near term — within the next 18 to 36 months — it will take its technology to market and begin selling its machines, as well as selling its software to companies as a service.

“You’re going to see our technology change drastically over the next 12 months,” he says.

Currently, a team is working on a new design for the end effectors, says Andy Stulc, mechanical engineer with Continuous Composites.

“Basically, the machine we’re building is made up of maybe five or six submachines, and right now all of those machines, they exist as independent machines in the world, and so we’re kind of taking multiple processes and putting them into the same head,” Stulc says.

Those processes include a resin impregnation process, an automated fiber placement machine, and a photopolymer curing machine — all of which normally exist on their own. The company is working on how to stack the processes on top of one another efficiently in a single machine, he says.

The company also plans to begin a Series A round of fundraising within the next two weeks, which will be used for the technology readiness level, Alvarado says. This is a standard set by NASA that qualifies how mature the technology is on a scale from one to nine, with nine being the most mature technology.

Alvarado declined to disclose how many funding rounds have been previously held, and how much the company has raised in funding.

Representatives of Continuous Composites also travelled to Paris in March to participate in the JEC Innovation Awards, which is the largest composite trade show in the world, Alvarado says.

“From the pool where they gather the three finalists (of each category), they said they get hundreds of applications in each category, so it’s a pretty big pool of talent,” Simon says.

The company ultimately took home the 2019 JEC Innovation Award in 3D Printing and was the only American company to win an award.

Tyler, Alvarado, and John Swallow, who is also president and CEO of Coeur d’Alene-based New Jersey Mining Co., officially launched the company in 2015 in the McAlister facility and moved it to its current location in 2016.