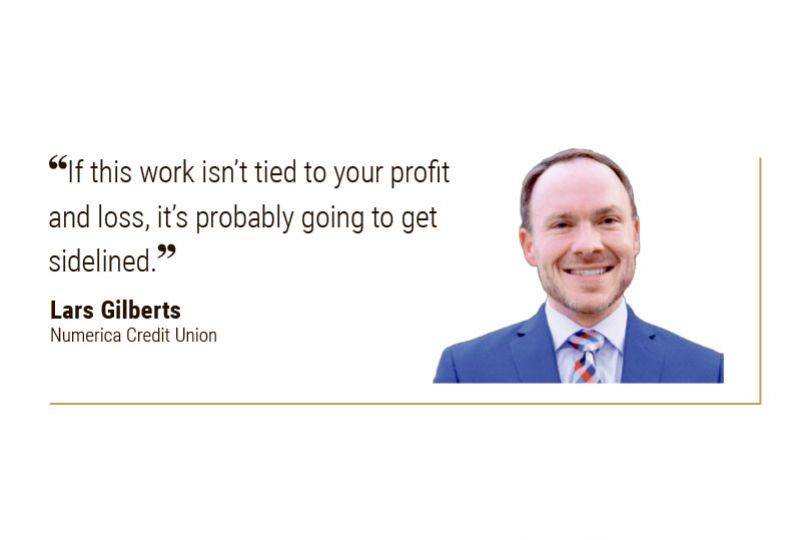 Businesses and nonprofits that implement diversity, equity, and inclusion practices should take steps to ensure that such principles are present throughout operations, some experts here say.

Blending DEI into every facet of an organization ensures that the work isn’t isolated to one person, one department, or a one-time event, says Lars Gilberts, vice president of equity and community development at Spokane Valley-based Numerica Credit Union.

Gilberts says it’s common for an employer to launch an initiative or new role that lacks teeth, leaving DEI principles to gather dust.

“If this work isn’t tied to your profit and loss, it’s probably going to get sidelined. It’ll be a pet project,” Gilberts says. “What I’ve seen in many well-meaning organizations is that this is limited to a moral conversation. For both businesses and institutions, this is both a moral and a business opportunity.”

In addition to diversity, equity, and inclusion, Gilberts says many people now include the concept of belonging and use the acronym DEIB.

Gilberts says having the buy-in and support of leadership is vital for blending DEI into an organization. DEI work is impotent without a culture that’s receptive to and supportive of DEI principles, he says, and the culture of a workplace is set by its leaders.

“The culture’s not going to change without the support of leadership,” Gilberts says.

Kitara Johnson-Jones, chief human resources officer at Excelsior Wellness, says it takes about three years to fully establish a DEI program or department. She says that the DEI work won’t be effective if it’s isolated to one person or team.

“Oftentimes, people will hire the (DEIB) person, but the culture is not conducive for that person to thrive,” Johnson-Jones says. “We often do DEIB as separate but equal. Because it’s separate, people think that it’s one office, not a part of everything you do. It needs to be a part of everything that you do.”

Josh Orozco, associate dean of diversity, equity, and inclusion at Whitworth University, says DEI initiatives see better success when leaders at the highest levels of an organization are engaged from the beginning.

Johnson-Jones says it’s incumbent on leaders to take responsibility for ensuring everyone is heard and to navigate conflict when it arises.

“It’s up to the leader to figure out what it takes to hear the voices of all personnel,” she says. “When there’s conflict, a lot of leaders avoid it. Conflict is not necessarily a bad thing, as long as it’s handled with civility.”

Johnson-Jones says that leaders should be aware of employee behaviors that can impede conversations about DEI principles, such as talking over other employees or dominating a conversation. When these problems come up, leaders can point to a company’s values and mission to explain how such behaviors aren’t conducive to the organization’s operations.

Leaders also can use tools to help them ensure equity, she says. At a meeting, for example, some people may not have had an opportunity to speak.

“Make sure you have a checklist of attendees so as you’re going through, you know who’s had an opportunity to share, and who has not,” Johnson-Jones says. “Know how to open up space to allow those who have not said much to be able to enter and inject their voice.”

Gilberts says that when some people are excluded from conversations, an organization can suffer tangible consequences.

“If we don’t create space for them to be able to step up, we’re not going to get that perspective, we’re not going to make as good of a decision, we’ll probably waste money, and we’ll miss opportunities,” he says. “When people aren’t heard, we all suffer.”

Johnson-Jones also suggests a score card for hiring, rather than subjective questions.

“Having a scorecard for interviews provides a balanced way of interviewing people based on points,” Johnson-Jones says.

A good way to collect information from employees regarding DEI topics is through employee surveys, she says.

Orozco recommends critical assessments for every department in an organization.

“We need to create and conduct regular assessments that help every unit within an organization understand their own identity. Who are we as individuals? Who are we as an organization? What’s our history and our culture like?” Orozco says. “Everybody should be asking themselves: How are we doing with the people we interact with?”

Johnson-Jones says that in planning training sessions specifically around DEI, many organizations become singularly focused on certain topics or types of training.

“It’s okay to have some trainings around bias, but it shouldn’t just be implicit bias,” she says.

Johnson-Jones says there are more than a dozen types of biases.

“Don’t just focus on unconscious bias or implicit bias; focus on all the biases. When you do that, it lets a lot of people realize that they, too, have biases—everyone has them,” she says. “It’s about being aware of them. If you only bring up one bias, people tend to reject that.”

Principles of DEI should be included in every type of training, she says.

Orozco says a collaborative approach involving employees and leaders at all levels can be helpful in establishing DEI initiatives.

Orozco says creating and fostering connections between employees has been key to his DEI work.

“I think about DEI as a way of trying to build a culture,” Orozco says. “Everybody … has a role to play in sustaining and fostering that culture.”

Johnson-Jones asserts that transparency from leadership is crucial in fostering an environment conducive to embracing DEI work. She uses pay increases as an example.

“Set clear standards for pay equity. (Present) the reasons why a person would get a pay increase and the process of considering internal candidates for promotions,” Johnson-Jones says. “Have set standards and adhere to them. Once those pathways are clear, you reduce bias, because people are going to know it’s transparent and what it takes to get to the next level.”

Gilberts says he’s seen transparency in action at Numerica. At the credit union’s regular all-staff, town hall meetings, every question submitted to leadership receives an answer, whether live or online after the event.

“I’ve seen our leaders get put on the spot with some challenging questions, but the culture is there that means that’s okay,” Gilberts says.

Flattening power structures within an organization also can help to break boundaries that are antithetical to DEI work, he says. For example, Numerica employees meet with their direct supervisor monthly, but Gilberts says the employee chooses the time, setting, and flow of the agenda for the meeting.