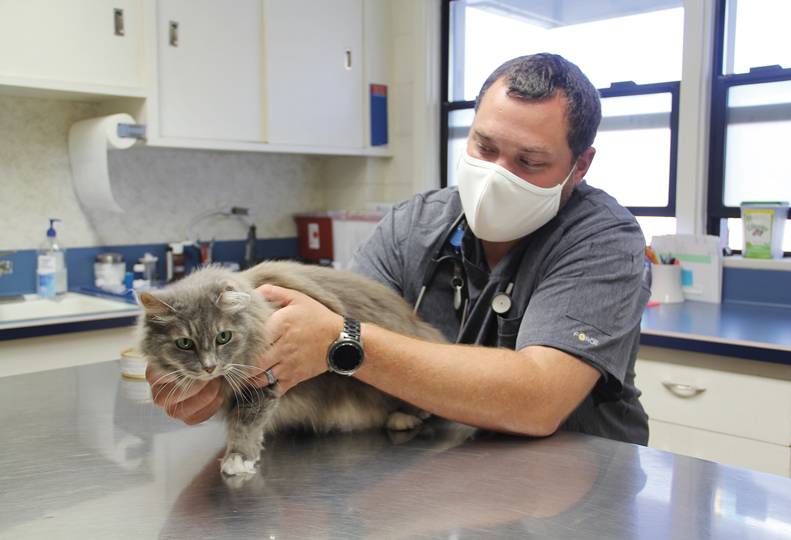 While the Inland Northwest health care industry is reporting millions in losses since the coronavirus outbreak, care providers who serve mankind’s four-legged friends are struggling to keep up with demand.

“There’s a lot of speculation as to why,” says Dr. Linsey Sutton, owner of Union Animal Hospital.

One theory is that more people are working from home—or just staying home more frequently—and paying more attention to their pets, which in turn is prompting more visits to Inland Northwest veterinary clinics.

While there’s no direct correlation between COVID-19 and broken bones in pets, the difference now is that if a dog is hit by a car, for example, an owner is more likely to notice and find the pet before it dies.

In the first 25 days in August, the Union Animal Hospital saw 99 new clients and had 833 patient visits. In all of April, the clinic saw 86 new patients, and 800 patient visits total, she says.

When the clinic, located at 2225 E. Sprague, resumed full staffing in June, after a few weeks of staggering shifts, the clinic saw 114 new patients and had over 1,085 patient visits, she says, up considerably from the year prior.

Union was established five years ago, Sutton says, and has seen consistent increases in revenue year over year since its inception. Revenue for the clinic dropped in April, she says, but increased 20% between June and July and is on track to exceed 2019 revenue, she says.

Dr. Matt Schmidt, a veterinarian at the Animal Clinic of Spokane PS, says the clinic has seen a spike in gross revenue following an initial 3% drop in April.

Schmidt says revenue peaked in June with a 30% increase compared with June 2019 figures. Revenue rose 15% in May, compared with the year-earlier month, while July revenue was up 25%.

The clinic, however, saw a modest dip in August, with a 10% decrease in gross revenue, he says.

Similar to Sutton’s observations, Schmidt notes, “People are home. They’re wanting to know why that dog is doing this or what is that lump. They have time.”

The Animal Clinic of Spokane, located at 6322 N. Wall, has seen a large spike in demand for diagnostic services and requests for de-wormers, bloodwork, and X-rays have increased, he explains.

The increased demand for services isn’t confined to the Spokane area.

Volume and revenue are up at animal hospitals and primary-care veterinary offices across the U.S., according to VetSuccess, a provider of data-driven information for veterinary practices. VetSuccess tracks financial data from over 2,800 clinics and estimates nationwide average revenue was up 6% year-to-date through Aug. 29, compared with the year-earlier period.

In its most recent earnings report, pet health insurer Trupanion announced its second-quarter revenue was up 28% over the year-earlier quarter, and the company had 14% more cat and dog members than it did at the start of the year.

Second quarter enrollment was up 29% compared with the enrollment in Q2 2019, Trupanion reports.

Dr. Mark Schrag, co-owner of Hunter Veterinary Clinic, just north of downtown Spokane, attributes some of the increase in demand to an influx of people into the area.

Schrag says he noticed that starting roughly two years ago, and demand has been increasing steadily since, though Hunter Veterinary Clinic did see a large spike in demand in late March.

“I’m amazed how many phone calls we get,” he says of people looking for pet care who already have been turned away by other local clinics.

Daily call volumes have doubled, with receptionists at the clinic fielding a little over 1,200 calls a day, compared to the previous average of 500 to 600 day, Schrag says.

“Unfortunately, with the introduction of COVID, we’re not able to expand as much as we would like to meet everybody’s demands because every appointment is taking longer,” he says.

Schrag estimates the clinic is averaging about 10% more time per patient, and 10% more new patients overall.

He adds, “We’re turning away more people than I would like to turn away every day just because we can’t physically send more people in.”

Up to 90% of patients seen at Hunter are cats and dogs, he adds, while the rest are exotics. On average, a single vet at the clinic will see between 20 and 25 patients a day, he says. Despite an increase in demand, Schrag says that number of patients seen per doctor actually decreased a little, as the clinic limited the number of people coming in a day and added time between appointments.

The clinic has 18 employees, three of whom are licensed veterinarians, and six of whom are veterinary assistants.

It also has a clinic cat, Vinni, short for Vanessa van Gogh, and a dog, Zara.

The clinics have had to make several adjustments to accommodate reopening procedures.

Sutton says Union Animal Hospital, like most area animal clinics, has shifted to curbside drop-off and pickup. The clinic now schedules an extra 10 minutes per patient visit to allow time for cleaning, pet drop-off and pickup, and conversations with owners.

“We went to curbside pretty quick,” she says. “We tried to save the staff from exposure so we actually split the staff into two teams” where one team would work on certain days and the other would work on the alternating days.

Schmidt says curbside options have led to increased efficiency at Animal Clinic of Spokane and have enabled the clinic to increase the number of patients it can see a day. On average, the clinic has seen over 50 patients a day over the summer months, he says.

“Before, we were limited to the number of exam rooms we had,” he says. “Now we have 15 parking spots so we can do more.”

Schrag says Hunter Veterinary Clinic also has shifted to curbside only drop-off and pickup. In addition, the clinic also shifted operations to reduce wait times for its walk-in and urgent care options, though he notes those changes occurred in January before the pandemic hit.

In January, Schrag says the clinic hosted walk-in appointments every afternoon and urgent care hours on the weekend, but wait times were 3 1/2 to four hours. The clinic has since shifted to a same-day urgent care setup, similar to urgent care clinics for humans. Patients can request spots online, he says, which has cut wait times to an average of about 30 minutes to an hour.

With animal shelters also having to adapt to pandemic-induced restrictions, an unmet demand for pets has developed.

Shelters across the country are reportedly emptied out due to high demand and a decrease in animals being brought in. Shelter Animals Count, which tracks adoption data from nearly 2,600 animal shelters and rescue organizations estimates a 26.7% decrease in adoptions through July 31 this year, compared with the year-earlier period, though that is largely attributed to fewer strays coming into their care.

Data for Spokane County shows adoptions fell 47.6%, with a total of 2,670 adoptions through July 31 this year, compared with 5,099 adoptions in the year-earlier period. The data for 2019 includes counts from the Spokane County Regional Animal Protection Service, known as SCRAPS, the Spokane Humane Society, and SpokAnimal. The 2020 data only includes numbers from Spokane Humane Society and SpokAnimal.

Overall, data shows animals are being adopted at a faster rate than they are coming into the shelters.

The trend is also reflected at the state level, with adoptions down 35%.

Edward Boks, executive director of Spokane Humane Society, says adoptions are currently down 4% compared with last year, but intakes at the shelter are down 12%, meaning fewer people are surrendering their pets.

Boks says the shelter saw a steep decline in both surrenders and adoptions when the pandemic hit, and the shelter was forced to close its doors to the public and conduct adoptions by appointment only. It reopened its doors about four weeks ago, and adoptions have been trending upward rapidly since then, he says.

He adds at the current rates, the Spokane Humane Society is on track to have a record-breaking year of adoptions.

One looming concern is whether a potential boom in housing evictions due to the pandemic-induced economic recession will overwhelm the local shelters, he says. When evictions increase, the number of animals being abandoned or relinquished spikes, he explains.

Boks, who ran an animal shelter in Los Angeles in 2008, says the shelter was overwhelmed with abandoned animals when evictions spiked during the last recession.

“I suspect we’re going to see a drop,” she contends, adding that when the pandemic first hit, the impression was that it would be a few months of shutdown and then life would resume as usual.

“We’re starting to figure out that may not be the case,” she says.

Now, with Congress stalled on its next relief package and the pandemic still in full swing, people likely will pull back on what are considered discretionary services, she says.

Sutton adds, “We’re buffering for that.”