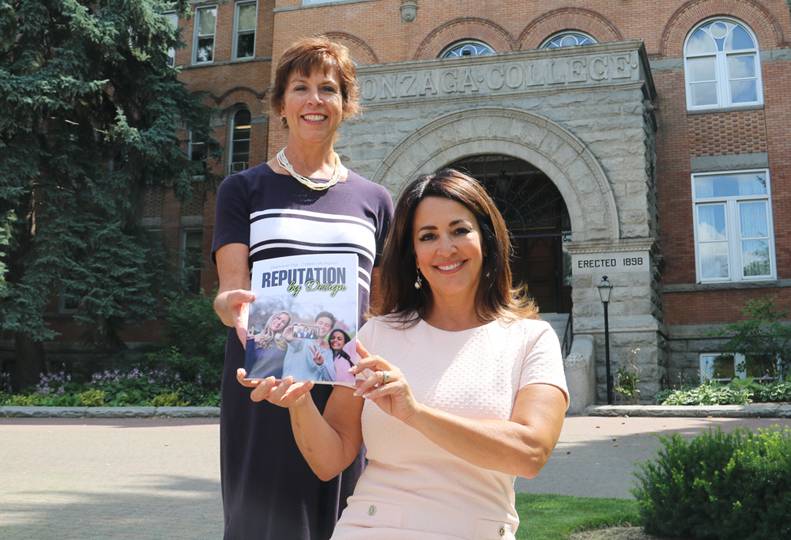 “Those with a good reputation, who are known for being dependable and trustworthy, have created that status through repetition,” says Vigil. “And it’s a successful formula that we believe can be taught to everyone.”

Vigil, a news anchor with KHQ-TV, and McMahon, an associate professor of integrated media at Gonzaga University, are the co-authors of a new book titled “Reputation by Design.” Published through Iowa-based publisher Kendall Hunt Publishing Co., the book was released July 19.

Vigil has been a news anchor with KHQ-TV for 22 years. In 2013, she completed a master’s degree in communications and leadership from Gonzaga University, after which she began teaching part time at the business school.

Vigil says the book is based off material from the course she teaches at Gonzaga, which is called Image and Reputation Management.

“I wanted to design a class they didn’t have yet,” says Vigil. “It turned out to be an instant hit with my students, and they suggested this was material that needed to be taught to a larger audience.”

McMahon, who has been an associate professor of integrated media at Gonzaga for 33 years, befriended Vigil while Vigil was job shadowing as her teacher’s assistant.

McMahon, who is already the author of two textbooks of her own, agreed to help with additional research and writing to craft the material into a book.

“I knew if we put our heads together, with her creative ideas from the course and my writing and research abilities, we could make something pretty fantastic,” she says. “We started gathering materials in 2015 and finally completed it this year.”

McMahon and Vigil say the book encourages readers to consider how they’re presenting themselves both online and in the real world. It includes research and theories of how cultivating a good reputation can lead to more fulfilling relationships, as well as true stories from people in the Spokane community.

“I always ask my students for examples of people they admire, and usually it’s someone older who’s proven themselves to be both kind and dependable,” Vigil says. “No one ever says they admire someone for the amount of money they make. It’s always that they’re a steady, reliable presence, and that’s something money can’t buy.”

McMahon says the book begins by asking readers to consider their values, as well as how they view themselves.

“We ask them to consider whether they truly practice what they say and are who they say they are,” she says.

Adds Vigil, “It’s about being able to recognize how self-image, or even words others have used to describe you have helped or hurt, and how you’re carrying that within your everyday life. We want people to be able to have more control over what they’re putting out there.”

In addition to values and self-esteem, the co-authors say their book also contains chapters about the importance of effective communication, social media, gratitude, volunteerism, and even repairing a damaged reputation.

“We talk about how different generations communicate differently and often miscommunicate,” says Vigil. “We also talk a lot about social media and how online profiles can hurt one’s relationships, health, and well-being.”

McMahon adds, “We talk about the importance of thanking people who have helped you and shaped you along the way. We also ask readers to consider disconnecting from the online world and volunteering because connecting with people and sharing our time has proven health benefits.”

Vigil says the book’s final chapter challenges readers to set goals and write them down, with the intent to work toward achieving them.

“One of the things successful people do is to set goals and actively work toward them,” she says. “When you do that, you feel proud of your accomplishments and the experiences and interactions that have shaped you along the way.”

Vigil and McMahon say that in reading the book, they hope audiences will learn something about themselves and feel inspired to make positive changes.

Vigil recommends the book for anyone asking why they’re being passed over or why their relationships fail.

“It’s never too late or too early to develop a good reputation,” she says.

“It’s about understanding your values and how you view yourself, then thinking through how you choose to communicate that to others,” she says.

The book includes exercises and activities at the end of each chapter, so it can be used individually or in the classroom, says McMahon.

“The material is backed by some research, but it’s not a hard read, and there are lots of photos and quotes,” she says.

Looking ahead, McMahon and Vigil say they’re already gathering materials for a second edition of the book.

Both McMahon and Vigil plan to use the book in the courses they teach.

“We’ve talked about possibly using the material to do some training and consulting events in the community, and that’s a future avenue we’d love to take,” McMahon says.

Copies are available at the Kendall Hunt website, the Gonzaga University campus bookstore, Auntie’s Bookstore, Barnes & Noble, and Amazon.com. The co-authors say they also hope to arrange an official book-release event in Spokane later this month.