Mixed-use building slated along south side of I-90 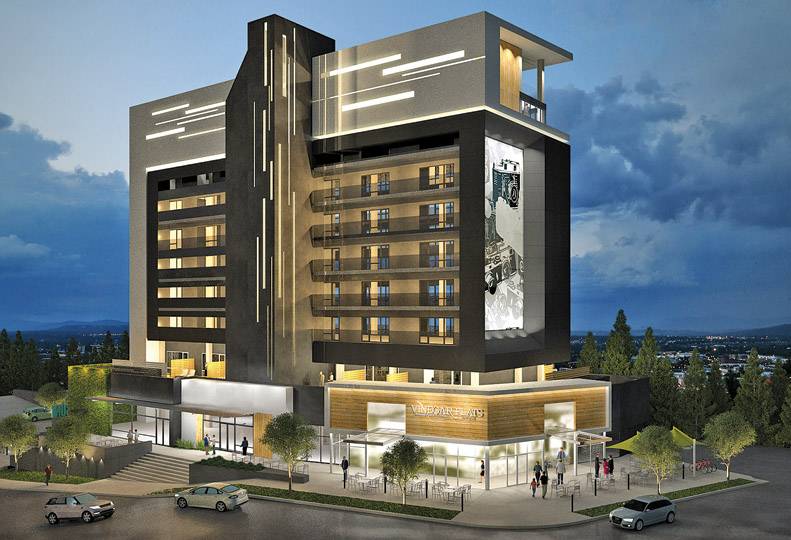 -—Hurtado|Hissong Design Group
The proposed development pictured here would be constructed on the lower South Hill and would include commercial space on the ground level, with living units above it.

The developers for a proposed seven-story, $12 million mixed-use building that would be located on the lower South Hill intend to break ground this year.

The development has been named the Vinegar Flats Public Market. It would be developed on a vacant site at 2020 W. Seventh, which is uphill and east of the intersection of Seventh Avenue and Inland Empire Way and visible along the south side of Interstate 90.

In October, the Spokane-based architectural firm Hurtado|Hissong Design Group LLC submitted plans to the city to develop the site. The firm’s co-owner, Armando Hurtado, said then that the development team hoped to begin construction as early as April or May of this year, with completion in 12 to 16 months.

However, that time frame has been changed. For now, a groundbreaking date isn’t set, and the project’s timeline for completion is now 24 months, says Josh Hissong, who co-owns HDG with Hurtado. Baker Construction & Development Inc., of Spokane, has been chosen as the project’s general contractor, while DCI Engineers Inc. will serve as the project’s structural and engineering firm, Hissong says.

Though the time frame has changed, the direction of the project has stayed the same. Developers want to create a culturally and residentially diverse building that serves as a gateway point to downtown Spokane.

As envisioned, a first-floor food court with ethnic restaurants would be on part of the first floor, Hurtado says. The main level would have 11,800 square feet of commercial space.

Plans call for a total of 52 living units on the second through seventh floors, and 21 one-bedroom units would be designated as housing for international exchange students.

“Our current design has units ranging from 300 square feet to 2,500 square feet, and the prices will be based on the going rates at the time of completion,” he says.

As envisioned, restaurant spaces would range in size from 300 to 1,000 square feet. Other retail and commercial spaces also are designated for the first level, Hurtado says.

Spokane business owners Namva Chan and her nephew, Jonathan Chan, have spearheaded the project and continue to seek investors in it. The Chans, Hissong, and Hurtado met with city officials on Monday to discuss a city easement at the site.

“We briefly entertained the possibility of a different site because of a previously unknown easement discovered by the city of Spokane in our parking area, which was an issue that has since been resolved,” Hissong says. “No other sites are being considered. We love our site.”

Jonathan Chan says, “We want to bring youth, energy, excitement and cultural diversity to downtown Spokane. We are hoping that a successful EB-5 development will lead to additional projects, new sources of capital investments, and create new jobs for our community. Our project has the potential to brand Spokane to a larger international audience.”

Through the EB-5 program, a foreign investor can invest in a limited partnership that develops a large project for the prospect of securing U.S. citizenship. EB-5 funds are expected to be just one of the sources of financing for the project, Chan says.

“We are also looking to local entrepreneurs and institutional investors as possible sources of funding. A few of our investors are citizens of China. However, we are not limited to investors from China,” he says.

“This investment opportunity is available to anyone who meets the requisites. But again we stress that this is a local project with a mixture of both local and international funding, with the end goal of stimulating the Spokane economy and creating jobs,” Chan says.

Says Hissong, “We are excited about this for many reasons, one of which is the style of the building is very contemporary and has a very clean and simple material palette.”