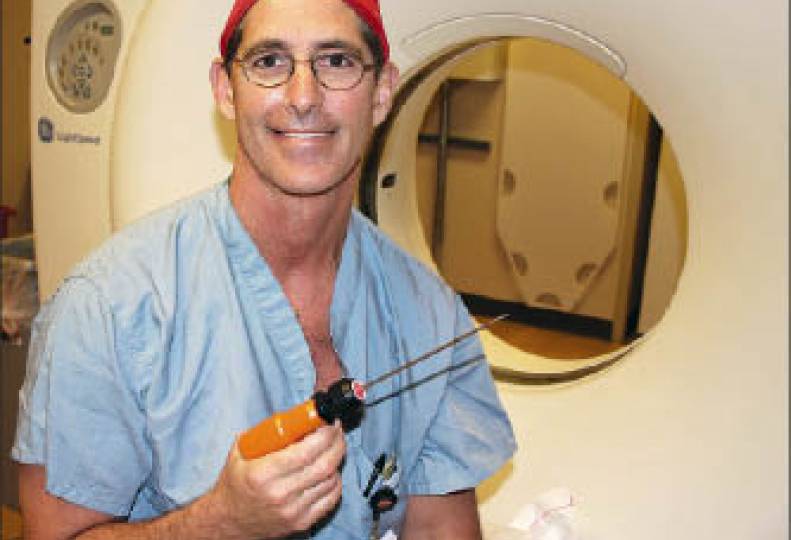 The new equipment, called the OnControl system, also is being looked at here as a potential way to help cement fractured bones, and has other possible applications that its maker, Vidacare Corp., of Shivano, Texas, will continue to study, says Dr. Ken Symington, an interventional radiologist at Inland. Symington and his colleague, Dr. Jason Brower, and four other doctors at Inland have been trained to use the system, which is applied in conjunction with computed tomography (CT) imaging.

Symington says the FDA-approved OnControl Biopsy system was introduced into the marketplace about a month ago.

He says that until now, the way bone-marrow biopsies have been collected hasn't changed substantially in about 50 years.

A conventional biopsy, which is done to diagnose potential bone disease, is performed by inserting a needle, which is surrounded by a sheath, through a patient's soft tissue and into a bone, commonly the hip, femur, or spine, Symington says. Once the needle-lined sheath reaches the bone, a doctor pushes the needle manually into the bone using a rotating motion similar to driving a screw, until it pierces through the hard outer covering of the bone. Once the needle is inside the bone, the needle is pulled back through the sheath, and the sheath is driven further into the bone, essentially taking a core sample several centimeters deep. The sheath then is removed, bringing with it the collected bone biopsy, which then can be tested at a lab for cancer, osteoporosis, or other disorders, he says.

The 20-minute procedure is laborious and sometimes involves the doctor exerting a lot of force on the patient, Symington says.

"Sometimes we have to buttress a patient so they don't get pushed off the edge of the table," he says.

That method also can fatigue the muscles of the doctor performing the procedure, making it more difficult for him or her to control placement of the instrument and increasing the danger of injuring the patient.

"When we use our big muscles to do this, it's less precise," Symington says.

The OnControl equipment, by contrast, allows the procedure to be done faster and with less force, because it uses a small, battery-powered hand drill to insert the same type of needle and sheath through the patient's soft tissue and into the bone, he says. The drill produces a higher rpm rotation than can be achieved with human force, and that spin allows the needle and sheath to enter the bone more easily.

The hand drill snaps easily on and off the end of the needle-sheath combination, so once the bone is pierced, the doctor disengages the drill and removes the needle from the sheath. He then reattaches the drill, checks the sheath's position with CT imaging, and with the drill drives the sheath into the bone to the depth required for the sample. The sample then is pulled out in the same smooth motion by withdrawing the sheath from the patient while the motor continues to rotate it.

"We call it the one-minute biopsy," he says.

He says the new equipment likely will make it easier for female doctors to perform bone biopsies, because the equipment requires less strength to use, which has sometimes been an issue for some women physicians who don't do bone biopsies because of the strength they require.

The new system also reduces damage to the edges of the biopsy sample, making it a better sample for diagnosing disorders such as cancer, aplastic anemia, or osteoporosis, he says.

In some cases, where the surface of the patient's bone has been softened or destroyed prior to the biopsy, the OnControl method isn't necessary because it's easy to insert a biopsy needle, but in general, Symington says, the OnControl system is less expensive for hospitals and doctors than the conventional procedure, because it's much faster. Insurance companies, he says, are billed by procedure, rather than by the time it takes to do biopsies, so the cost is the same for the patient, though the procedure involves less discomfort, Symington says.

For the facility, Vidacare provides the drill at no charge, and sells the single-use biopsy collection kits, which include the needle, sheath, and a small rod to push out the collected sample onto a slide for examination, for between $100 and $200, depending on the length of the needle and sheath, Symington says.

He says the biopsy procedure doesn't have to be done in connection with CT imaging for visual guidance, and rather could be done using fluoroscopy, which is a series of X-rays, or without any imaging technology when the needle is very short.

Though only recently released for use as a biopsy tool, the battery-powered drill has been used in other settings for about two years, says Symington.

For instance, emergency responders, in situations where time is short or a person's veins can't easily be accessed, have been using it to provide an alternative to inserting a needle manually into a person's vein to give intravenous medication or fluids, Symington says. He says about half the ambulances in the country are equipped with the device for that reason.

Also, Symington says that while using a shorter needle with the same system, a doctor can drill a hole into the bone, in what's called the intraosseus space, where fluids can be introduced directly into the bone marrow to rehydrate a person. The equipment is used in the field by the military, because it is quick to use and causes less blood loss than with a conventional IV, the company says.

Symington says there could be other useful applications of the tool, and says Brower currently is participating in a study of one such use, as an orthopedic aid. In that study, the OnControl system is being used to cement and strengthen fractured bones in orthopedic interventional procedures, Symington says.

Additionally, in the future it's possible that the device could be used as a way to inject cement into a bone to help attach prosthetic hip replacements to the bone, or to collect stem cells from bone marrow for research.

"It's a way to get access to bones that are intact," Symington says.