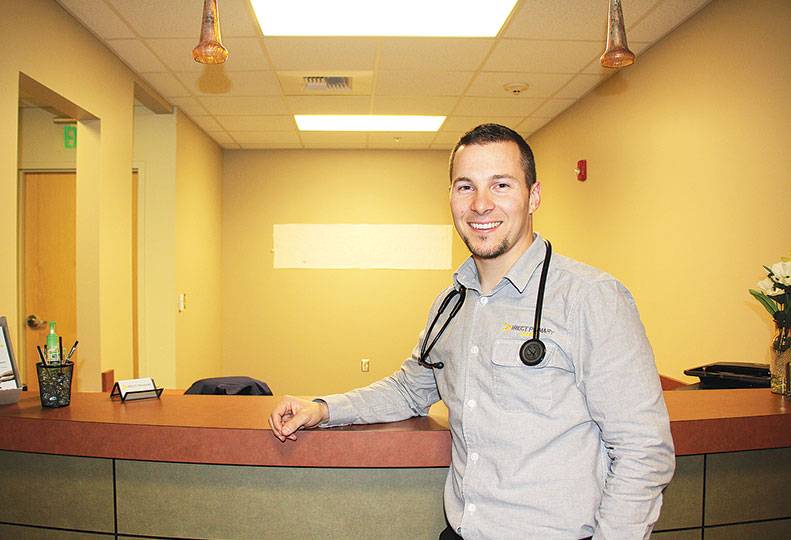 -—Virginia Thomas
Matt Dinsmore, founder of Direct Primary Care LLC, is one of two practitioners who work at the clinic, located on the Holy Family Hospital campus, on Spokane’s North Side.

Matt Dinsmore says he became dissatisfied with the prevailing medical care model after several years of working in health care.

Direct Primary Care is based on the model from which the clinic takes its name, Dinsmore says.

For a monthly membership fee, patients have access to primary care services, such as diagnostic examinations and preventive care.

“What we don’t cover is anything not done in this clinic,” says Dinsmore, who is CEO of Direct Primary Care.

The clinic doesn’t bill insurance, which was one of the main draws of the direct primary care model, he says.

“Originally, it (came) from frustration in seeing a lot of physician burnout, in seeing a lot of care that was suffering because of insurance regulations,” Dinsmore says. “Especially as you get older and you see the doctor more, you begin to realize there’s always a third person in the room, and that’s your insurance company.”

Dinsmore, an advanced registered nurse practitioner, opened the Direct Primary Care clinic in the Central Medical Office Building at 212 E. Central, on the campus of Providence Holy Family Hospital, at the beginning of November. He says about 20 people have joined the clinic since then. The clinic has two providers, who are also the clinic’s only employees.

“It’s not insurance, it’s a cooperative bill-sharing program,” he says. “Those big bills that can sink you, put you in debt, and send you to bankruptcy—the number one reason for bankruptcy is medical debt. (Sedera) helps cover those major medical costs. The things they don’t cover are preventive care services, which is 70 to 90 percent of the care you’ll ever need in your lifetime.”

Sedera has its own membership fees separate from Direct Primary Care, but Dinsmore says the clinic and the network use the same billing software, Hint Health, so patients can receive all their medical bills in the same place. Because Sedera isn't a health insurance company, members are subject to penalties associated with the individual mandate portion of the Affordable Care Act.

Direct Primary Care members are billed each month based on their age group. At the low end of the scale, patients who are newborns through age 26, the monthly fee is $29. For patients ages 60 to 64, the fee is $109. A family can sign up for $200 a month. Patients older than 65 are currently not accepted, Dinsmore says, because that population is expected to use Medicare.

Dinsmore says Direct Primary Care negotiates for services such as imaging and lab tests and helps patients to negotiate for specialist services, such as obstetrical care. He claims that Direct Primary Care acts almost like an insurance company in these cases, but without the paperwork and extra steps.

“Sometimes providers will (say) ‘to not have to deal with that headache, I’ll knock 25 percent off,’” Dinsmore contends.

One of the benefits patients are often most excited about, Dinsmore says, is the low prices for prescriptions that Direct Primary Care offers.

He claims patients can see discounts as much as 80 to 90 percent.

“We have a wholesale med supplier that has about 70 to 80 percent of the most common meds, and they supply to us and they do the same with other pharmacies, but other pharmacies will upcharge or bill insurance reimbursed prices,” Dinsmore says.

He says that patients with Direct Primary Care pay slightly more than wholesale prices for their medications.

Dinsmore says patients can also enjoy 24/7 access to providers through Spruce, a digital health care platform that enables patients and providers to communicate via text or email, after they’ve completed one in-person office visit.

“The reason why we have that face-to-face visit is that it’s hard to provide telemedicine services to someone we’ve never seen before; it becomes a patient safety issue,” he says. “Once we get that into the system, then they’re free to come in unlimited times without copayments, with same-day and next-day availability for sicknesses or injuries. We want to see people, but we don’t want to burden people, either. We don’t want them coming in for no reason.”

Dinsmore and one other provider, Dr. Barry Bacon, are currently the only providers and employees at the clinic.

“Our next hire we want to be a female provider to provide services for our female members, but we need to become financially sound to get to that point,” he says. “It takes about 200 (members) to be doing well.”

Even if Direct Primary Care’s membership explodes in popularity, Dinsmore says the clinic will remain lean in terms of hiring staff and providers. Because the clinic doesn’t bill insurance, fewer employees are needed.

“We’re not doing the prior authorizations, we’re not doing all the administration stuff,” Dinsmore says. “The providers are doing all the nursing care, essentially. They’re bringing the patient back, they’re doing a social history, they’re doing the vitals. We like the fact that providers are involved in every step of the care. Anytime somebody’s touching a patient, it’s a provider.”

Dinsmore says he and Bacon initially met a few years ago through a community health center that serves northeast Washington, where Bacon helped to train Dinsmore.

“I knew enough about him to know his heart,” Dinsmore says. “He does medical missions and is just a soft-spoken, kind provider who serves the underserved. When I was thinking about this practice and the potential for who we could serve and benefit, he came to mind. I gave him a cold call. And he said yes.”

“For him, the benefit is that he can see how it’s done, how well does it run, how does it feel to be a provider in this type of model,” Dinsmore says.

According to the Washington state Office of the Insurance Commissioner, there are more than 40 direct primary health care practices in the state, including four in Spokane.

Dinsmore says the direct primary care model has experienced steady growth since a trio of providers pioneered the model in the Seattle area around 2007, largely due to increasing insurance premiums causing people to look for alternatives, and state and federal governments have begun to notice.

Dinsmore says that the concept of direct primary care is often hard for people used to the insurance model to understand.

“I’m in the medical field and it probably took me six weeks to feel like I could … explain it to someone else,” he says. “

He says many, including providers, mistakenly believe that direct primary care is another form of concierge medicine, in which a provider sees a select number of insured patients who keep the provider on retainer.

“It’s slightly offensive, because we’re not fleecing people. We’re not treating rich people. We’re treating people who sometimes don’t have insurance,” Dinsmore says. “Some of our marketing sometimes has to say concierge, because that’s what people understand. Concierge services without the concierge price is what we’re going for.”

Dinsmore asserts that pairing medical cost-sharing networks like Sedera with direct primary care providers can save employers a great deal of money, and they potentially could see claims decrease by 10 to 20 percent.

“Seeing how much employers spend on insurance is crazy,” Dinsmore says. “Potentially, a company that’s going with Sedera and Direct Primary Care, we could save them probably $60,000 for 27 employees.”