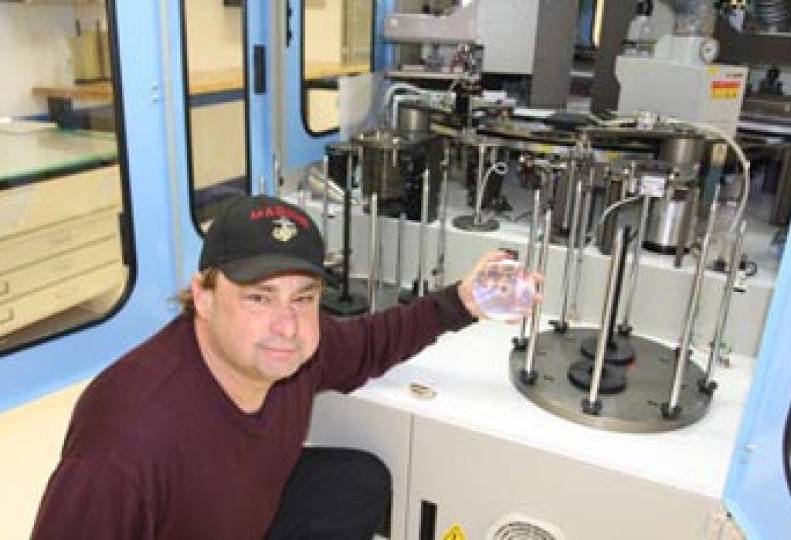 Erick Hansen, pictured in this file photo next to a high-speed disc printing machine, remains confident that BlueStar will begin shipping discs shortly.

Wells Construction Inc., of Spokane, has won a $280,000 default judgment against BlueStar President and CEO Erick Hansen in Spokane County Superior Court for remodeling work it performed in the Commercial Building, at 1119 W. First, where BlueStar is based.

Wells claimed in its lawsuit that Hansen and a now dissolved company he headed named Pacific First West LLC, which had owned the property, failed to pay it for work it did there, despite repeated demands. Court Commissioner Royce H. Moe awarded the construction company the default judgment last month after BlueStar failed to respond to the suit.

Also last month, to settle a securities fraud case in Los Angeles County Superior Court, BlueStar, Hansen, and two associates agreed to offer full refunds to all California residents who invested in the company, plus pay 10.5 percent of the original investment amount, unless they decline the offers. Additionally, although the settlement didn't require an admission of wrongdoing, the defendants agreed to pay $50,000 in civil penalties and to refrain from selling securities in the state unlawfully.

The total amount of restitution to be paid through the refund offers is expected to be determined this month, and the payments are to be stretched out over five equal quarterly periods beginning Jan. 31, the settlement says. The civil penalties must be paid within 30 days of the final restitution payment, or by April 30, 2010. The California lawsuit, filed by the state's corporations commissioner, alleged that defendants had raised at least $4 million through the unlawful sale of securities.

The two suits are among several that have been filed against BlueStar and Hansen. Since arriving here two years ago, the privately held company has been working to set up, and secure customers for, a plant downtown that it had hoped would employ as many as 120 people and would be producing and distributing 100,000 discs a day by now, but that instead has been plagued by problems and delays. Blu-ray discs are high-definition DVDs that use a proprietary format.

Reached late last week, Hansen said he has been out of town and was unaware of the Wells Construction judgment, but denied any wrongdoing and vowed to overturn the judgment, saying, "We're going to cite that they made a lot of mistakes."

He declined to comment generally on the settlement agreement with the state of California, saying the document speaks for itself, but insisted that it hasn't shaken BlueStar's viability nor decimated its financial resources.

"I still have enough to buy your freakin' paper," he says. "We're actually making discs now and doing what we said we would do, against all odds. We expect to be shipping jobs by the end of the month."

Complaining about the litigation, adverse publicity, and other obstacles that he believes have hindered the company unfairly, Hansen says, "We're trying to do something good in Spokane, but I can tell you it's very, very tough. I believe we will overcome, and we will again be victorious, and Spokane will."

Hansen says he changed the names partly at the urging of the Blu-ray Disc Association. The association, which is owned by a consortium of large consumer-electronics companies, licenses the Blu-ray format.

"They felt it was a little confusing (for the company to be using the word BlueRay in its name), and we agreed," he says.

One of the other lawsuits still pending against Hansen and BlueStar was filed last year by a Spokane electrical contractor, Arc Electric & Lighting Corp., which claims it's owed nearly $82,000 for unpaid work. Former Chief Financial Officer Yelena Simonyan, an investor in BlueRay, filed suit against the company early last year, alleging she had invested $100,000 in it, but that BlueRay hadn't provided full financial records she had requested.

Separately, a Texas investor contacted the Journal of Business late last year, asserting he hasn't seen any return from a sizable sum of money he loaned to Hansen and BlueStar, nor been able to get satisfactory answers from company representatives to his questions.

Also still pending is a lawsuit filed against Pacific First West, the company through which BlueRay bought its building on First Avenue. That suit was filed by two people who formerly lived with other low-income tenants on the top two floors of the three-story Commercial Building who claim they weren't given a year's eviction notice as required by state and federal law. The two former tenants, aided by the Spokane-based Center for Justice nonprofit legal organization, are seeking to force BlueStar to provide subsidized housing and pay other damages.

BlueRay moved to Spokane from the Los Angeles area in early 2007, but wasn't able to secure a certificate of occupancy for the plant at the Commercial Building until four months ago, after it finally demonstrated to city building officials that it had corrected electrical deficiencies. Technically, BlueRay wasn't allowed to begin operating there until it received that certificate.

Additionally, a past-due city utility bill at the Commercial Building reached a high of $4,946 in September of last year, but since then has been paid in full, according to public records that identify the address but not the property owner.

In the suit filed by the state of California, where BlueRay was founded three years ago, the corporations commissioner alleged that Hansen and two associates lied or omitted facts while selling unauthorized securities to at least 12 California investors over an extended period beginning in October 2006. The lawsuit asserted that the defendants, among other things, failed to tell potential investors that the state of California had served Hansen with two cease-and-refrain orders in 1999 for similar securities law violations and was violating those orders by approaching them for money.