Business improvement district would be expanded under city’s current proposal 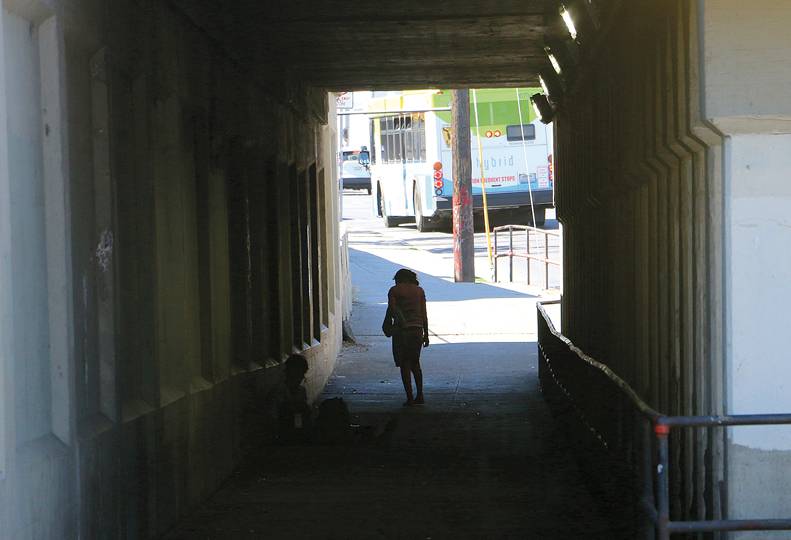 -Kevin Blocker
Downtown Spokane Partnership’s staff could be monitoring railroad viaducts, like the one shown here at Browne Street, in the near future.

(Updated 9:15 a.m. Pacific 7/2/2021 to clarify process through which a business improvement can be expanded.)

City officials are asking the Downtown Spokane Partnership to take on the added responsibility of providing cleanup and safety services south of the railroad viaduct in the city’s core.

The pending expansion to the downtown Business Improvement District is part of the negotiation for a five-year renewal of the DSP’s contract to manage the district. That new contract could be finalized as early as later this month.

Supporters of the expansion, which would involve extending the district’s current southernmost border from the BNSF Railway Co. line that cuts through downtown southward to Fourth Avenue, say doing so could help attract future business development to an area not technically considered a part of downtown.

“Downtown is the city’s living room,” says Spokane City Councilwoman Lori Kinnear. “It’s Spokane’s economic engine. I believe if we can bring the same services provided by the BID to the areas south of downtown, it could spur even more economic development.”

Established in 1995, the DSP is a nonprofit organization that advocates for the district and provides additional services to businesses in the city’s core, such as cleanup, safety measures, and marketing initiatives.

Under the terms of the BID, business owners within the district agree to a self-imposed tax that funds expanded beautification services and improvements to existing municipal services. Among the most recognized features of those additional services are the Downtown Spokane Clean Team and the Downtown Security Ambassadors.

Currently, more than 850 business owners and 350 property parcels are located within the 80-block district area, according to the DSP.

Expansion of the improvement district can occur by a vote of the City Council after a petition is signed and submitted by property and business owners representing 60% of the assessable value in the identified area, according to DSP, though the Council also can vote to expand the BID without approval from property owners.

Downtown Spokane Partnership President and CEO Mark Richard referred inquiries from the Journal about negotiations with the city to DSP board Chairman Roy Koegen, who is representing the organization through the process.

Currently there are seven full-time ambassadors and five Clean Team members. One supervisor oversees both units.

“There’s clearly been an expressed desire to move the BID boundary south to include the viaducts underneath the freeways from Maple (Street) to the west and Division (Street) to the east,” says Koegen.

He adds, “The city wants us to do several additional things and we’ve agreed to them. We’ve had a variety of communications with the City Council and its working group and anticipate having (a contract) completed soon,” he says.

Joel Tampien, who serves as CEO of 4 Degrees Real Estate, which is located within the proposed expansion area at 915 W. Second, wants to see the BID expanded to include the business.

Tampien’s brother, Jordan Tampien, currently serves as an advisory member for the DSP.

“It’s definitely a little dirtier on this side of the tracks,” says Joel Tampien of being just south of the BNSF Railway Co. line near the current southern boundary of the district.

“We’ve got a couple of other businesses within the BID and know firsthand the ambassadors and Clean Team do a great job downtown,” he says.

The real estate brokerage now has 36 full-time employees and is working with as many as 85 real estate agents, says Tampien.

“As a business, we’re all for it,” he says of being part of an expanded district.

Brian Northcraft shares Tampien’s sentiment. Northcraft and his brother, Rusty, are co-owners of Uncle Rusty’s Diner, at 1412 W. Second, a couple of blocks south of the current BID boundary.

“As a business owner down here, you have to work really hard to make your place look better,” Northcraft says. “I’m all for dressing it up and making it feel safer.”

Northcraft says businesses outside the BID aren’t able to capitalize on the “big events” more commonly associated with downtown.

Councilwoman Kinnear is part of a working group that hopes to secure the contract between the city and DSP sometime this month.

Though the parties want to see expansion of the district, it’s largely been understood that it’s a process that could still be at least a couple years away from occurring. Kinnear says there are financial challenges to expanding the boundaries in that area of the city.

“There are a lot of nonprofits operating in the targeted area, and they aren’t required to pay bid dues,” Kinnear says. “There would be an operating deficit, and that has to be addressed.”

Under district terms, property owners in the BID pay fees based on the assessed value of their real estate, with an annual minimum assessment of $110 per property parcel.

The district has an annual budget of $1.5 million, of which $100,000 comes from the city of Spokane. The majority of the money comes from ratepayer assessments, business contributions, event sponsorships, and private investments, according to Downtown Spokane Partnership.

Money from the city exclusively supports the Clean Team and the Security Ambassador programs, according to the DSP.

Kinnear says the city and DSP want to engage businesses and nonprofits to discuss ways to beautify and improve a section of the city that she thinks will be ripe soon for more business development.

She points to emerging new restaurant and retail spaces that continue to open in the face of a waning pandemic within the existing BID boundaries. She believes the southern portion of downtown would draw interest from developers both in and out of Spokane.

“There are people coming to Spokane with fistfuls of cash,” Kinnear says. “It could prove to be money well spent there.”