Driving downtown renewal in THE PALOUSE

Developer restores historic buildings in Pullman, Colfax for $4 million in all 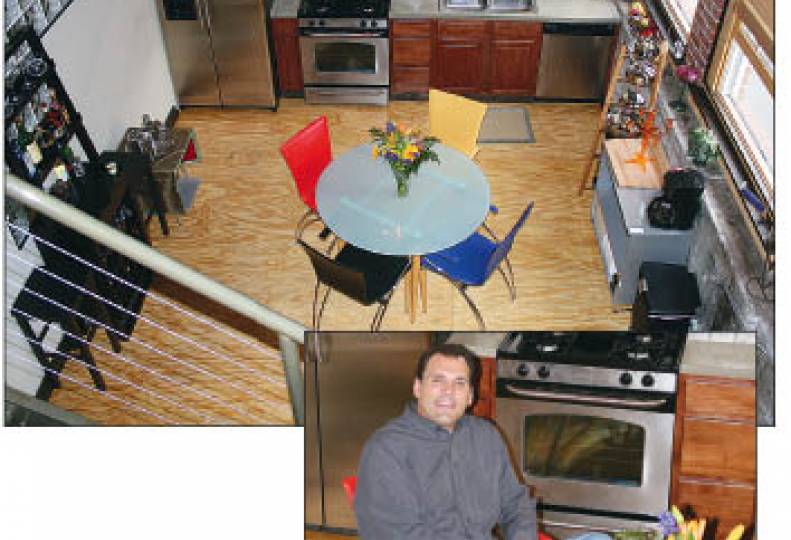 -—Photos by Sandra Hosking
Since 2004, Mike Yates, at right, and his wife, Debbie, have bought and renovated several buildings in Pullman and Colfax, including a former car dealership building now known as Market Square. That project now includes nine residential lofts, one of which is pictured above.

When developer Mike Yates stands in front of a historic car dealership he renovated at the corner of Main Street and Grand Avenue, in Pullman, Wash., he can look east down Main and see the spire of a former church he's remodeling. The pair of projects seem to bookend downtown.

Since 2004, Yates has bought and renovated several buildings in Pullman and Colfax at a total cost of about $4 million through a company called Very Cool Spaces LLC, which he owns with his wife, Debbie.

"Mike has done a marvelous job of taking buildings that are underutilized and renovating them for new tenants, and he seems keenly interested in doing this renovation in historic structures with the sensitivity to their historic character," says Pete Dickinson, planning director for the city of Pullman.

They bought the vacant building initially to house Debbie Yates' business, a gift shop called the Prune Orchard. She had grown up in the area and formerly operated a small farm with her family.

The century-old Combine building in recent years had housed a succession of restaurants and nightclubs. Originally, it had housed retail businesses, such as a barber- shop and a men's clothing store, Yates says.

He says he managed to keep renovation costs relatively low by serving as his own general contractor and doing much of the work himself.

In addition to the Prune Orchard, the Combine building houses the Black Cypress restaurant and Digilent Inc., an electronics company.

"There's been no one who's done as much for downtown Pullman, and has done so in such a short amount of time," says Nick Pitsilionis, the restaurant's owner. "He and his wife both have the right vision of preserving and restoring and making viable—commercially, culturally—these spaces so they don't just get wasted."

"When he's working with his hands, he has a strong sense of design," Pitsilionis says.

Yates and his friends say he's good with his hands, which he learned to be as a young man while making and repairing shoes in Western Washington. He spent 20 years working in the electronics industry doing sales, marketing, and management before moving to Pullman from the Seattle area and turning to real estate five years ago.

The Combine building project set the tone for the way Yates wanted to approach future developments.

Following the completion of the Combine project, the Yates bought an 80-year-old former Chevrolet dealership at the corner of Main and Grand.

In a $2 million project, Yates expanded the building to 21,000 square feet from 15,000 square feet, adding a third level to create nine loft apartments upstairs. The lofts have an industrial-style design and retained some of the characteristics of the dealership building, such as exposed brick walls, rafters, and spiral steel duct work. Design elements also included high-end windows, custom staircases, concrete counters, and air conditioning.

The Market Square project also included shoring up the building's footings, creating office and retail space on the main floor, and enclosing a former drive-through service station at the northeast corner of the building to make it usable as a store or restaurant, Yates says.

Design West Architects PA, in Pullman, did some of the design work.

"It's extremely important to have someone like Mike focused on the value of adaptive reuse, especially in Pullman's downtown core," says Paul Kimmell, of Spokane-based Avista Corp., which has an office in Market Square. "He has the ability to inspire others and build capacity and commitment from others for redefining this downtown.I appreciate that vision."

In an effort to provide affordable housing in the downtown Pullman area, the Yates bought a 1970s-era apartment building at the end of 2007.

"It plays into everything else we're doing because we're finding that people want to live downtown," Yates says, adding that a number of Washington State University students would prefer to live downtown than on campus.

Last spring, the Yates bought the former Pullman Baptist Church building, last spring, began remodeling it, and renamed it the BellTower Event Venue & Performance Space. The company currently rents the space for events and offers art studios and office space for rent starting at $200 a month, including utilities.

The nearly $1 million project, which still is under way, included gutting the 15,000-square-foot building's interior, restoring its original wood floors, and turning the sanctuary into an auditorium that can accommodate 350 to 400 people and the upstairs fellowship hall into a banquet room that can hold about 200 people, Yates says.

The building, located at 125 S.E. Spring, also includes 16 small office spaces that contain from 200 to 500 square feet of floor space.

In Colfax, the Yateses recently completed the renovation of a 1920s-era apartment building they bought in 2008 called the Mill Street Apartments. The building includes eight one-bedroom units and had sat vacant for several years, falling into disrepair.

"It had never been remodeled," Yates says, adding that the bathrooms still had their original sinks and claw-foot tubs. "This is what excites me about it and the church—when you strip back all the layers, peel back the onion, and get down to the old-school stuff."

In addition to developing and managing properties, Yates is a member of the Pullman Chamber of Commerce, a founding member of the Downtown Pullman Business Development Association, the Pullman Arts Commission, and other groups.

"He's not trying to bring the Taj Mahal to downtown Pullman," Pitsilionis says. "He's trying to make it what it is—a college town with agriculture, with a history."

Yates and the city's Dickinson both point to other projects that have helped revitalize the district over the past few years—the Old Post Office Wine Cellar & Gallery, bought and renovated by Tom Handy, and the Town Centre and Bridgeway Centre buildings, built by Corporate Pointe Developers LLC.

"They've done incredible things for Pullman," Yates says. "What I'm seeing more of now is that there's individual people, entrepreneurs taking retail space and doing something with it. An empty building's no good."

Pullman is kind of in an upswing, he adds.

Says Dickinson, "Folks have mentioned that there is a sort of downtown revitalization occurring as a result of these projects, not a dramatic overhaul, but piece by piece."