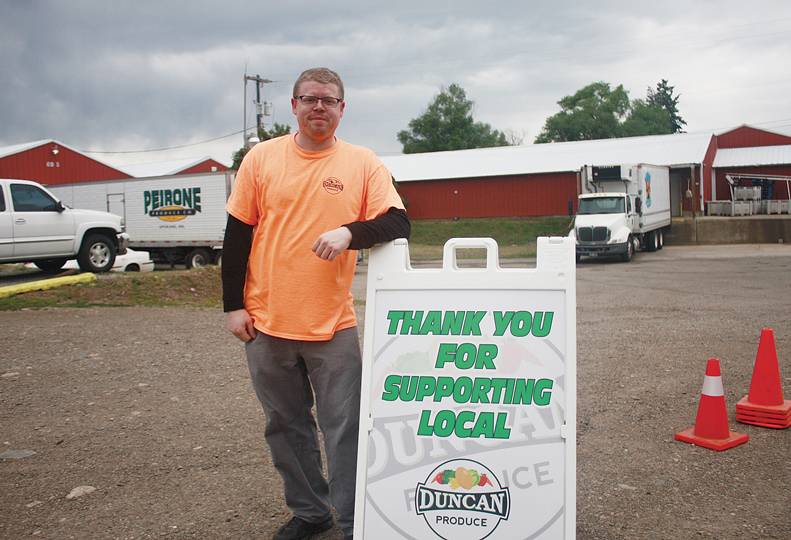 Over four decades ago, John Duncan went from cutting french fries in the basement of a Coeur d’Alene restaurant to opening his own wholesale produce business.

As it turns out, innovation runs in the family.

In March, Duncan Produce, the company the late John Duncan started, found itself in a quandary after Gov. Jay Inslee’s Stay Home, Stay Healthy order halted dine-in service at restaurants statewide.  With the industry largely shuttered in the wake of COVID-19, Duncan Produce was about to lose most of its customer base and a landing spot for large quantities of diced potatoes, cut carrots, sliced onions, and other wholesale goods.

“We basically lost 70% of our business in one day,” said Casey Duncan, current owner of Duncan Produce and grandson of John, who passed away in 2012. “We had orders canceled that we had already processed and cut.”

A day after Inslee’s announcement, Duncan spoke to his employees about impending cutbacks and layoffs, emphasizing that he would do everything he could to keep paychecks coming. The following morning, he was on the phone with a farmer in Central Washington, chatting about the pandemic’s ripple effect.

“I told him we wouldn’t be ordering anything for a while, and he said, ‘Well, people still got to eat,’” Duncan recalls.

The conversation led to an idea. The business that regularly sold 50,000 pounds of potatoes in a week needed to find a new market – quickly. How about something resembling a drive-through farmers market open to the public? Social media could help get the word out.

“I was sitting on all this inventory, so I figured, why not have a sale in the parking lot?” Duncan says.

Just two days after losing most of its patrons, Duncan Produce transitioned into an open-air grocer, catering to clients from across the community who could purchase fresh produce without leaving the comfort of their vehicles. On the first day the business opened to the public, some 60 cars wound around the site on Henry Road in Greenacres, ready to capitalize on dynamic deals like 50 pounds of potatoes for $15.

“It was that way from the end of March through April,” says Duncan, who hired additional employees to keep up with the demand. “On busier days, we’d see around 200 cars go through.”

Due to adding retail to the mix, Duncan Produce is already approaching last year’s entire revenue total at the midway point of 2020. Duncan declines to disclose annual revenues but estimates drive-thru business now represents just over half of overall sales.

The shift has included the launch of a new website on June 22 that allows customers to pre-order and avoid waiting in the drive-thru lane. Duncan said an app should be available soon as well. Meanwhile, a walk-in freezer has been ordered to address the need to store more grocery goods.

These days, the 5-acre sprawl that John Duncan established in 1979 continues to provide food to customers like Mario Espindola of Spokane Valley who drove by on an overcast day last month to place an order.

“This is a great idea,” Espindola says. “It’s helping them, and it’s helping me and it’s good for the community.”

Duncan has expanded the inventory to include items like pasta, hamburger patties, dairy products, eggs and a kabob mix. Orders once placed on Post-It notes have been replaced by a point-of-sale system, accepting EBT, credit, and debit cards. Meanwhile, business from restaurants is slowly returning. The blend of new and old clientele has led to the addition of a 1,500-square-foot building to keep up with the increased demand for potatoes, which remains the company’s staple.

“My priority has always been my crew,” says Duncan, who now employs 22 people. “I want to keep them happy and keep them working. I think we’ve found a good balance with this new setup.”

Linda Fifield began working at Duncan Produce on June 1 after receiving a layoff notice from a job in customer service. She helps take orders from clients in the drive-through lane, chatting cheerfully through a protective facemask.

“People just drive up and don’t have to get out of their car,” Fifield said. “They’re getting great deals, and it’s quick.”

Fifield says she appreciates the positive environment here, led by Duncan who is known for going to bat for his staff. When layoffs loomed, he was prepared to sell his prized 2006 Mustang to help cover employee salaries.

Duncan has also made it a point to exercise generosity with the upturn in revenue. The business has donated produce to Feed Spokane as well as an apartment complex that is home to low-income seniors. In April, Duncan collaborated with Charlie’s Produce to distribute 400 free boxes of produce to residents in need.

Duncan has added to his retail line by bringing in products from local companies. The drive-through menu features fresh salsa from Spokane Valley-based Salsa Mendez, coffee, gravy and biscuit mixes from Farmer Brothers in Spokane, and the signature product from Old Fashioned Kettle Corn.

“We just want to do what we can to help other businesses,” Duncan says.

Duncan has welcomed feedback from customers in diversifying the product line. A fajita mix with a blend of onions and peppers has emerged as one of the more popular products. A stir fry mix, featuring broccoli, peas, peppers, onions and carrots, also sells well.

While the wholesale side of Duncan produce revenues gradually creep back — the company also sells to hospitals and schools as well as larger wholesalers like Sysco and Spokane Produce — it’s clear that John Duncan’s grandson has found a lucrative new niche by way of old-fashioned industriousness.

“I’d like to continue to be a local grocery that provides drive-thru convenience,” Duncan says. “It’s funny. A lot of people didn’t know what Duncan Produce was before this but we’ve been around for a long time.”