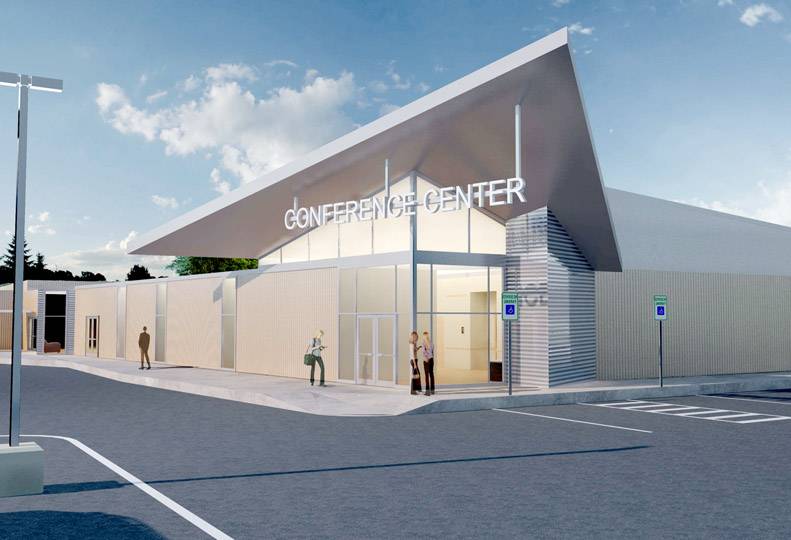 -—Design West Architects PA
The planned new space at ESD 101’s facility, located at 4202 S. Regal, will have a 300-plus person seating capacity. The project is scheduled to start next February.

Brian Edwards, architectural associate with Design West, says the new center will consist of two smaller and two larger conference rooms, all of which will have moveable walls to create larger spaces.

The new center will have a seating capacity of more than 300 people.

Construction is scheduled to start in February and be completed the following December, says Golightly.

During that timeframe, the original 5,300-square-foot center will be remodeled. Work there will include new finishes and a new sprinkler and fire alarm system, he says.

Golightly says the two conference centers will be connected by an enclosed corridor.

The new building will have metal paneling and metal roofs, he says. The interior of the structure will have gray tones and be “warm, inviting, lots of light,” Golightly says. “We’re trying to match what they have existing, so it looks like it’s been there, but put a modern look to it.”

Much of the new conference center will be built on the existing parking lot, says Golightly. A 3,000-square-foot building currently used for storage will be demolished, and parking spots eliminated by the new conference center will be place there, to maintain the current parking capacity, he says. The size of the parking lot won’t change, he says.

No contractor has been selected yet, says Golightly. Bidding is expected to take place in January, says Edwards.

Golightly says ESD 101 needs the new conference center because the current one is booked heavily, and the staff can have difficulty booking their own meetings.

Edwards says, “Adding the square footage is going to help them be able to serve their school districts a lot better and be able to actually run all their in-house meetings on-site.”

In addition to its Pullman and Meridian offices, Design West has offices Kennewick, Wash., and Ontario, Ore.

Golightly says the 34-year-old firm primarily designs educational facilities but has “a little bit of everything” in its portfolio.

Design West has 38 employees, 15 of whom are based at the Pullman office.

It’s one of nine educational service districts in Washington state. The others are in Yakima, Vancouver, Tumwater, Bremerton, Renton, Pasco, Wenatchee, and Anacortes, according to the website of the state of Washington’s Office of Superintendent of Public Instruction.