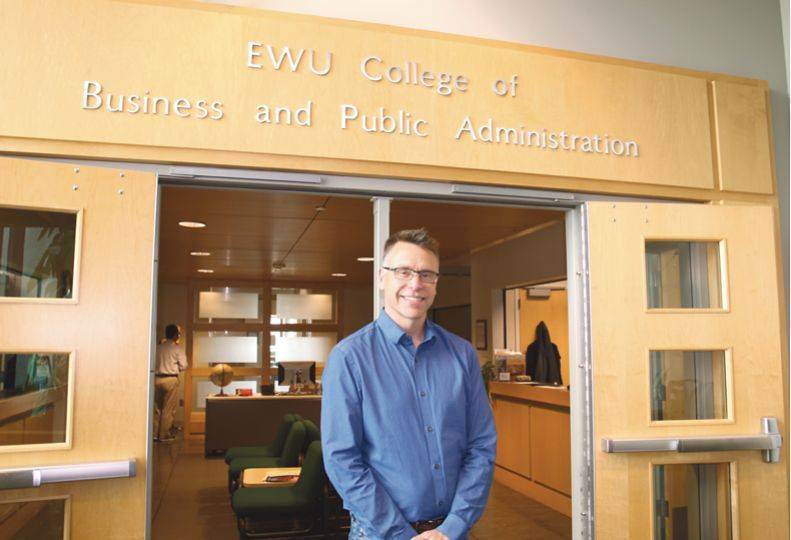 During the academy, scheduled for June 25 through Aug. 17, 12 students will form three teams to find commercial applications for a biodegradable, super-absorbent hydrogel created by Washington State University researchers, says Bruce Teague, associate professor of entrepreneurship and director of the Center for Entrepreneurship.

"They will go from introduction to this invention, to developing and vetting out possible applications for it, and they will take it all the way to developing a commercial launch plan for those businesses," Teague says.

The academy is a "co-curricular" that's not part of EWU's entrepreneurship degree program, partially due to the fact that students will put in over 120 hours of work over the eight weeks and likely wouldn't be able to complete other courses at the same time.

The academy is unusual in its collaboration with WSU and with local startup and investment organizations, Teague says.

Teague says the original idea for the academy came from EWU provost and vice president for academic affairs Scott Gordon, who had a similar program in 2012 while serving as dean of science, engineering, and education at the University of Southern Indiana, in Evansville, Ind.

"The (Southern Indiana) program has been highly successful and resulted in many students joining together and starting successful business ventures," Gordon says. "This is a program I was very excited to bring to Eastern."

Gordon and Teague began searching for funding sources and patented technology for students to work with. Gordon later brought together Teague and Brian Kraft, WSU assistant vice president of innovation and research engagement, in a meeting on technology the students could use.

Ahmad Tootoonchi, dean of the College of Business and Public Affairs at EWU, says that despite the fact the two universities often compete against each other in several areas, the collaboration necessary to create the academy rises above any rivalry.

"Collaboration from two institutions would create an environment where, yes, there would be competition, but education is so sacred that even in our competition, we can help each other grow in a healthy manner," Tootoonchi says.

Gordon says the academy wouldn't be able to survive without an emphasis on collaboration.

"Being involved with the concept of technology commercialization for over the decade, it has become more and more evident that the creation of new ideas, business start-ups, and a thorough understanding of the technology and ideation around the commercialization of intellectual property requires a team,” Gordon says. “The collaboration of universities, business, industry, national and federal laboratories, and subject matter experts is vital to the success of such a program.”

Kraft says the students will be working to find commercial applications for a biodegradable polymer created by WSU professor and researcher Jinwen Zhang.

The material is derived from soy protein.

"We take soy protein, digest it in a certain way, and then we apply some chemistry to polymerize it," Kraft says. "The result is a polymer that has an affinity for water. It's made of amino acids, so it's totally biodegradable."

After Teague secured $124,000 in grant funding from the Seattle-based entrepreneurial education advocacy organization Herbert B. Jones Foundation, the search for students began.

"I was really worried as to whether we could get a good pool of students together this quickly," Teague says. "But the students who have been applying to this are just so impressive. We've got this great mix of degrees coming from across the campus."

Kraft says he and Teague share a common vision of incorporating students from multiple disciplines into entrepreneurship. Bringing together students of diverse academic fields is key to preparing them for the reality of entrepreneurship outside a university setting, Teague says.

"They get to understand and appreciate what it's like to work with people who have complementary skills, which is critical in an entrepreneurial startup," Teague says. "You never start these things alone, and you need people who can do the things that you can't do."

Yanxin "Fred" Liu, assistant professor of management at EWU, will lead the academy, but Liu says he won't be the only instructor.

"It's not just me teaching this. It's more like students drive the academy," Liu says. "Instead of the instructor dominating the classroom, Bruce (Teague) and I position ourselves as facilitators."

Students will meet for four hours a day, four days each week of the academy. During that time, they will generate ideas for how the polymer could be used, conduct market research, create an investment pitch, create prototypes, create a business model, and discover financing sources. The rest of their time, Teague says, will likely be spent at Startup Spokane, which has provided discounted memberships for all 12 students.

Startup Spokane entrepreneurship program manager Megan Hulsey says, "We are providing a place for the students to work and collaborate, to interact with other entrepreneurs, and to convene and collaborate with experts in other fields. We have also collaborated with some local experts to provide some supportive educational opportunities to help students who are actively working on what could potentially be new businesses here in the community, to understand how businesses are built."

Teague says experts from startup and investment organizations, including Startup Spokane, will visit the academy to provide their advice and expertise.

There is no tuition for the academy; at the end of the eight weeks, each student will receive $1,500 and the designation of EWU technology commercialization fellow.

"If they're successful at the end of this program, they will develop a number of document-style deliverables," Teague says. "When they go out and interview, they will be able to talk about real hands-on experience taking a technology all the way through to how you would launch it as a business."

Teague says the students will be able to enter their ideas into student business competitions, and if an idea proves viable, they can begin the process of launching the business without relinquishing part ownership. The nature of technology startups requires early investment, which often leads to entrepreneurs selling equity in exchange for investment. Teague says one of the ways to delay that involves participating in business competitions, which can enable students to raise money without giving up equity.

"It helps them build the value of that company before they go out and ask somebody for an investment,” Teague says. "If they happen to go on and launch the business, then there is also an additional fund in place that is kind of a catalyst fund, where six months down the road, if they've met certain benchmarks, there's an additional award for business they can compete for."

Teague says he sees the potential for the academy to expand to other institutions.

"If we can figure out how to move these ideas forward and really make them viable and to make them launchable, then hopefully we can scale it up and maybe even make it accessible to students from other universities," he says.

If the first summer academy proves successful and receives enough funding to expand, Kraft says he hopes to be able to include students from WSU's Pullman campus in future EWU entrepreneurship academies and may someday start a similar academy at the Pullman campus.

Gordon says that the academy will serve an important role in Spokane's entrepreneur arena.

"With the ever-growing entrepreneurial ecosystem in Spokane, this academy will serve as a feeder of early-stage startups to regional entrepreneurial networks, such as Mind to Market," Gordon says.

Mind to Market LLC consists of a group of Spokane-area investors in early-stage startups.

"By integrating students in a very early phase in the whole entrepreneur system, what we're doing is creating a pipeline of potential founders, leaders, and the next generation of entrepreneurs," Hulsey says. "I think they are a critical part of building up our ecosystem."

"This next five to 10 years is just going to be so dynamic, so incredible for this area, and I think there's a number of reasons behind it," he says. "There are a number of institutions, not just university institutions, that are playing collaborative and really important roles in creating opportunities for innovation and entrepreneurship."