One idea is to build venue near downtown Spokane 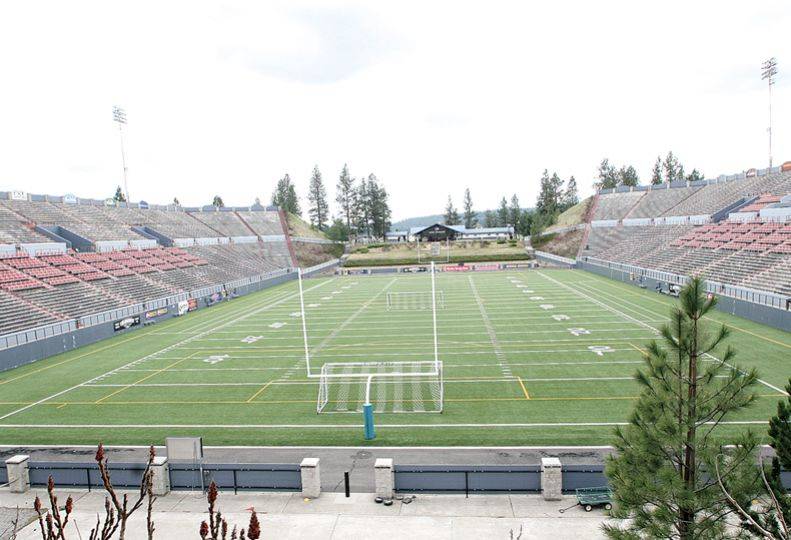 -—File
Joe Albi Stadium has seating for about 30,000 people, but Spokane Public Schools events don’t need that capacity. The school district is looking at other options, including a potential new venue near downtown.

The need for three new middle schools—one of which may be located near Joe Albi Stadium on Spokane’s North Side—has Spokane Public Schools giving thought to potentially working with city officials on the idea of building a stadium near downtown.

Mark Anderson, the associate superintendent of support services for Spokane schools, says district officials and some members of the city’s planning department are scheduled to visit this week with the Spokane Public Facilities District about a possible joint effort to build a high school stadium near the north bank of the Spokane River, just north of the city’s core. He says the district doesn’t have a specific location at this time.

Anderson says the district has had early talks with just city officials about what to do with Albi in the event the district decides to build a new middle school on 20 acres of land south of the current stadium.

In an effort to meet the Legislature’s mandate to reduce classroom sizes for students grades K-3, the Spokane school district previously determined it will move sixth graders out of elementary schools and into middle school, which ultimately will spur the need to develop three new middle schools.

“We need three more middle schools, and in that we’re asking, ‘What do we do with the stadium?’” Anderson says. “Right now, it’s best to say that there’s just a lot of brainstorming going on. I want to be very clear that there’s nothing set in stone.”

Spokane Public Schools is in charge of operating Joe Albi, which is owned by the city. Anderson says the district gave a piece of property it owned on the South Hill to the city in exchange for credit toward the eventual purchase of the stadium. Anderson says the school district will own Albi outright in 2021.

The school district owns the land south of the stadium where a potential middle school could be built. The two other locations for middle schools are on Foothills Drive south of Gonzaga Preparatory High School and in southwest Spokane at Thorpe Road off U.S. 195.

Albi is located at 4918 W. Wellesley, next to the Dwight Merkel Sports Complex, which the city parks department operates. Built in 1950, it has seating capacity for 30,000.

Placing a middle school on school district-owned property south of the stadium reduces considerably the amount of parking that would be necessary for events at the stadium, Anderson says.

Based on the amount of parking space that would remain for the stadium as a result of a new middle school built nearby, reducing Albi to 7,000-capacity seating would be a more appropriate and logical use of space, Anderson says.

“So in that, we’ve now asked, ‘Would it make sense to put a 7,000-seat stadium downtown that would suddenly become more accessible to those who use it?’” he says.

The city and school district have been looking at what to do with Albi for years.

In a study conducted more than four years ago, the city of Spokane said it no longer wants to maintain the stadium, and that it has been operating with an average annual budget deficit of $390,000 for several years.

Two independent studies conducted then found that Albi needs major upgrades to meet code and to continue to function.

“Current condition of Joe Albi Stadium is not marketable for other events,” says a study released in 2013. “Capacity of Joe Albi Stadium doesn’t meet needs of current uses—too large for most events, no paved or lighted parking, facility poses several security and supervision challenges.”

The study and a set of accompanying ideas was developed by ALSC Architects PS, of Spokane, to explore potential options for permanent football and soccer venues.

Later that year, some of the ideas that school officials presented at high schools and neighborhood council meetings ranged from an $18.1 million option to downsize the 67-year old facility to a 6,000- to 7,000-seat facility with improved parking, to a $29.4 million option to construct five high school sports facilities, each with 2,600 seats.

Yet another option presented then was to consider constructing a 6,000-seat stadium at a new neutral site, at an estimated cost of $23.7 million.

Anderson says there have been no new cost estimates established since that study, and the school district and city continue to work with those numbers.

He says the idea of increasing seating capacity at high school football fields is no longer a consideration.

“The challenge with those ideas is parking. North Central, Rogers, Hart Field (used by Lewis and Clark High School) are in the middle of neighborhoods, and there’s just no room,” Anderson says. “Downsizing Albi or building a new stadium are the most feasible ideas.”