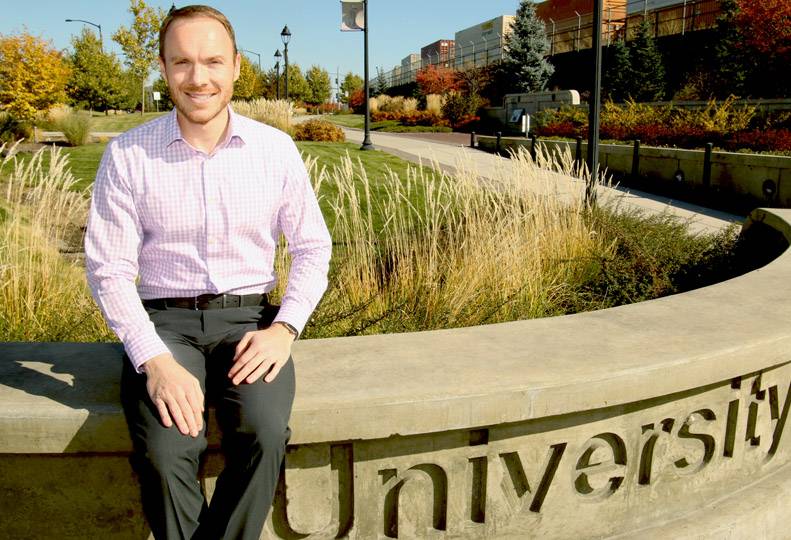 When Lars Gilberts returned to Spokane earlier this year, he moved back to the middle of everything.

As the executive director of the University District, Gilberts is leading the development and promotion of the burgeoning campus east of downtown Spokane that includes Gonzaga University, the Washington State University Health Sciences Spokane, and some offerings from University of Washington, Eastern Washington University, and Whitworth University, among others.

It’s also home to the controversial, $12 million pedestrian bridge project, which is currently under construction, and the Jensen-Byrd building, an old warehouse structure that WSU owns and has tried a few times to redevelop, without success. The district also is at the center of the rapid-transit Central City Line bus system planned to go through the city’s core, which has had its skeptics as well.

The Journal sat down with Gilberts, six months into the job, to talk about the district’s opportunities, visions, and controversies.

Journal: You started in late April. What have been your top initiatives in first few months in the job?

Gilberts: Beyond getting my legs underneath, I’ve been trying to understand what our story is. Does it make sense for the future? I’m six months into the job, and I’m realizing some things aren’t going to be possible until the next year.

Journal: The next fiscal year?

I inherited an amazing board—power players who have invested in this community in a variety of ways, especially within the University District. What I’ve found is that each of them has had a different history with the University District and what they expected with it. What I’ve been doing is trying to bring us back to what I think is our purpose, and staking my job on us getting it right.

The way I see it, the University District was created as a place where education and business grow together. That’s what I’m really trying to refocus us on. This place, physically, is in large part developed. Where there was bare land, buildings have been built. Now, we’re in this redevelopment phase.

Another part of it is, we don’t exist just to build this district up. We exist for greater Spokane and for the region. We’re rallying our board members around that, trying to clearly communicate that.

Journal: When you talk about refocusing, what do you feel the focus was prior to your tenure?

Gilberts: If I were to inherit a district that had just the SIRTI building or an isolated university campus, we would need to do a lot more on the infrastructure to make this a long-term, viable area. But we have hundreds of millions of dollars of buildings that have been added to this area. We have a bridge that is helping ensure it’s not going to be landlocked. We have the Division Street gateway that’s being redone, plans in place for Sprague to be redeveloped. MLK Way is being connected. A lot of those things are in place or being done.

A public development authority often is looking at some of those most basic things. Now, we move to transportation and mobility. We have the Central City Line coming through. What does it mean to have Browne’s Addition, downtown, the University District, and the community colleges all connected? What does it mean that we move into a modern economy that’s not as reliant on parking, perhaps?

We are approaching 20,000 students, faculty, and staff in this district alone, with thousands more to come, how do we manage that growth in a way that isn’t just about warehousing cars and people? How do I leverage what exists rather than create something?

My thought is, the more I can help with that leverage, the piece that we’re missing, which is a faster growing business community, will naturally come, because you’ve got those things coming together. That’s one of my main goals. What do I need to do in the University District to promote a growth in our economy of 4 to 5 percent annually, rather than being stuck in that 1 1/2 to 2 1/2 percent. I don’t know that we’d know what to do with an 8, 10, 12 percent growth rate, but a 4 1/2 to 5 percent growth rate over the next 10 years is going to be driven by knowledge and innovation. That’s going to be tied in some way to what’s happening in this district. That’s what I want to facilitate.

Journal: You talked about the district being mature in terms of infrastructure, but a big piece of the district is the public development authority, which is infrastructure focused. What do you see as the PDA’s role moving forward?

Gilberts: When I talk about the infrastructure, it’s either in place or on the rails and moving forward. Let the engine do the work. Get out and work on something else. Lay some new track. The funds of the PDA, looking at projections, the majority of them are committed. If we get the economy to go gangbusters, yes, then there is more money to commit to things.

The PDA recently approved some criteria that I helped to develop. There are five criteria points. Two of them are tied to return on investment. Rather than these big infrastructure projects that have long-term returns, we’re looking at things that will have shorter-term returns.

As Sprague is being redone, if we can look out and say XYZ parcel has a good chance of being redeveloped into a different purpose. If we don’t make sure there’s the water, the Internet, the other connections there, that’s going to be a cost-prohibitive development. But if it happens, that’s going to throw off $1 million in construction sales tax alone. It’s thinking of those investments that can have that three- to five-year return and would not happen without our investment.

We have a project list that is owned by the UDDA, the nonprofit, and we started out with 104 projects. We keep adding to that, and a lot of those could be funded by the PDA. We’re trying to figure out, is the PDA the only and best partner on that, or can we find other ways to do it. The PDA is focused on, what are the things that only they can do, and what are the projects where we can find other ways to do it—and have it be an impact on the economy in the next handful of years. The faster we can grow the economy, the more money it throws off, the more we can do with the PDA.

Journal: When we talk about projects in the University District, you have a couple that have been somewhat controversial in the Central City Line and the pedestrian bridge. Regarding the conversations on those, in terms of the value of them, would you say those questions have been answered?

Gilberts: The answer is, yes and no. They have substantially been resolved. But I think there still isn’t a lot of common ground. These are little conversations over a larger conversation of, what is Spokane? What are we?

Much of my family lives in the surrounding rural community. Are we the regional rural hub? Are we the capital of the Intermountain Northwest? What do we aspire to be? There’s not a lot of consensus around that. Therefore, you get different responses.

For example, the Central City Line. What problem is that’s solving? I don’t see people agreeing about that. If you don’t agree on that, you aren’t going to agree on the solution.

Some people see it as a solution looking for a problem. Other people see current and future limitations and see this as an amazing way to solve it. Other people see the problem as bigger and say, ‘Why don’t we have a light rail from Liberty Lake to Cheney?’

I think it’s more about how people see the problem than how they see the solution, so I don’t freak out that people don’t love the solution. I’m working more on helping them understand what the problems and opportunities are, then I see people being able to value the solutions differently.

Gilberts: I think it’s phenomenal. And if we could go back and redo that decision, I would encourage that same decision. Now, I think that decision has been reinforced.

When a state institution has housing, it doesn’t create the same economic benefit for the local government. Using a private solution has better economic outcomes for the municipal government and oftentimes for the students and the users themselves.

I’m thrilled with it, and I hope developers realize that WSU and others aren’t planning on building housing. They’re committed to education and not housing, and they need to manage that land for the highest, best use for education.

Journal: What do you see as the future for the Jensen-Byrd building?

Gilberts: (pauses) What do I think about the Jensen-Byrd project?

I think it’s going to take a lot of creativity. I think you have a variety of factors coming together. The one thing I want to avoid doing is joining in the choir of sniping at it. It’s an incredibly challenging situation.

WSU has very limited space to be able to develop before it gets into very expensive redevelopment. I think this is the inflection point of, yes, we can steal another parking lot and build up, but then we have parking issues. This is one of the last places they can do that, but it’s always more expensive to redevelop, and especially a historic building.

If the Jensen-Byrd was located even a few hundred feet in a couple of directions, if the floor heights were different, if the foundation was better, if all of those things were different, this would require less creativity. You could move forward faster and easier. It’s going to require such clarity of thought from WSU, both local and out of Pullman, about what they need and what they see in their future. That’s the starting point.

In the end, they own the land. Their vision is going to be the most critical thing.

In general, I hope that space is flexible. I think it will be flexible in how it’s developed. It could be phased development, if, for example, it’s developed as incubator space for business and can be turned into classroom space eventually.

There’s all kinds of different things. This is a food desert of sorts. We need a fitness club in the area. There are a lot of short-term needs, a lot of long-term needs. Whatever it becomes, it needs to be flexible so that over the next 20 years, it can be reconfigured, maybe even a couple of times.

Journal: What do you see as your role in that conversation?

Gilberts: Time and time again, I see myself as a dot connector. As they work on finalizing their strategic plan, I need to understand what goes into that and what is the priority. The more I can help my partners be successful, great. There are ways to help multiple people be successful around a common vision, and that’s my job.

With this particular project, there’s a lot of adversarial thought, and as soon as I can understand the deepest longings and needs of WSU on this campus, I’m hoping I can bring in other resources and can help others value WSU’s priorities.