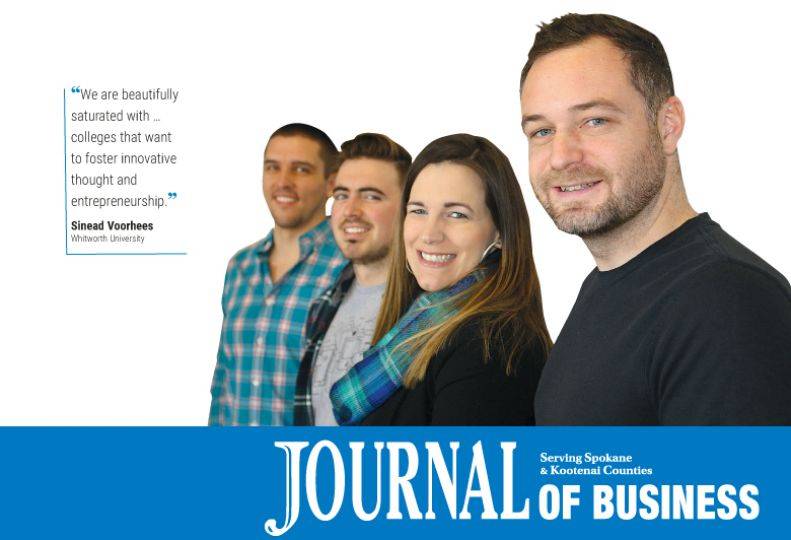 -—Samantha Peone
Whitworth University’s Sinead Voorhees, second from right, stands with the owners of Photoboxx, a past competition winner. They are, from right, Michael Fisk, Devon Lind, and Sam Schoesler. 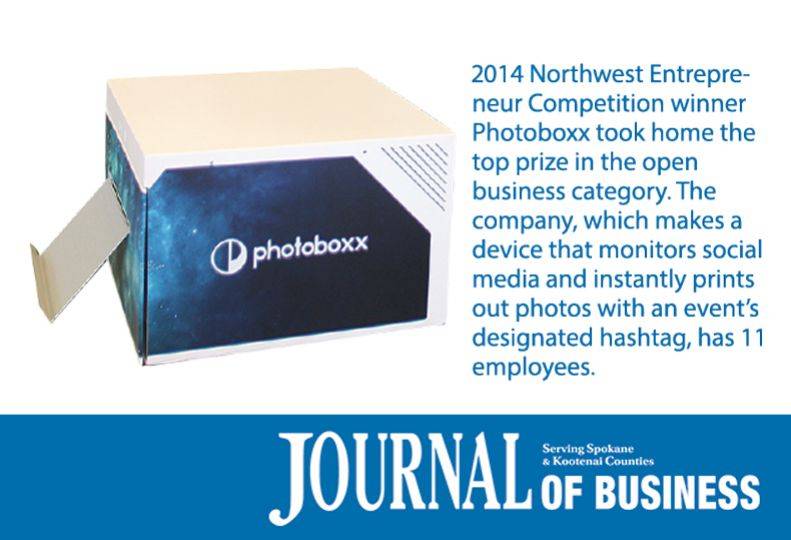 Organizers, supporters, and participants in this year’s Northwest Entrepreneur Competition are eager to see who will join the ranks of past winners that have become successful Spokane companies, such as etailz Inc. and Photoboxx.

Typically, between 70 and 100 students participate in the program, says Sinead Voorhees, director of NEC’s advisory board and director of the Graduate Studies in Business program at Whitworth University. Because 2018 will be North Idaho College’s first year competing, and with Eastern Washington University’s growing entrepreneurial program, Voorhees says more students are expected to sign up this year than last year.

Hosted by Whitworth University for the past decade, NEC involves college and high school students and community members who work together to pitch business ideas to panels of judges. Teams will compete for cash prizes within three categories: technology, traditional business, and open business plan, says Voorhees.

The technology category is for business pitches relating to new or emerging technologies. The traditional business category is for teams that fall into other, more conventional industries, such as retail, manufacturing, service centers, and nonprofits.

The third category, or the open business category, is for teams that have members who aren’t high school or undergraduate college students. Those teams can include graduate students, those working with professors on research, or community members who work with students to form business plans, says Voorhees.

Most contestants are between 18 and 23, with graduate students, high school students, and community participants normally being younger or older than that, she says.

Charlie Wolff, who is on NEC’s advisory board, says one major community benefit of NEC is the collaboration of local entities.

“The universities are all working together in a collaborative effort even though they compete against each other. All the universities are invited to participate and compete,” says Wolff, who was appointed last year by Spokane Mayor David Condon to be business development manager for the city of Spokane. “It’s one of the few events outside, say, the U District that brings all the universities together for healthy competition.”

High schools also can join the college-level competition and even win.

Voorhees says the initial submission requirements consist of executive business summaries and video footage of teams pitching their businesses, both due this year on Feb. 23.

The first round of judging will take place Feb. 27, at the Pitch Premier Night. Volunteer judges will review team submissions, narrowing down the applicant pool to 24 finalists, eight in the three categories, she says. Judges on Pitch Premier Night are different than those evaluating submissions in second and third round. Anyone within the community interested in entrepreneurship and startup companies is welcome to judge the first round.

Voorhees says pitch videos will be played on a continuous reel during that night, like a movie.

The final 24 teams will be announced on March 5, and the second round of judging will take place on March 23, the date business plans are due, she says.

The competition involves three rounds of judging. No teams will be eliminated in the second and third rounds, but teams will be ranked from one through eight in each category, Voorhees says.

The third round of judging will take place on April 17, she says.

Teams will present mock investor pitches to a panel of judges, which can include actual investors. Contestants will arrive at Whitworth in the morning, practice for the competition, go through a brief introduction that covers the day’s schedule, and fill out some legal paperwork. Teams will pitch their businesses and then unwind in the student lounge while judges deliberate, she says. Judges score teams based on material in the second and third rounds. The first round of judging only ensures a place in the final, she says.

In the afternoon, an award ceremony will take place. The winning teams will receive “jumbo checks,” Voorhees says.

In 2014, Photoboxx placed first in the open business category.

Photoboxx is a device that monitors hashtags on social media and instantly prints out photos uploaded with that hashtag.

At the time of the competition, then known as the Inland Northwest Business Plan Competition, Photoboxx was more of an idea than a company, says Michael Fisk, CEO and co-owner of Blender LLC, which now is Photoboxx’s parent company.

“We jumped in and put a lot of focus on Photoboxx as a business and as a product and decided to launch it with the momentum of the business competition,” says Fisk. “We put all guns on (the competition) and put a lot of time into that and won that, which got us on the map locally.”

The competition team was made up of Fisk, who was a nonstudent, and co-owner Devon Lind, who was a Whitworth student. A third co-owner, Sam Schoesler, didn’t participate in the competition.

Now, Blender has 11 employees and occupies 1,600 square feet at 152 S. Jefferson downtown. The Photoboxx device is in a handful of different countries, he says.

Like Photoboxx, Voorhees says many teams go on to establish businesses, sometimes with the prize money they receive.

Using the money to launch a business isn’t a requirement of the competition; however, at least one competition finalist in each of the last eight years went on to start a business.

“Pitch presentations that (teams) give on April 17 is in front of a combination of community members, academics, investors, and business professionals, experts in the field,” Voorhees says. “Many students who maybe went through the exercise as an academic exercise became very encouraged by the actual interest that they’ve received from investors and went on to start a business.”

Other universities involved tend to donate money to NEC as well, says Voorhees.

“Spokane is such a unique of microcosm of universities,” Voorhees says. “We are beautifully saturated with state schools, private schools, (and) community colleges that want to foster innovative thought and entrepreneurship.”

Being college based, NEC is ultimately an academic exercise in which students learn through real experience what launching a business can involve, she says.

The event also is a good fit for Spokane’s collaborative community, she says.

“(We) have a community that supports it,” Voorhees says, “And that’s the reason we’ve been able to continue this for 16-plus years.”