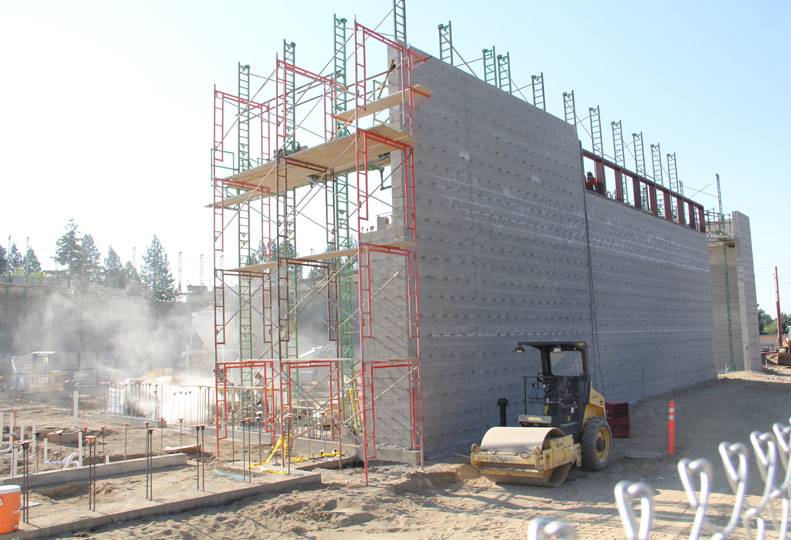 -—Mike McLean
The $6.1 million Salk Middle School gymnasium project is one of a few major 2009 bond projects that remain under construction.

A number of Spokane-area school districts are looking to put bond measures before voters early next year that propose construction projects valued collectively at more than $480 million.

The largest of those would be a bond measure recently aired by the Spokane Public Schools. That district has two options it’s considering, but under both scenarios, construction projects proposed for the 2015-2021 bond period are estimated at $176 million, not including state funding.

Mark Anderson, associate superintendent for support services, says the scenario packages are designed to keep within the current bond levy rate of $1.96 per $1,000 in property valuation, which was approved by voters in 2009.

Both scenarios propose replacing Salk Middle School and Linwood Elementary School at projected costs of $24 million and $20 million, respectively; modernizing and expanding Franklin Elementary, at a cost of $22 million; and constructing a $14 million commons addition at North Central High School.

Both scenarios also include a six-classroom, $4 million addition at Wilson Elementary, $4 million in infrastructure improvements at Adams Elementary, and land purchases estimated at $3 million.

Scenario A proposes a $21 million replacement of Balboa Elementary.

Under Scenario B, a $500,000 minor addition would be constructed at Balboa Elementary, rather than a replacement project. That scenario also would include $14 million for first-phase improvements planned for Joe Albi Stadium, an $8 million field replacement and parking structure at North Central High School, and a $3.5 million classroom addition at Lewis & Clark High School.

Under Scenario A, the district estimates it would receive $28.8 million in matching funds, compared with $24.9 million under Scenario B.

Scenario A also would devote $53 million toward smaller facility improvement projects, technology, and safety and security, compared with $48 million proposed under Scenario B.

Anderson says 2,000 people responded to a survey recently conducted by the school district regarding the scenarios.

“We plan to take a look at that input and share with the board what folks liked and didn’t like and other thoughts they had,” he says.

The board is scheduled make a final decision on Nov. 5 regarding which projects to include in the bond.

“My hunch is we’ll come up with a Scenario C,” Anderson says, which would be a melding of the two plans.

The bond measures, which would require 60 percent voter approval to pass, would go to voters on Feb. 10.

Mead School District is working on a $70 million bond measure that would include replacing most of Northwood Middle School and modernizing Shiloh Hills and Midway elementary schools, says Ned Wendle, the district’s facilities and planning director.

If approved, the bond funds would be augmented with $35 million in state funds, Wendle says.

Safety priorities that would be funded through the bond measure include installing cameras at main access points and non-entry doors, acquiring a door-ajar notification system, and installing entry buzzers.

Other priorities envisioned in the bond measure include technology needs and acquiring property for future school sites.

Under the proposed bond measure, the district estimates the bond levy rate would increase to $1.61 per $1,000 of property valuation from a three-year average of 67 cents per $1,000 valuation.

As the Journal recently reported, Central Valley School District is planning a bond measure that tentatively proposes $112.9 million for capital improvements that would be matched by an estimated $57.8 million in state funds.

The district plans for its recent $2.4 million acquisition of the former Yoke’s supermarket site, at 16 N. Progress Road, to be the catalyst for its bond plans to increase building capacity.

The district plans to move its alternative high school and its Early Learning Center into the building on Progress after renovations are completed.

Other priorities for the bond would be to conduct preliminary planning for a new high school and to acquire land adjacent to North Pines Middle School, onto which the school would expand or move in the future.

The district aims to put a final package before voters that, if approved, won’t exceed the current bond levy rate, which is $1.84 per $1,000 valuation.

Orchard Prairie, a tiny 5.5-square-mile school district that operates one school with 65 to 80 students, plans to put before voters a bond measure currently estimated at $1.2 million.

The school northeast of Spokane and north of Bigelow Gulch Road, was built in 1894 and expanded in 1970.

“We’re proposing a bond for a new multipurpose building for lunch, physical education, and activities,” says Duane Reidenbach, district superintendent. He says the structure would be about the size of an elementary school gymnasium.

“We don’t have a gym or multipurpose facility,” he says, adding that the structure would include a warming kitchen that district patrons could use for events.

Bond funds also would be used to remodel the newer of the existing buildings, reconfiguring classrooms to bring it up to compliance with the Americans with Disabilities Act.

Reidenbach estimates the bond levy will be around $1.30 per $1,000 valuation and says the Orchard Prairie school board will finalize the bond amount in October.

Kramer says the measure still is in the planning stages and the district hopes to set the levy amount in October or November.