School project wrap up in time for unusual academic year

Over $242M in work underway at Mead, Spokane, CV districts 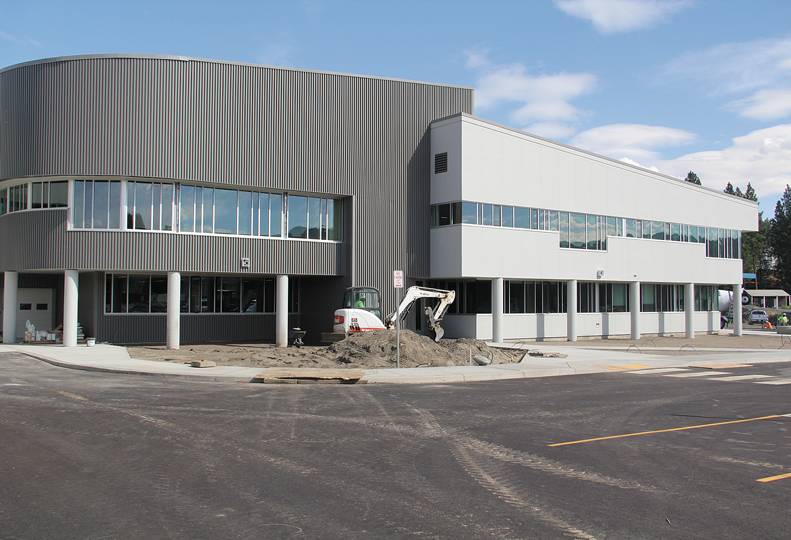 -Natasha Nellis
Central Valley School District has a handful of projects it’s wrapping up now, the largest of which is the Horizon Middle School remodel.

More than $149 million in construction projects by Spokane-area school districts are wrapping up just in time for school this fall, even though students won’t be in them right away, in some cases.

The projects were completed under budget, he says, adding that staff has already begun moving into the new spaces.

“They’ll be on time and ready to go in both a virtual opening or a student opening, whichever comes our way,” he says.

NAC Architecture, of Spokane, designed the Lewis & Clark addition, while the Wilson project was designed by Integrus Architecture PS, also of Spokane. Garco Construction Inc., of Spokane, worked as the general contractor on both projects.

Spokane Public Schools announced its Safe Start plan on Aug. 3. Through it, students first will engage in virtual learning when classes begin on Sept. 14, with the possibility of in-person classes later next year.

Teachers should be moving into that space during the last couple of weeks of August, he adds.

The only remaining portion of the project that still is ongoing is the nearby $17 million stadium and performing arts facility located at 12509 N. Market, near the Creekside Elementary site, though the stadium is on track to be completed in October, he says.

On Five Mile Road, the $38 million Highland Middle School was granted an occupancy permit in mid-August, and teachers have begun moving into the facility, Wendle says.

Graham Construction & Management Inc., of Spokane Valley, is building the facility, which was designed by ALSC Architects PS, of Spokane.

Unlike most school districts in the region, Mead plans to reopen with an option of face-to-face learning this fall in addition to providing at-home learning options for families, says Wendle.

“We have a couple different choices,” he says. “We did that so parents had the ability to choose how they wanted their kids to go back to school.”

Jackson Contractor Group Inc., which is headquartered in Walla Walla and has a Spokane office, is the general contractor on the project.

The expansion was completed two months ahead of schedule, Roswell adds, as students vacated the premises in mid-March, allowing Jackson Contractor to work more quickly to finish the project.

“When the students were gone, they were able to pick up the pace and actually made up quite a bit of time there,” Roswell says.

Other improvements, such as the $3.4 million heating, ventilation, and air conditioning upgrades at four schools in the district are nearly complete, Roswell says.

The systems have been upgraded at Summit School, and at Broadway and Progress elementary schools, he says.

Work is wrapping up at a system upgrade at University Elementary School. He adds the school district also had enough residual funds from the $129.9 million bond, passed in 2018, to upgrade the HVAC system at Central Valley High School.

The district also is replacing turf at Ridgeline, Central Valley, and University high schools at a cost of $2.5 million.

The district’s biggest project set to wrap this fall, the $29.5 million renovation and expansion of Horizon Middle School, is in the final stretch, with workers finishing putting in landscaping and final interior work. Furniture at the school is being delivered, and administration staff has set up shop in the building, he adds.

Horizon is located at 3915 S. Pines Road. LK Clark Group, of Spokane Valley, a joint venture of Leone & Keeble Inc. and T.W. Clark Construction LLC, is the contractor on the project. NAC Architecture designed it.

Each school district still has slated projects valued at millions of dollars, and representatives say those projects are progressing on schedule.

Exterior veneers have been installed at the $102 million, 241,500-square-foot new Ridgeline High School, under construction at 20150 E. Country Vista Drive, is being sealed, so crews will be able to work on the interior during the winter months.

Nunberg adds that the Ridgeline project is coming in under budget, so the district used those remaining funds to fund the HVAC and field upgrades.

Exterior amenities, such as the baseball, softball, soccer, and other sports fields, are being laid out, he adds. The stadiums are under construction with bleacher seating on the visitor side of the football field finished and work on the home team side just starting.

For Mead School District, work on what currently is referred to as Elementary Number 10—the district has yet to decide on a name—is underway near the Highland site, Wendle says.

“We ended up with some state-matched dollars on our middle school that we didn’t anticipate,” he says. The funding enabled the district to move forward with building a new elementary school near Highland.

The new 64,000-square-foot elementary school, valued at about $27 million, will be able to accommodate about 600 students, Wendle says.

Graham Construction is the general contractor on that project, and ALSC Architects designed it.

Looking forward, Wendle says the school district probably will begin planning for a new middle school within the next five years and another high school within 10 years to accommodate expected growth.

Those buildings are slated to open in fall of 2021, says Forsyth.

He adds the school district also is building the new Hillyard Library in partnership with the Spokane Public Library as part of the Shaw project.

Glover is being built by Jackson Contractor Group, and NAC Architecture designed the project. Lydig Construction Inc., of Spokane Valley, is building Shaw, the Hillyard Library, and the On Track Academy, which were designed by Integrus Architecture PS.

The district is in the design stage for the planned Joe Albi Stadium renovation. ALSC Architects is designing the renovation, and Garco Construction has been selected as the contractor.

Each of those schools is expected to be completed by the 2022-2023 school year, and each will be able to accommodate 750 to 825 students, Forsyth says.