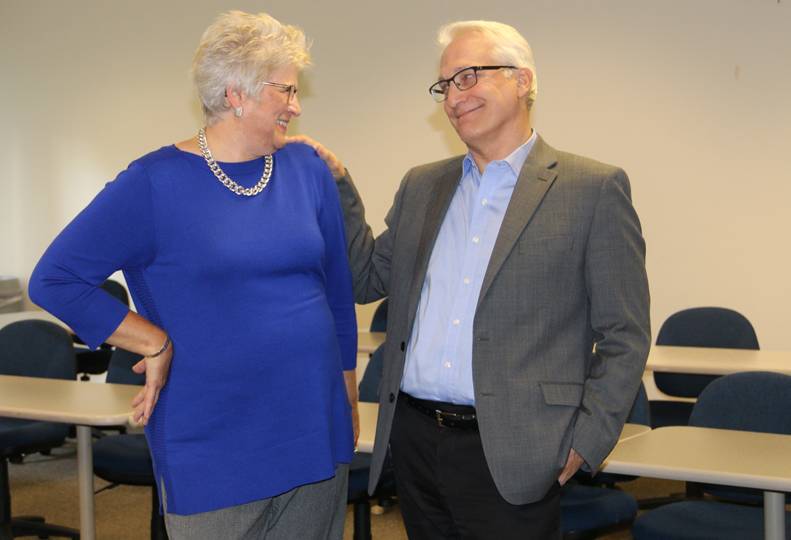 This year, the School of Continuing Studies at Whitworth University turns 100 years old.

The university’s catalogue from the school’s founding year describes the program as tailored “for those whose college career has been interrupted, and who now in professional life, perhaps years after leaving their studies, have the ambition to resume such studies.”

Cheryl Vawter, who retired in June after 23 years as dean of the program, adds, the program has evolved constantly to serve the needs of its students better.

Vawter arrived at Whitworth in the early ‘90s, when continuing studies courses were structured much like their traditional counterparts.

“It was at that point that we started thinking that these classes had always been evenings and weekends, but if … somebody didn’t have very many credits, it could take them eight to 10 years to complete a degree by attending classes part time and at night,” Vawter says.

Then the program launched a new model with courses offered in a condensed format over six weeks instead of a full semester.

“That really took off,” Vawter says. “By 2000, we had converted all of our evening programs to that accelerated format. Somebody coming in with two years of college or university from transfer or community college could get through the program, depending on how fast they wanted to go, in about two and a half or three years, going part-time in the evening.”

The six-week courses are delivered one at a time, so students aren’t trying to pass concurrent classes.

“We deliver the programs, but if you’re taking management and accounting, that program actually belongs to the School of Business,” Michaelis says.

Most of the programs the School of Continuing Studies offers are conducted in cohorts, or groups of students who start and finish a degree together.

“They go through together, which ends up being a very powerful thing,” Michaelis says.

Vawter attributes much of the success of the continuing studies program to the willingness of Whitworth officials to remove as many obstacles as possible for those looking to complete a degree. The program charges less than half the tuition of other programs, and students are provided with all of their textbooks during the first class.

“We want students to be able to just show up for class,” Vawter says. “They’ve got kids and careers and chaos like everybody does, and if they have to deal with parking or anything that prohibits them from just showing up to class, we want that taken care of.”

Whitworth also established partnerships with Spokane’s two community colleges to help provide a next step for those who had completed a two-year transfer degree, as well as students who received associate of applied science, or vocational training, degrees.

“The unfortunate thing with those programs is that most colleges and universities wouldn’t recognize those credits as college-level,” Vawter says.

That often meant that students who had an associate of applied science degree had to start over after transferring to a four-year institution.

Alumnus Josiah Roloff had received an associate of applied science degree in network engineering from Spokane Community College when he began searching for a four-year university.

“At this point, I was 21 years old and I had been working in the field of digital forensics since I was 20,” Roloff says. “The problem was that at that point I was so busy with the workload that I was conducting and the travel that was associated with it that I had a hard time transferring.”

He began taking evening courses at Whitworth, and eventually graduated with a Bachelor of Liberal Studies degree with an emphasis in program management. Roloff now owns his own consulting company, Roloff Digital Forensics LLC.

Alumnus Jeff Ward says he also chose to attend Whitworth because the continuing studies program offered night courses. Ward attended several western Washington community colleges during his time in the military, but never completed a degree. After he moved to Spokane, he began a career in the building materials industry -- then the 2008 recession hit, and he lost his job.

“After I was let go, I had a good friend who said, ‘I’d love to have you come coach football with me -- you do well with kids,’” Ward says. “I figured maybe that was my calling.”

Ward decided to pursue a teaching certificate at Whitworth. It took him three years. Immediately after receiving his certificate, Ward returned to Whitworth to attend the School of Counseling. Today, Ward is a counselor at Cheney High School. His wife, Rebecca, also went through the continuing studies program for her teaching certificate. She’s now a math intervention teacher at Salnave Elementary, in Cheney.

“The community atmosphere, the supportive environment, small class sizes -- all those things that Whitworth advertises were true for both Rebecca and me,” Ward says.

Vawter says the average age of a student in the continuing studies program is about 37.

“It used to be older, but now it’s skewing younger. Our largest population growth is in people in their mid-20s to mid-30s,” Vawter says. “I think it’s because we’re providing the opportunity for them to be able to work full-time and go to school. When we were first doing this, there was an older population that didn’t have (continuing studies) when they were 25 to 35.”

The program originally had an age threshold of 25, but because so many students have transfer degrees through the Running Start program, Whitworth lowered the age requirement to 23.

Michaelis adds, “We recognize that these folks come with some life experience -- not that an 18-year-old doesn’t, but the framework they bring to education is different in a 30-year-old person.”

In the digital age, the greatest challenge the program faces is competition from online programs, Michaelis says.

“We are so much a face-to-face kind of institution that I think we’ve been reluctant (to offer online courses),” he says. “But we think the Whitworth brand is strong enough that we could possibly take that online.”

In addition to expanding to digital learning, Michaelis says the continuing studies program is exploring options for expanding its physical presence.

Vawter established a University District presence for Whitworth, which now occupies a suite in the Riverfront Office Park. But Michaelis says he’s looking to take the program outside of Spokane.

“We’re looking at how we could go a little farther out in the region,” Michaelis says. “We’re very interested in what’s happening in Airway Heights. We’ve looked at some other cities in Eastern Washington that we think are underserved.”