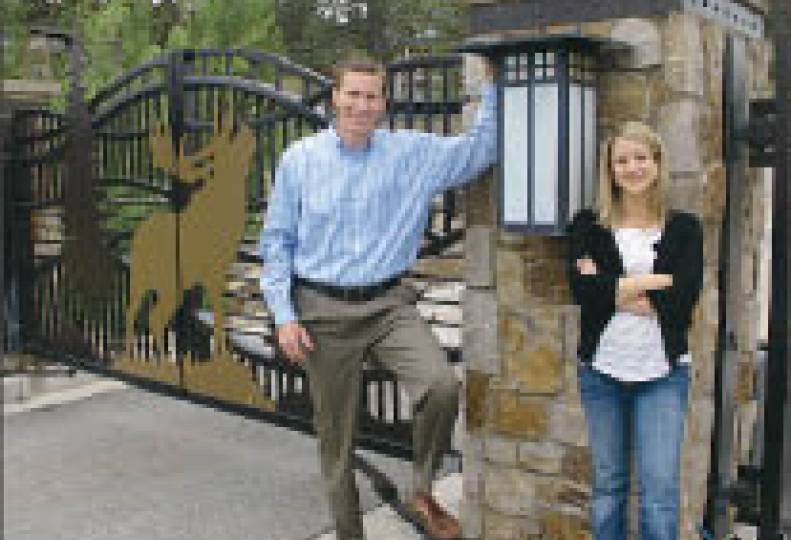 -—Staff photo by Kim Crompton
Realtors Brad Boswell and Carrie Redd say they expect to be spending a lot of time at the development.

"It's up and running again," says Brad Boswell, a real estate agent with Re/Max of Spokane.

Boswell and fellow Re/Max agent Carrie Redd represent two of the three builders that have begun constructing homes in the revived 92-acre planned-unit development, located on a wooded hillside on the west side of state Route 27, south of 32nd Avenue.

D & J "reorganized the lots by doing lot line adjustments and removed some lot lines altogether," creating larger lots but losing 20 to 30 first-phase lots in the process, he says. That process include turning some lots over to the homeowners association for additional common area, which will be available for use by all residents in the development.

The 89 lots now included in the development's first phase—many of them view lots—are all finished, meaning infrastructure improvements have been completed, and are ready for construction, he says. A second phase that was approved years ago for another 99 lots also will be redesigned and reduced probably to 50 to 60 large lots, he adds.

The prices of homes in the development are expected to average around $350,000, Boswell says. That would put the total value of the first phase at more than $31 million.

The property, though, which investors in Elk Ridge Development Group Inc. had bought from prominent Spokane entrepreneur Bernard Daines, originally was to include more than 250 homes priced mostly upwards of $500,000.

The lots now range in size from roughly a quarter to a third of an acre and are priced at $47,500 to $75,000, which compares with reported asking prices of around $150,000 for some lots there before the development fell into foreclosure, Boswell says.

He says he expects the larger lots and lowered prices, obviously a reflection of the weaker housing market now, to stir strong interest in the development.

"You get to the price point where people can actually afford to be in there," he says. "I'm very excited. We're very busy with prospective buyers."

A total of seven homes had been completed at Elk Ridge before the new ownership group acquired it from Sterling Bank in late last June, he says. Documents filed with Spokane County show that it paid $1 million for the property.

"As of right now, we have seven more under construction," he says. "One is sold, one is a model home, and the rest are speculative."

Camden Homes Inc., Morse Western Homes, and Emerald Stone Homes, all of Spokane, are the three builders now working in the development, Boswell says. He says he and Redd are representing Camden and Morse Western as listing agents there, and Steve James, of John L. Scott, is representing Emerald Stone. Boswell declines to identify the owners of D & J Elk Ridge Heights LLC, but state corporation documents listed its governing members as Douglas Main and Jeffrey Amistoso, both of Spokane.

Retired direct-marketing industry executive Gordon Cawthray and his wife bought the first lot in the development and had a custom home built there, which for a long time was one of only two homes occupied there. He says he met with Main and Amistoso when D & J acquired the development site to discuss their vision for it and is excited about the resumption of building activity there.

"For one, I'm very pleased because we were probably a few years away from having very serious problems," Cawthray says, due to deferred maintenance because the originally founded homeowners' association there had lapsed.

He now is head of the re-established homeowners' association and he says he's not concerned that most of the homes planned there will have values several hundred thousand dollars less than his home on Copper River Lane.

"I was more concerned with having a quality investor come in that would fund the necessary improvements and just the maintenance issues that needed to be taken care of," Cawthray says. "We're here for the long haul. We're very happy here. I think there's a wonderful opportunity for it to be a very vibrant community."

The Elk Ridge development site reverted back to Sterling in April 2010 after falling into foreclosure. The bank took over ownership after failing to attract any acceptable bids at a trustee's auction to cover a $5.7 million past-due debt, records show. Sterling at that time was having its own well-publicized financial difficulties, stemming heavily from real estate loans.

By that point, Elk Ridge investors already had put a substantial amount of money into the property, including for some of the infrastructure, streets, and a large landscaped entryway.

A published legal notice said the trustee's sale was scheduled after SV 261 LLC, of Bellevue, Wash., which had entered into a deed of trust in August 2006 to acquire the property, fell into default on a principal loan of $4.8 million, plus accumulated interest, fees, and costs of another $879,000. County records identified Elk Ridge Development Group as the managing member of SV 261.

The project got preliminary approval from Spokane County in February 2006, and the platting of the 136 lots originally in the first phase was recorded in April 2007, clearing the way for the developers to sell lots in that phase to consumers.

Jim Maki, a Spokane-based investor involved in the project back then, told the Journal in January 2006 that home prices in the development would start at $375,000, but that the majority of the homes would be priced at between $500,000 and $600,000. Five Spokane-area contractors were lined up to build homes in the development, he said.