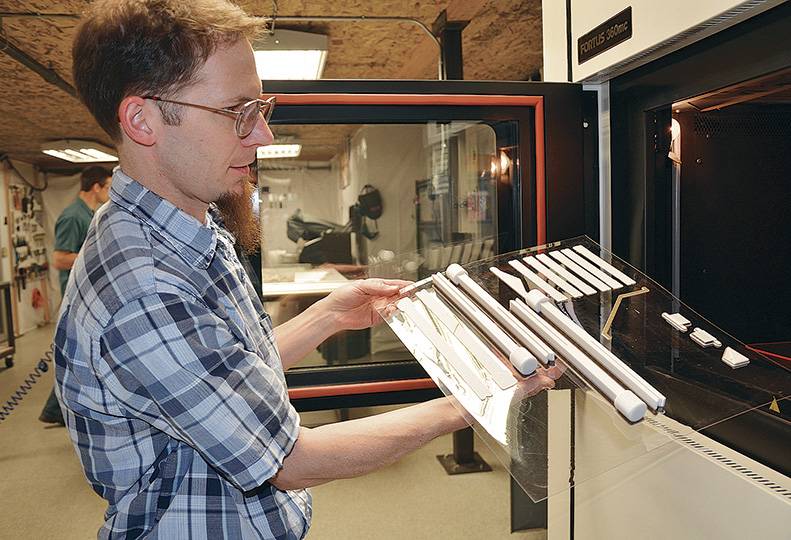 -—Judith Spitzer
Nathan Czech, an engineer at Ecolite in Spokane Valley, takes parts used in light fixtures, which were printed overnight, out of a 3-D printer. The 3-D printing process involves making a solid object of virtually any shape from a digital model. 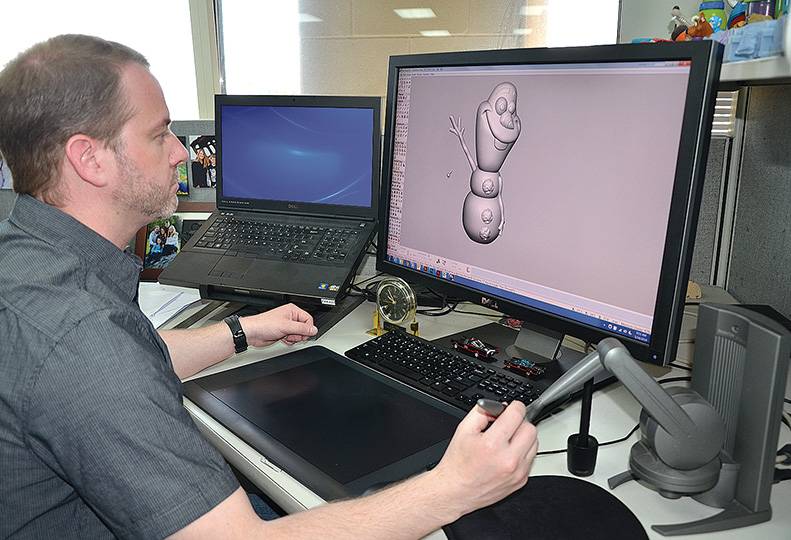 -—Judith Spitzer
Todd Hone, a sculptor at Zak Designs in Airway Heights, is sculpting a design on the computer. The computer file will be transferred to a 3-D printer, which will print out a full-size prototype.

Once perceived as grist for sci-fi aficionados in a distant future, 3-D printing is turning up in unexpected places, in vastly different industries, and with surprising applications from the manufacture of prototypes, to the creation of synthetic body parts, toys, jewelry, auto parts, and artwork.

Companies in and around Spokane are enlisting 3-D printers to generate full-scale models of rings and earrings, plastic prototypes of new and existing products, bone-like material for use in orthopedics, and dental work. One local company is even selling a 3-D printer that can replicate itself.

The 3-D printing process involves making a three-dimensional solid object of virtually any shape from a digital model. Unlike traditional techniques, where objects are formed from molds, resulting in some wasted materials, 3-D printing enables workers to model the desired object on a computer and print it out with plastic, metal, or composite materials.

Engineers and designers say it has revolutionized manufacturing.

The most common 3-D printing process uses a computer’s design software to communicate the size and shape of a product to a printer, which typically uses some type of plastic filament, layered on top of itself, to create three-dimensional objects. The process uses ultraviolet light to fuse the layers together. Prices range from about $800 for an online kit to make a 3-D printer, to $750,000 and above for industrial-type 3-D printers.

At Spokane Valley-based Ecolite Manufacturing Inc., a developer and manufacturer of high-efficiency optical components for the architectural and commercial lighting industries, engineer Nathan Czech says 3-D printers have changed how the company does business—for the better.

“It has sped up the design process dramatically,” Czech says. “You have to go through so many iterations while you’re designing, and with this printer, you can see quickly whether the design makes sense, and you can make the changes very quickly.”

Ecolite, in business for more than 40 years, employs 160 people at its Valley offices.

Czech says the engineers are able to design an assembly fixture, run it off on the printer, and know immediately whether the design works, saving countless hours. And he says the printers are “really easy to learn how to use.”

Czech says he even bought a less expensive 3-D printer through e-Bay that he put together himself and uses at home. “I like to design stuff for my own use, so I make prototypes of products and eventually would like to be able to make something to market. Right now I’m working on a prototype for rock climbing and I also use it for model airplanes.”

“We started using the 3-D printers in-house more than three years ago,” Carpenter says. “We use it for rough prototyping and product shape, to see in what we designed on the computer. In other words … does it feel right? Is it the right size? With the 3-D printer, everything is tangible, and we can verify it before we go to the next step in production.”

Before the company began using 3-D printers, it had to sculpt the prototype for a new product in clay, create a mold, and then make changes to it before the product was ready to be seen, Carpenter says. This process significantly speeds up the overall development process. “It used to be a three-month process to make a new product. Now we can do it in weeks,” he says.

And time is money. Carpenter says the savings in time means the company is able to react sooner, which means more business opportunities.

“The reality is that if we can’t meet ship dates, we lose out on business,” he says. “And being able to react quickly allows us to get business we would not have gotten before.”

Zak Designs, located at 1603 S. Garfield Rd., sells its products at retailers such as Target and Walmart as well as online at retail sites such as Amazon.com and through its own website.

Zak Designs is known for its licensed children’s dinnerware that is decorated with images of popular Disney characters. Its relationship with the big-name animator has existed since 1988. The company employs about 150 people in Airway Heights and has been in operation since 1976. The company has eight international offices in addition to its Spokane headquarters.

At Washington State University in Pullman, Susmita Bose and Amit Bandyopadhyay, both professors in the mechanical and materials engineering department, are using 3-D printers that use ceramic as well as metal to replicate synthetic body parts.

The printers produce a bone-like material that acts as a scaffold for new bone to grow on and ultimately dissolves in the body, with no apparent ill effects. They have seen promising results in tests on rats and rabbits, the professors say.

Further, Bose says it’s possible that doctors will be able to custom order replacement bone tissue in a few years. “If a doctor has a CT scan of a defect, we can convert it to a CAD (computer-aided design) program file and make the scaffold according to the defect,” she says.

They are also researching the use of metal to make implants used in dental restorations and other parts of the body, such as a hip. Their research shows that the addition of silicon and zinc more than doubles the strength of the main material they use, which is calcium phosphate. Currently they are working on the addition of silver to the process, since it is an anti-bacterial agent, which helps minimize infection. Bose says the metallic materials are used for implants such as in hip or knee replacements.

“A high-powered laser is used with metal powder to make it liquid, and the liquid metal becomes the ink,” she explains. “It then prints layer by layer, whatever you want to print.”

The time it takes to print a body replacement part depends, she says, on how complicated the design is, the size of the implant, and its geometry, but a typical implant can take only a few hours.

The department currently has four 3-D printers, one that was optimized to use metal, one that uses ceramics, and two that are plastic-based.

The funding for their various projects comes from the National Institutes of Health, the MJ Murdock Foundation, of Vancouver, Wash., and the W.M. KECK Foundation, of Los Angeles, as well as other donors.

Several companies are making efforts to develop affordable 3-D printers for home desktop use. As cost comes down, 3-D printers are becoming more appealing financially for manufacturing personal products.
One of those printers, called the RepRap, is one example.

The RepRap Project is an initiative to develop a 3-D printer that can print most, or all, of its own components. RepRap is short for replicating rapid prototype. The RepRap Project started an open-source 3-D printer revolution because all of the designs produced by the project are released under a free software license. The RepRap project was invented by British mechanical engineer and mathematician Adrian Bower, and the idea first appeared online in February 2004.

Aaron Dale, an independent software developer in Spokane, operates NW RepRap out of his apartment in Spokane. Dale heard about the RepRap project and set out to build one from a RepRap kit he bought online.

When Dale received his printer kit, he was dismayed that he had to shop for so many different parts and that it took much longer than he thought to put together. He thought it would be much easier if people could buy a kit with source materials already contained within it. So he put together his own kits, which took almost a year. He spent another three months, he says, recording eight hours of how-to videos on building the printer from his kit.

Dale started selling the kits online in January 2013 and has so far sold about 200 of them. The kit sells on Amazon.com for $799 and on Dale’s website, NWRepRap.com, for the same price. Dale says a lot of people find him from videos on YouTube.

“Lots of people will use the videos and want to do prototyping for new widget design and will print those out,” Dale says. “Then they can modify the (product). Some use it for toys, and some to make parts for more 3-D printers.”

Ted Miller says he was fascinated by what he was reading about 3-D printing and, being a curious tinkerer, he ordered the kit from NWRepRap last year. Miller, who lives in Panama, built the printer with the help of the online directions and downloaded the necessary software from Dale’s online site.

“To my amazement, it worked the very first time,” Miller says. He played with it for a few months and printed all sorts of objects, some completely impractical, to become comfortable with the various aspects of fine tuning the printer and its software. “Then, I tore it down completely and packed it into a suitcase to take with me to our winter refuge in the mountains of Panama.”

He rebuilt the printer in Panama and says it still worked.

Miller plans to use his new 3-D printer to teach kids about the practical applications of basic geometry.

“I’ve also used it to print up various pieces of art and, as another practical application, to create replacement plastic parts which have broken around the house,” he says.

Tom Daugherty, of Coeur d’Alene, works with a collaboration of other 3-D printer owners from his home office there. He says the advantages to using a 3-D printer are many.

“If you only need to make 10 or 20, or even 200 of something, this is a way to do it quickly,” Daugherty says. “You can build replica parts for things like antique toys, parts for model airplanes, old car parts for restorations … there are a lot of hobbyists using the 3-D printing technology.”

Daugherty says people are also using 3-D printers for artwork such as sculpted items, and people love the fact that anything can be personalized.

“You can make something unique and then put your initials on the work. You can scan just about anything and then create that in plastic. To be able to get the design right, you may have to do some reverse engineering, or do it the old-fashioned way and measure everything, and then create it with software,” he says.

Daugherty owns two 3-D printers and works from his home in Coeur d’Alene. He is just getting up to speed with a website he’s created called makeminenow.com. Working with several different independent contractors, or what he refers to as a “network of guys,” Daugherty takes on different projects that use a wide variety of 3-D printers owned by members of the group.

Daugherty is schedule to make a presentation on how to make 3-D printing materials/filaments from potato waste products at a 3-D Printer World Expo being held in Bellevue this summer.