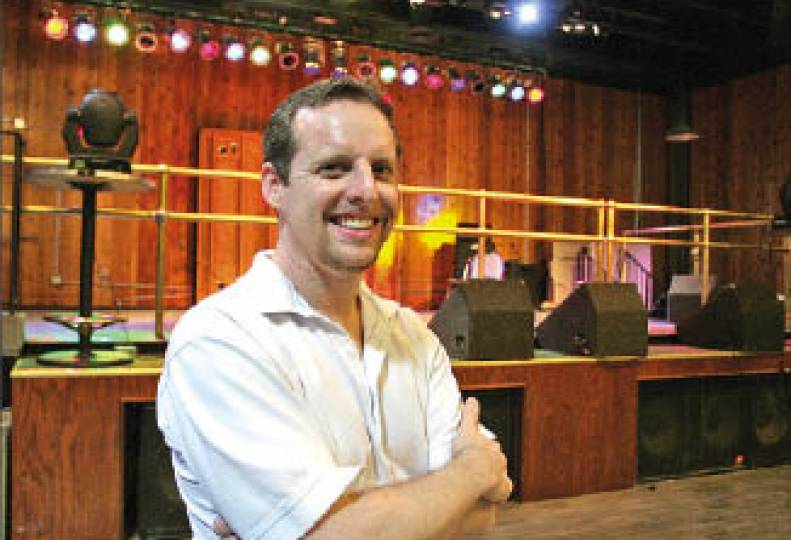 Restaurateur Jayme Cozzetto thinks he's found an ideal recipe for hospitality success—a melded offering of transportation, dining, and music entertainment—that he hopes will become a popular choice for a night on the town here.

Cozzetto, owner of a new concert and event venue called Stage 54, at 21 E. Lincoln Road, is adding the concert hall to his stable of hospitality ventures, which also include two Thai restaurants and a limo service.

"I've got it down to a science," Cozzetto says.

Cozzetto opened Stage 54 at the end of March in space that formerly housed a concert club affiliated with Swackhammer's restaurant. Most recently the space was occupied by a nightclub called Elements.

A Top of China Buffett restaurant operates in the other half of the building. Cozzetto says he expects to employ about 20 people at Stage 54.

Cozzetto says his marketing plan for the venture relies heavily on promoting group packages that include limousine transportation, discounted dinners, and entrance to a VIP suite at the new concert venue.

He says he hopes to expand his fleet of limousines, which currently includes two, and to open another Bangkok Thai restaurant, likely in Spokane Valley, this year. He says he hopes to bring in about $900,000 in revenue through Stage 54 in its first year. He says so far he's invested about $35,000 in getting the venue open, adding laser lights and a new sound system, and plans to build more floor space on a second mezzanine level above the bar area.

Cozzetto says his plan for Stage 54 differs from recent incarnations there in that it's a concert venue, not a dance club, though he says he plans to keep it open seven days a week, using local DJs and holding dance nights when live acts or events aren't booked. He says he plans to offer a form of karaoke that will use a live band rather than a recording to provide the music. Cozzetto says he wants to draw a variety of musical acts, including country bands, which he asserts don't have many available venues in Spokane.

The bar area can be segregated from the concert space, allowing for some all-ages shows, but it will be predominantly an over-21 venue, he says.

Cozzetto often donates limo rides and dinners to charity events to spread word of mouth about his business enterprise, while providing a community service. The winner of a charity drawing or auction gets a complimentary limo ride for up to 20 people in the SUV-style limousines that the company owns, dinner for two at the restaurant and discounts for the rest of the group, and entrance to the VIP suite at Stage 54. Cozzetto says the strategy is working so far.

"It's immensely profitable to get a group of 14 to 20 people" into the restaurant and concert venue, where they buy food and drinks, he says.

Cozzetto says he opened his first restaurant on Grand with his partner, Kay Chindapradist, in 2005, and they later bought the former Riverview Thai restaurant at Riverwalk and converted it to a Bangkok Thai restaurant. About two years ago, Cozzetto decided he wanted to expand into entertainment and event activities, and launched the limousine company on his own. He says he's been searching for an events center venue for some time. He and his partner hope to open their third restaurant by year's end, and he plans to buy a third 20-passenger limousine in the next few months. Stage 54 also is a TicketsWest outlet, meaning it can sell tickets to its own and other local events, he says.

Cozzetto says the former Swackhammer's concert site is a good-sized venue for Spokane. It can accommodate about 300 people now, and once he installs sprinklers this year, it will be able to handle up to 500 people, he says. Later, Cozzetto hopes to expand the second-floor mezzanine area to increase the size of the VIP space to hold an additional 100 people. He says the venue will remain small enough that it can complement the Knitting Factory concert house downtown, rather than compete with it, but allow larger VIP groups to take advantage of packages.

Cozzetto says he's developing a working relationship with the Knitting Factory that he hopes will benefit both.

"We'll help each other" with cross promotions and referrals for acts that are too small for one venue or too big for the other, he says.

For the most part, when an act books a show at Stage 54, the band or act will rent the venue for a price that includes staffing, he says. Stage 54 keeps the profit from food and drink sales, and the concert act keeps the revenue from ticket sales. Cozzetto says, though, that he will make different arrangements with bands on a case-by-case basis if they can't afford to rent the venue outright.