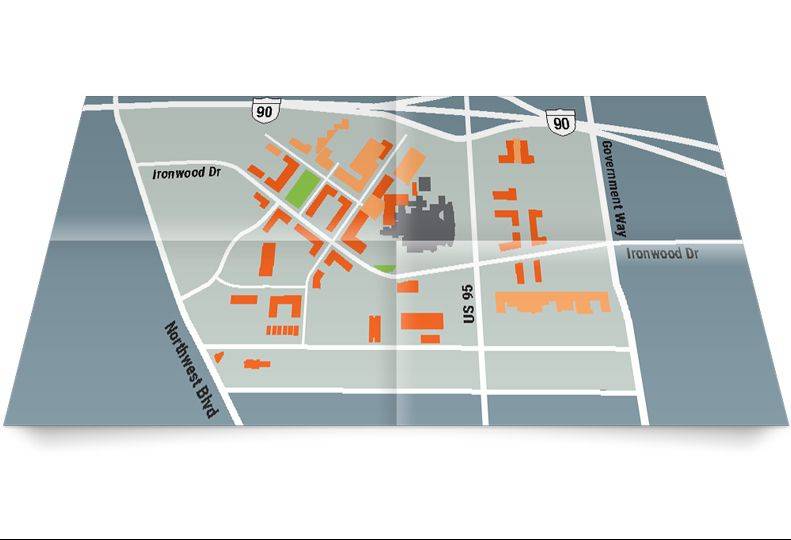 The city of Coeur d’Alene is considering forming an urban renewal district to help create a health corridor.

The city has formed a coalition that includes ignite cda, Kootenai Health, and Omaha, Nebraska-based consulting company HDR to develop a master plan and economic feasibility study for the area bounded by Interstate 90 to the north, Government Way to the east, Northwest Boulevard to the west, and Davidson Avenue to the south.

The coalition envisions creating a health-oriented development in which health care organizations would be integrated into an easily accessible neighborhood in which people could live, work, shop, and access health care.

Hilary Anderson, community planning director for the city of Coeur d’Alene, says that to help fund infrastructure improvements needed in the growing neighborhood, the coalition is seeking to establish an urban renewal district among its funding mechanisms.

Anderson says HDR intends to present an updated master plan and an economic feasibility study this month. An earlier version was presented at the City Council’s Aug. 20 meeting.

Anderson says the concept of creating a designated health care district arose from Coeur d’Alene-based nonprofit organization CDA 2030 Inc., which is tasked with producing and guiding a long-term vision and plan for the Coeur d’Alene area.

In 2017, the national nonprofit organization Urban Land Institute visited Coeur d’Alene and made recommendations for the envisioned health corridor, including creating a unified vision, better transportation within the area, and potential land uses.

Since then, HDR has been working to create the master plan, Anderson says.

“It’s been a multi-part process, but it really did derive from community input saying that this is a priority area, especially since Kootenai Health is the largest employer in our area,” Anderson says.

With 2,717 full-time employees as of last Nov. 1, Kootenai Health topped the Journal’s most recent list of largest employers in Kootenai County.

The area is due for an overhaul, Berns says.

“Kootenai Health is struggling to meet its demands on the campus, including growth and transportation issues,” Berns says.

Anderson adds, “That area on Ironwood and Lakewood south of I-90 and west of U.S. 95 continues to grow, and there are some great, successful businesses in there, but we also have some functionally obsolete buildings.”

Lack of infrastructure for pedestrians and bicyclists, as well as a limited road network, also are concerns for the area.

“It’s great to be next to I-90 and U.S. 95 for visibility and some access, but it also creates a very congested area, and it’s difficult to get out of those corridors and access the health corridor,” Anderson says.

If the City Council accepts the master plan and economic feasibility plan, Anderson says, the city’s planning commission will review the documents and make recommendations before ignite cda and the council take further action to form the district.

Creating an urban renewal district is a method of leveraging property taxes and future property values to pay for economic growth.

“Forming an urban renewal district would allow the public sector to help the private sector create by leveraging the public money that we can bring together with the private-sector money to help with infrastructure, transportation issues, and development,” Berns says.

Anderson says the aim is to get an urban renewal district designated by the end of this year so that the base tax valuation would start as of Jan. 1, 2019.

If the City Council elects not to establish an urban renewal district, Anderson says the health corridor is far from dead, but it would take more time to accomplish.

“It just means we have to figure out if there are other funding sources,” Anderson says. Either way, she contends, the city needs to look for funding opportunities and partners for a health corridor.

Berns says if an urban renewal district is formed, the coalition would request that the district be assigned a 20-year lifespan, the maximum length of time such a district can exist under Idaho state law.