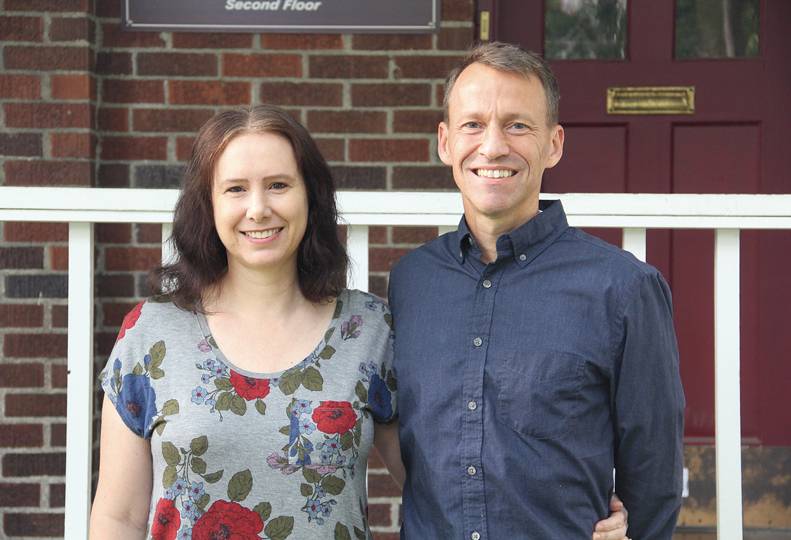 With just four employees, including owners Mark and Allison Esvelt, Millwood-based environmental engineering company Esvelt Environmental Engineering LLC is small — and the Esvelts intend to keep it that way.

Allison Esvelt says the company, located in a 900-square-foot office at 8908 E. Dalton, fills a niche by specializing in  water and wastewater engineering services for municipalities and industries.

“There’s a need for professional engineers that specialize in that area,” she says. “A lot of companies do that as part of their services, but they don’t focus on it and spend decades honing those skills.”

She claims that because Esvelt Environmental fills the niche so well, the company doesn’t need to expand.

“We want to specialize in the technical part of designs,” Esvelt says. “Most consulting firms want to grow; that’s just not us. We don’t want to get so big that we’re managing people more than actually doing the engineering.”

“It allows us to do both the design and operational assistance for our clients,” she says. “We’re available if the clients need any kind of advice on optimizing the treatment system that we designed, permitting assistance, or any kind of modifications.”

Esvelt Environmental started out even smaller than it currently is. From the company’s founding in 1976 until the mid-’90s, founder Larry Esvelt — Mark Esvelt’s father — was the sole owner and employee of the firm.

“He started it specifically to specialize in water and wastewater treatment services for industries and municipalities,” Mark Esvelt says. “He worked for some companies here in town and had a pretty good client base when he went out on his own.”

The couple met while attending graduate school for water and wastewater environmental engineering at University of California, Berkeley. Mark Esvelt began working at Esvelt Environmental in 1994, and Allison Esvelt joined him the next year. In 2006, the company reorganized into a limited liability corporation, which gave Mark and Allison Esvelt partial ownership.

“A lot about the way we run our business is very similar to when the company was originally started,” Allison Esvelt says. “It’s based on word-of-mouth, personal relationships, and working with people for decades.”

Larry Esvelt was still working on active contracts when he died in 2011, Mark Esvelt says.

He says some Esvelt Environmental clients who had relationships with Larry Esvelt before he started the company remain current clients.

“He helped them plan and design upgrades for their facilities in the ‘70s, and then came back and did another upgrade in the ‘90s,” Mark Esvelt says. “In the last few years, we’ve come back to a few of those same clients and done yet another upgrade, either as they grow and expand or as the regulations change and advance.”

As state and federal environmental regulations evolve, the water and wastewater treatment facilities of industrial water users and municipalities have to keep up.

Most of Esvelt Environmental’s recent projects have been improvements to water systems in order to maintain acceptable levels of regulated, discharged chemicals.

Allison Esvelt says the company was involved in the pilot studies for the city of Spokane’s wastewater treatment plan and provided technical advice to the city for meeting low-level phosphorus limits for discharge into the Spokane River.

She adds, “We also helped with pilot studies and assisted in the design of the Post Falls water reclamation plant, for discharging to the Spokane River and meeting those really low phosphorus limits, as well as to produce reclaimed water.”

The Spokane and Post Falls projects are currently under construction, she says. The company worked on similar projects for the cities of Liberty Lake and Airway Heights.

“We’ve pretty much had our fingers in most of the wastewater treatment plants in the county,” she says. “Most of our clients and most of our projects the last several years have been fairly local to Eastern Washington and North Idaho, although we do have a few clients in Western Washington that we work for on a semiregular basis.”

Esvelt Environmental’s largest current project is the upgrade of the city of Cheney’s water reclamation plant. The upgrade involves adding advanced water treatment to the system in order to produce reclaimed water.

“We’re doing the filtration and the advanced disinfection so that they can pump it back to the city center and use it for irrigation at the city’s schools, playfields, and parks,” she says. “It consists of adding filtration and advanced disinfection to the existing water reclamation plant. We have at least a dozen different subconsultants working for us on different parts of the project.”

Design of the project is expected to be completed in early 2021. If applications for more than $14 million in funding from the Washington state Department of Ecology revolving fund are approved later this year, the project will go out for construction bids next spring.