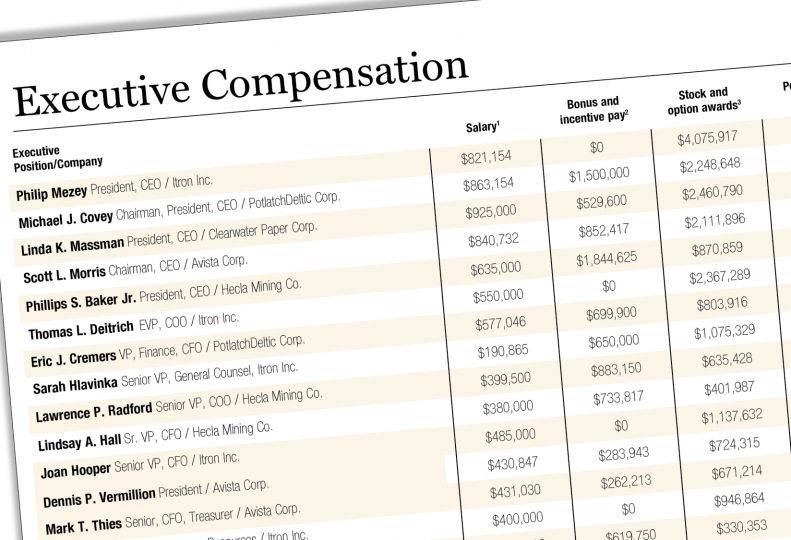 Total compensation sustained a double-digit drop for executives at Inland Northwest-based publicly-traded companies in 2018, according to a Journal of Business analysis.

Average annual total compensation for 35 executives at seven public companies came in at $1.68 million, down 14.4% for the same group of C-suite corporate leaders a year earlier. Of the 35 people listed, only six received increases in compensation in 2018.

That’s a hairpin turn from the results of last year’s analysis, which are based on proxies that public companies are required to submit to the U. S. Securities and Exchange Commission. In 2017, total compensation for 40 Inland Northwest executives at eight public companies hit $2.01 million, which was a 23% increase compared to the previous year.

That jump, however, was somewhat anomalous, since leaders at Gold Reserve Inc. received huge bonuses and one-time, triple-digit pay increases due to the $1 billion settlement of a well-documented, years-long legal dispute with the Venezuelan government. When Gold Reserve is removed from last year’s analysis, pay was basically flat, decreasing 0.2% in 2017 compared with the previous year.

Considering total compensation for executives decreased by 2% in 2016, that would be three years of declining average annual pay for those in the Inland Northwest C-suites, if not for Gold Reserve’s effect.

Median figures show a less precipitous decline in pay among executives, but a double-digit decrease nonetheless. Median total compensation for 2018 came in at just under $1.2 million, down 11.6% from the previous year.

Total pay for what’s referred to as named executive officers includes stock options and grants, pension plan changes, and other perquisites, in addition to salaries, bonuses, and incentive pay. Consequently, the amounts listed in SEC filings are much larger than what executives actually take home.

That said, when factoring in only salary and bonuses, the analysis suggests a similar decrease. Average salary and bonuses for Inland Northwest executives came in at about $780,600, down 13% compared with a year earlier.

Once again, median numbers don’t paint as dim of a picture. Median annual salary and bonuses dropped to $625,000, down almost 4% from the previous year.

Each annual analysis contains a different mix of executives, due to retirements, new hires, and a variety of other changes to the executives involved. Consequently, average and median compensation figures from one study aren’t comparable to data from the next analysis.

Also, the number of companies involved can – and frequently does – change, due to mergers, acquisitions, business closures, or other factors. Most recently, Coeur d’Alene-based Idaho Independent Bank was acquired by Billings, Montana-based First Interstate BancSystem Inc. in a transaction that was completed in April. That acquisition decreased the number of publicly traded companies based here to seven from eight.

That said, beyond Idaho Independent Bank no longer being on the list, the list includes most of the same players it did last year. Only two named executive officers appear to be new to their respective companies: Sarah Hlavinka joined Itron Inc. as senior vice president, general counsel, and corporate secretary last August, and Arsen S. Kitch became senior vice president and general manager of consumer products at Clearwater Paper Corp. in January 2018.

The makeup of the list likely will change more profoundly in coming years, since CEOs of two of the seven public companies here have announced plans to retire.

Scott L. Morris, chairman and CEO of Spokane-based power company Avista Corp., announced in May plans to retire fully on March 1, 2020, but will transfer his duties as CEO to current Avista President Dennis P. Vermillion this Oct. 1.

In addition, Itron, the Liberty Lake-based maker of utility meter reading technology, announced in January that company President and CEO Philip Mezey intends to retire from the company and leave its board at the end of August. He plans to continue with the company as an adviser until the end of the year to help with a leadership transition. As of June 25, the company hadn’t announced a successor.

Mezey topped the executive pay list for the second consecutive year, with total compensation of $4.97 million in 2018. He remained the highest paid of the Inland Northwest executives despite a 15.5% decrease in pay compared with 2017.

Mezey finished just ahead of PotlatchDeltic Corp. chairman, president, and CEO Michael J. Covey, whose total compensation came in at about $4.84 million. Similar to Mezey, Covey experienced a double-digit decrease in total pay last year, with his falling by 10%.

Covey is the longtime leader of the Spokane-based forest-products company formerly known as Potlatch Corp. Potlatch completed its merger with Deltic Timber Corp. in February 2018 to become PotlatchDeltic and remains headquartered in Spokane.

Linda K. Massman, president and CEO of Clearwater Paper Corp., is the highest paid woman on the list and had the third highest total compensation overall, at about $4.06 million. While third on the list overall, Massman earned the largest annual salary of the Inland Northwest executives, at $925,000.

Her decrease in total compensation wasn’t as precipitous as the others, falling 3.6% year to year.

Massman is among seven women who were named executive officers at public companies in the Inland Northwest in 2018, representing 20% of all executives. That’s a decrease from the previous year, when nine of 40 executives, 22.5%, were women.

Avista’s Morris and Hecla Mining Co. President and CEO Phillips S. Baker rounded out the top five, with total compensation of about $3.82 million and about $3.69 million, respectively. Morris’ compensation dropped by 10% from 2017, and Baker’s pay decreased by 25.8%.

While pay decreased for nearly all of the executives listed, 24 of the 35 received total compensation that exceeded $1 million last year.