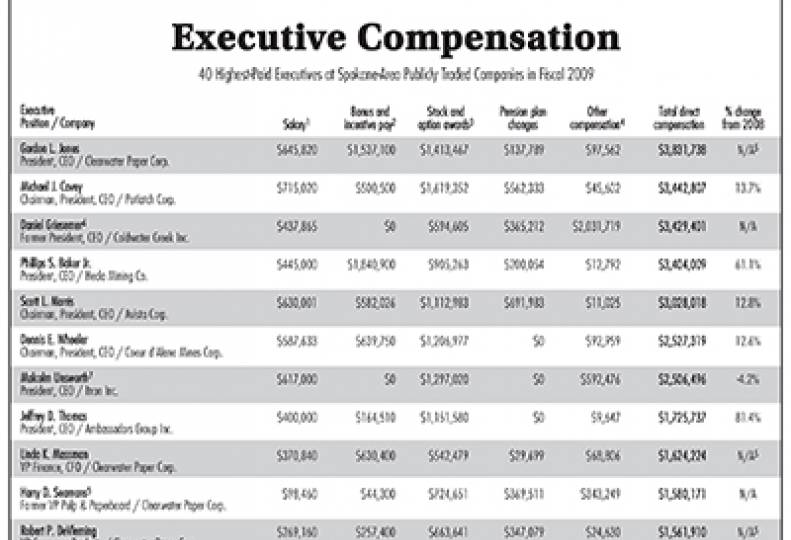 Executive compensation at publicly traded companies here grew a modest 1.9 percent on average last year amid the troubled economy, as drops in long-term incentive awards were offset by sharp growth in annual salary and bonus pay.

The relatively tepid growth in overall pay for fiscal 2009 followed a 3.6 percent drop in 2008, a year that marked the first decline in average pay since 2000, the Journal of Business' annual analysis of executive pay shows. Because pay packages for top executives now increasingly are weighted heavily on corporate performance, the impact of a beleaguered economy appears to have held overall compensation down during the past two years, following a seven-year surge of growth that averaged nearly 30 percent annually.

The Journal's executive-pay analysis this year included 86 executives from 18 publicly traded companies based in the Inland Northwest, using information those companies must disclose to the U.S. Securities and Exchange Commission in their annual proxy statements.

Those executives received average total direct compensation of $744,339 in their employers' 2009 fiscal year. Counting just salary and bonus pay, executives in the study received an average of just under $400,000. While their average salary and bonus shot up nearly 16 percent last year, all other pay—mostly long-term incentive compensation such as stock awards and pension-value gains—fell about 13 percent.

Median overall pay—the level at which there are an equal number of executives above and below—fell nearly 14 percent, compared with the 1.9 percent increase in the average. That statistical contrast might suggest the gap between the highest and lowest paid executives is growing.

New to the study this year was Spokane-based Clearwater Paper Co., which was spun off from Potlatch Corp. in late 2008. Notable, however, is the absence of Sterling Financial Corp., which hasn't yet filed a proxy statement covering 2009.

For purposes of the analysis, total direct compensation includes salary, bonuses and other annual cash incentive pay, the annual cost of long-term incentives such as stock options and restricted share grants, pension-plan changes, and perquisites. Because executives come and go, the Journal's analysis includes a different set of executives each year. Also, when a top executive leaves a company at midyear, his or her compensation isn't included in the Journal's calculation of averages.

Executives named in the disclosures include not only CEOs, but also CFOs and various vice presidents, among others. Among just CEOs, the average overall pay here last year was about $1.4 million, up 5.5 percent from 2008, while base pay—salary and bonuses—for CEOs here jumped 13.6 percent last year, to $651,431. In last year's analysis, both overall pay and base pay fell from the year earlier.

The Wall Street Journal reported in April that executives in its annual study saw their overall direct compensation edge downward by 0.9 percent. Its study, conducted by global human-resources management consultant Hay Group, included just CEOs of companies with annual sales in excess of $4 billion, and uses median pay in its report.

Analyzing executive pay of public companies can be tricky. Disclosure rules approved by the SEC in 2006 require companies to divulge more information about the compensation packages provided to their top executives, but also make total direct compensation for any given exec in a single year a little harder to grasp. For instance, amounts listed for grants of restricted stock and stock options use formulas for what the stock potentially could be worth in the future for the executive, not the compensation the executive actually pocketed that year.

Because of the new rules, the Journal of Business no longer includes the gains executives earn in a single year from exercising past stock options or having past restricted-stock awards vest, because by adhering to the new rules, companies now include the current-year cost of such gains, so adding them in again would be duplicative. Coldwater Creek President Georgia Shonk-Simmons, for instance, exercised options worth about $2.1 million last year, though that amount isn't included in her total direct compensation for 2009; rather, the current-year estimated cost of grants she might exercise in the future is listed.

Topping this year's list is Clearwater Paper President and CEO Gordon Jones, whose total compensation for 2009 was about $3.8 million. It is Jones' first year on the list, since 2009 was Clearwater's first full year as an independent company. Following Jones on the list is Potlatch Chairman, President, and CEO Michael Covey, with compensation of $3.4 million.

Ranked third is former Coldwater Creek President and CEO Daniel Griesemer, who left the Sandpoint-based retailer last fall and received about $3.4 million for the year, including about $2 million in severance.

Rounding out the top five were Hecla President and CEO Phillips S. Baker Jr., also at about $3.4 million, and Avista Corp. Chairman, President, and CEO Scott Morris, at $3.0 million.

The components of pay

With a stock option, a company grants an executive the right to buy a certain number of common shares within a set period at a specified frozen price. The exercise price is set at the market price for the stock on the day the option is granted. If the stock price then climbs, the executive can exercise the option to buy those shares at the lower exercise price, and reap a gain by selling them. With restricted stock awards, the executive receives the shares outright, but they come with restrictions on when they vest and when the executive can sell them.

To explain performance shares, it's easiest to look at an example.

Avista awards them to executives with the proviso that their true value won't be determined for three more years, and ultimately will be based on the company's total shareholder return relative to the returns reported among its peers in the S&P 400 Utility Index. So, in Avista's 2009 proxy, it reports that performance grants awarded to its CEO, Scott Morris, have a potential target value of $885,108. That amount is included in Morris' overall compensation, even though it's not guaranteed that he'll get any of that amount.

In fact, back in 2007, at the beginning of the three-year cycle that ended Dec. 31, Morris had been granted $331,167 worth of performance shares, which were included in his overall compensation number that year, but when Avista reviewed those shares after the end of the three-year period, it determined that Morris would get none of that money. That's because Avista's total shareholder return for the period was 9.6 percent, placing it in the 37th percentile among the S&P 400 Utilities Index. The company would have had to be at least in the 45th percentile for its top execs to get any of their grants; beyond that, grants are awarded on a sliding scale based on what percentile the company reaches.

In its long-term performance packages, Avista also includes some restricted-stock grants, and in Morris' case, the company awarded him $227,875 worth of common stock that vests one-third per year for the next three years, as long as he remains an Avista employee. That number and the $885,108 performance-share number are reflected under the "Stock and option awards" column for Morris on the Journal's chart.

Bonuses, by the way, also can be complicated, as Avista's proxy shows. It provides such annual, non-equity incentive compensation based on how well the company performs under six measurements, ranging from earnings per share for shareholders to customer satisfaction ratings, operating costs, and power outages. For 2009, Avista hit its targets on four of the six metrics, and thus, based on pre-determined thresholds, it paid Morris a bonus of 92 percent of his salary and the other top execs between 51 percent and 62 percent of their salaries.

Some companies no longer offer stock options to executives, but many still do, and there are a lot of unexercised shares sitting out there on which executives still could cash in. In this year's analysis, executives had accumulated options to buy an average of 151,038 shares each of their companies' stock. Given the decline in stock value some companies here have suffered, however, some unexercised options that executives have been granted currently are worthless, since the option price is greater than the stock's current price.

For instance, Ambassadors CEO Jeffrey Thomas is eligible to exercise the option on nearly 300,000 shares of the company's common stock for which the exercise price is higher than the current trading price, making them of no value for the time being. Some of his options are priced at $27.46 a share, significantly more than the $11 a share Ambassadors' stock has been trading at recently.

Another item companies now must disclose in their main compensation tables is the change in value in each executive's pension plan. In most cases, those increases are relatively modest, usually less than $75,000, but sometimes they can be in the hundreds of thousands of dollars.

One of the types of executive pay that seems to raise the ire of shareholders nationally is perks, though examples of extravagance are hard to find among the proxies of the Inland Northwest companies studied in this analysis. Typically, such perks include matching contributions to 401(k)s, medical and life-insurance premiums, moving expenses for new hires, and sometimes club memberships and auto allowances.

Public companies also now provide much more disclosure on how much compensation an executive would receive if he or she left the company for specific reasons. For instance, if Coeur d'Alene Mines CEO Dennis Wheeler leaves the company involuntarily but without cause, he would receive roughly $8 million; if he leaves subsequent to a change in control at Coeur, he would receive even more, about $12.2 million.

Because much of an executive's pay these days is dependent on the financial performance of his or her employer, some companies—and some industries—paid their execs more last year than others did.

The top execs at Hecla, for example, saw their pay jump about 53 percent last year, while the average executive pay at Itron fell about 57 percent. Hecla had a tremendous recovery in 2009, ending the year with $54 million in earnings, compared with a loss of $80 million the previous year. Itron, on the other hand had a tough 2009, finishing with a loss of $2.25 million, compared with net income of $19.8 million in the previous year.

When Coldwater Creek co-founder Dennis Pence returned from retirement to succeed departing CEO Daniel Griesemer last September, he signed on for a 2009 salary of $1, with no bonus or other long-term pay.

Because overall compensation now often is based on multiple years of corporate performance, a company's earnings in a single year appear to have less of an overall impact on pay increases and decreases. Still, it's notable that collectively, the companies included in this year's analysis had an average increase in net income of about 105 percent during 2009.

In terms of industries, executive pay grew, on average, in the natural resources, travel, and utility sectors, while pay in the finance, high technology, and retail sectors fell.